Your Dog Is Probably Dumber Than a Wolf, And Here's Why

Wolves have an understanding of cause-and-effect that domesticated dogs do not - and they're just as good as dogs at following directions given by a human.

This difference in cognition may have something to do with the domestication process, according to researchers from the Wolf Science Centre at the University of Veterinary Medicine in Vienna.

There are several ways of gauging animal intelligence, and a common one is tests for comprehension of cause and effect.

Crows, for instance, known to be highly intelligent, have demonstrated that they understand this concept very well, dropping stones in a tube of water to float a treat to the top, where they can reach it.

Some parrots do as well, able to comprehend that pulling on a string in a specially devised test delivers them a food treat.

Cats can understand cause and effect, but apparently only in certain circumstances. And dogs can be trained by humans that certain behaviours will result in a certain outcome, but apparently they're not as good at figuring it out on their own.

To see how well dogs and wolves could reason, the research team tested 14 dogs living in a pack and 12 human-socialised wolves. They also conducted the test on an additional 12 dogs living as pets.

"Our study is unique as it does not only compare dogs and wolves living under identical conditions, with a same history and training regime, we also compared dogs living in packs to pets living with their human families," said animal psychologist Juliane Bräuer from the Max Planck Institute for the Science of Human History in Germany.

This means the study was able to determine if the different living conditions play a role in dogs' causal understanding.

The test involved pairs of containers. One had a food reward inside, the other was empty. The animals were shown three sets of cues to determine which container had the food. 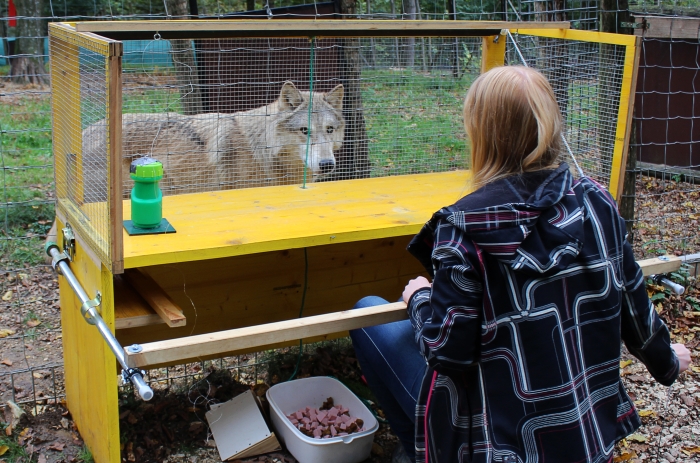 The first was a communication cue, in which the human made direct eye contact with the animal while pointing to the correct container.

The second was a behavioural cue, in which the human pointed at or sniffed the correct container, but didn't make eye contact.

The third was a causal cue, where, in the absence of a human, the correct container made a noise when moved.

The wolves and both sets of dogs were able to correctly choose the food container when given communication cues. With the behavioural cues, all animals failed the test.

But in the last test, the causal cues, there was a clear difference. The wolves could find the food, and the dogs had a much harder time, both pet and pack.

"The results of our study suggest that domestication has affected the causal understanding of our dogs," said biologist Michelle Lampe from Radboud University in the Netherlands.

But, she added, that doesn't necessarily mean wolves are inherently more intelligent than dogs.

"It cannot be excluded … that the differences can be explained by the fact that wolves are more persistent to explore objects than dogs. Dogs are conditioned to receive food from us, whereas wolves have to find food themselves in nature."

But there is something else that's interesting to note - that wolves were just as good as dogs at understanding communication cues from humans. This may provide some insight into how domestication originally came about.

As Bräuer notes, "The wolves' ability to understand human communicative cues after being socialised with humans may have made it possible to become domesticated."