The remains of an ancient female child, no more than two months of age, have been found lavishly decorated with pendants and beads in northwest Italy.

The precious skeleton was discovered in the Arma Veirana cave in 2017 and has now been dated to about 10,000 years old. This time is known as the early Holocene, a cultural period from which well-documented burials are exceedingly rare.

Despite the skeleton being heavily damaged, the few remaining teeth strongly suggest the child was female. Given the sheer number of ornaments surrounding her body, archaeologists suspect the community valued prehistoric infants, regardless of age or sex.

"Thus," the authors write, "child funerary treatment provides important insights into who was considered a person and thereby afforded the attributes of an individual self, moral agency, and eligibility for group membership." 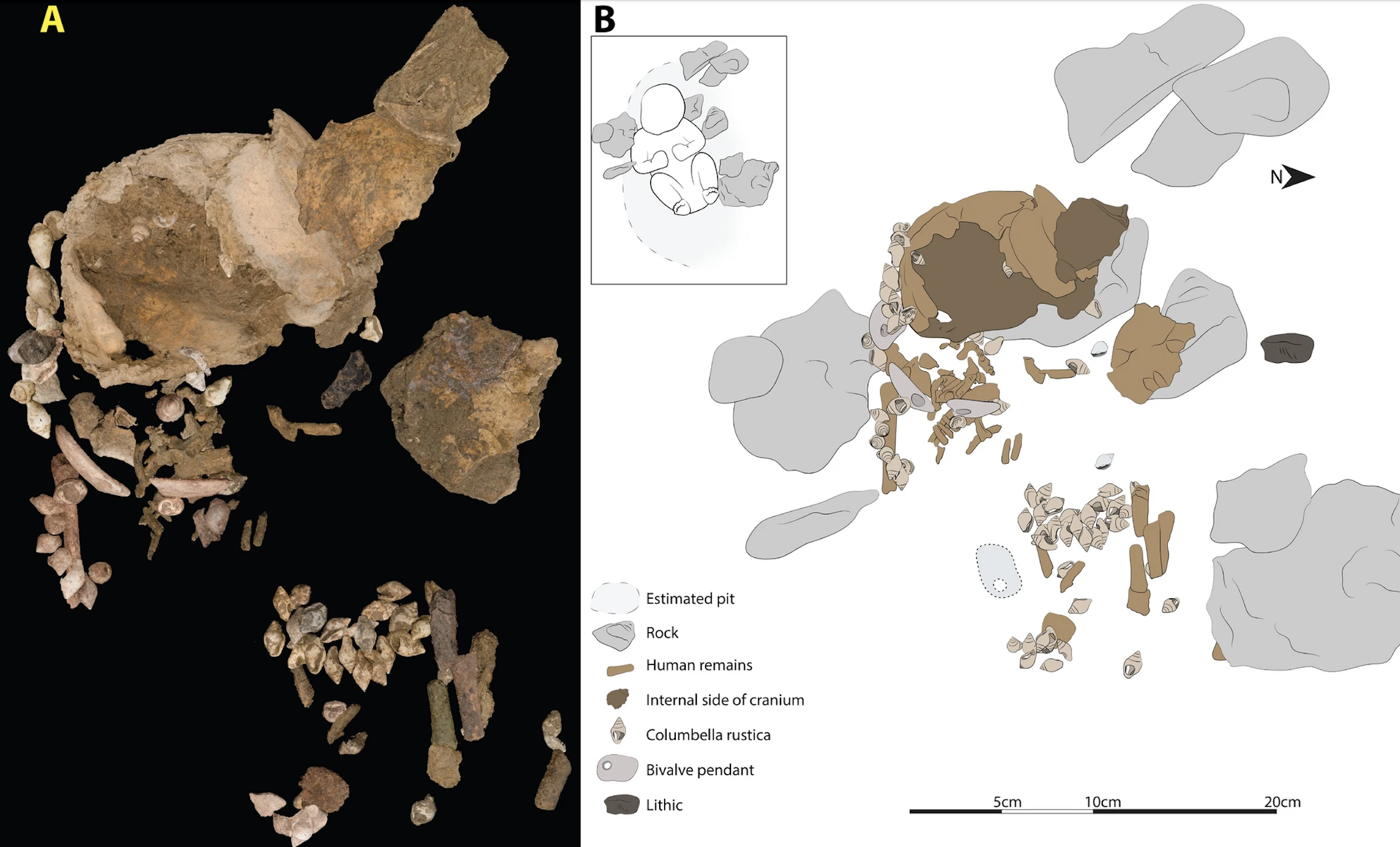 Above: Burial layout. (A) Reconstructing the bones and artifacts as they were in situ. (B)

The child, nicknamed "Neve", isn't the oldest example of an infant burial, but it is the oldest European infant documented to be female.

More ancient bones, from as far back as 80,000 years ago, have been degraded to the point where it's tougher to determine the sex of the deceased.

The lack of infant burials in Europe from 22,000 to 33,000 years ago has been interpreted by some archaeologists as a sign that ancient societies did not see the youngest humans as 'people'.

This argument rests on the fact that infants were dying so often at this time, society could not expend the emotional energy to bury each and every one.

It's an interesting idea, but it could also be based on several misinterpretations of what is, at best, a patchy fossil record.

Most discovered infant burial sites from thousands of years ago suggest the children were laid to rest with the utmost respect and care.

Researchers found Neve adorned with at least 66 shell ornaments and 3 pendants, all of which had a hole chiseled out of them. This suggests the decorations were used as beads, possibly sewn onto a blanket, hood, or skirt that disintegrated over time.

"Preliminary experiments estimate manufacture of all the ornaments required 8-11 person hours, not including time needed to collect shells and sew the beads onto a garment," the authors write.

Above: Ornaments associated with Neve, including shell beads (a–l) and pierced pendants (m-p).

Other artifacts found at the site include ochre, flint, and the claw of an eagle-owl, which sat about 20 centimeters from the infant in what looked like a connected pit.

It's not clear if all these gifts 'belonged' to the child, or if they were simply remnants of previous cave use. However, a specific flake of flint sat so close to the infant's head that experts suspect it was put right next to the body on purpose.

While we can't know if Neve's burial in Italy was common throughout Europe in the early Holocene, there is reason to suspect it might have been.

The way in which Neve was laid to rest closely matches another ancient female infant, buried at six weeks of age on the land bridge that once connected Europe to North America.

This child burial dates to roughly 11,500 years ago. Together, the two sites suggest the treatment of baby girls following death might have been quite similar in European cultures at the end of the Pleistocene and the beginning of the Holocene.

"This implies that infant personhood inclusive of females has deeper origins in a common ancestral culture or that it arose in parallel in nearly contemporaneous populations across the planet," the authors write.

"Either way, the terminal Pleistocene and earliest Holocene should be considered the minimum antiquity for the recognition of young girls as members of society in cultures around the globe."

Love has a way of lasting for millennia.