Astronomers Just Announced The Discovery of 12 New Moons Around Jupiter

Astronomers looking for stuff in the outer Solar System have received a huge and unexpected surprise - the accidental discovery of 12 previously unknown moons in orbit around Jupiter.

This brings the total of known Jovian moons to 79. The newly discovered satellites increase Jupiter's lead in the Solar System as the planet with the most moons - although the space around Saturn is pretty crowded, too.

The team, led by astronomer Scott S. Sheppard of the Carnegie Institution for Science, was actually using ground-based telescopes to look for evidence of the mysterious Planet Nine, a proposed outer Solar System body.

"Jupiter just happened to be in the sky near the search fields where we were looking for extremely distant Solar System objects," Sheppard said.

They were using a more powerful telescope than ever before, allowing the team to peer in at higher resolutions, across a wider field of view than other observations in the past.

Because Jupiter moves across the sky at a known speed, anything nearby moving at the same speed in the same direction becomes a candidate for a moon - but confirmation is a time-consuming process, Sheppard explained to ScienceAlert.

"We had to observe the new candidate Jupiter moons again a month later and again a year later to confirm they were actually orbiting Jupiter and thus were moons of Jupiter," he said.

"This is really cool and really exciting," astronomer Jonti Horner of the University of Southern Queensland, who was not involved in the research, told ScienceAlert.

"It's not hugely surprising to me, I think as we look deeper, we'll find more of these irregular satellites around Jupiter, Saturn, Uranus and Neptune, but it is cool, and it's great that they've found so many all at once."

Based on the team's observations, Gareth Williams at the International Astronomical Union's Minor Planet Center was able to calculate the orbits of the moons. Nine of them, found in the most distant orbits of Jupiter, are in three distinct groups, taking around two Earth years to orbit Jupiter.

They also have a retrograde orbit, or the opposite direction to the spin of Jupiter on its axis. This is not unusual - in fact, most of Jupiter's known moons are retrograde, and are thought to be asteroids or comets originally formed near the gas giant and captured when they got too close.

"These moons are the last remnants of the building blocks of the giant planets as all other material in the giant planet region likely fell into the planets to help form them," Sheppard said.

"We think there were originally only three retrograde moons and they were each broken apart through collisions with other objects. What these other objects were has been a mystery."

But one of the newly discovered moons - and the strangest - offers a fresh clue. Of the twelve, only three moons orbit in a prograde direction, and are closer to Jupiter.

Two of them are pretty straightforward. They are part of a larger group, all with similar distances and angles of inclination, taking little less than a year to orbit Jupiter. Astronomers believe they were once all part of a larger moon that broke apart.

But the last moon is a weird one.

"Our other discovery is a real oddball and has an orbit like no other known Jovian moon," Sheppard said. 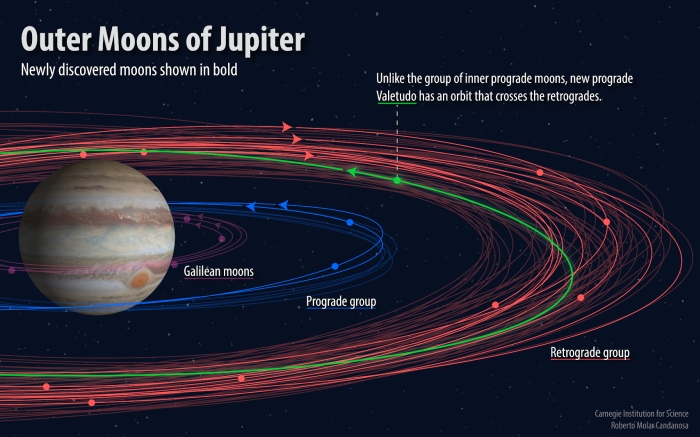 Tentatively named Valetudo, after the Roman goddess of health and cleanliness, and great-granddaughter of Jupiter, the moon is more distant and more inclined than the group of inner prograde moons.

It takes around 18 months to orbit Jupiter, and its orbit passes that of the retrograde moons, which makes collisions pretty likely.

"With the discovery of Valetudo, it seems the collisions that broke apart the retrograde moons were between other prograde Jupiter moons, like Valetudo," Sheppard told ScienceAlert.

The team believes Valetudo might be a fragment of a larger moon, broken off in a collision with a larger retrograde moon, resulting in something like the retrograde groupings observed.

"What's really cool for me here is what they're calling their oddball," Horner told ScienceAlert. "Not because of its orbit, but rather because it's so small."

According to Horner, if Valetudo had formed early on, it would have been slowed by the gas and dust present at the formation of Jupiter, and fallen into the planet.

The team's results are not yet available in a peer-reviewed journal, as Sheppard's team is currently running supercomputer simulations to try and figure out how often Valetudo might collide with a retrograde moon.

"This simulation takes a few months to run and we expect the answer is between about 100 million years and 1 billion years, which is long in human time but not all that long in astronomical time," Sheppard said.

"A full paper will likely be written after these simulations are done in a few months."

The newly discovered moons await naming, a task for which the public may be enlisted, so it's a good idea to brush up on the IAU's naming rules for Jovian moons - and which names have already been taken.

"It's a lovely result, and it really does highlight the importance of keeping looking out there," Horner said.

"I like the serendipity of it as well - it also highlights how you can use observations looking for one thing to also look for others."