There Were Over 12,000 Poison Control Calls For People Eating Laundry Pods Last Year

Tide Pods are the Internet's breakout meme of early 2018. For those of you not in the know, the joke is that brightly coloured laundry detergent pods look like delicious fruity candy so maybe we should, you know, eat them.

To be clear, you should not eat them.

"You're really taking a chance – and to what end?" Alfred Aleguas of the Florida Poison Information Center told The Washington Post earlier this month. "It's pretty foolish behavior."

The Consumer Product Safety Commission warned that "a meme should not become a family tragedy." Tide partnered with New England Patriots tight end Rob Gronkowski to issue a PSA.

But Tide Pods are not exactly a breaking public health emergency. In fact, data from the American Association of Poison Control Centers (AAPCC), which compiles up-to-the-minute numbers on poison control calls, shows that detergent pod poisonings are actually trending downward.

In 2017, there were 12,299 calls to US poison control centres due to exposure to laundry pods, according to AAPCC's latest data. That number is actually down by about 14 percent since 2015, when there were over 14,000 calls. 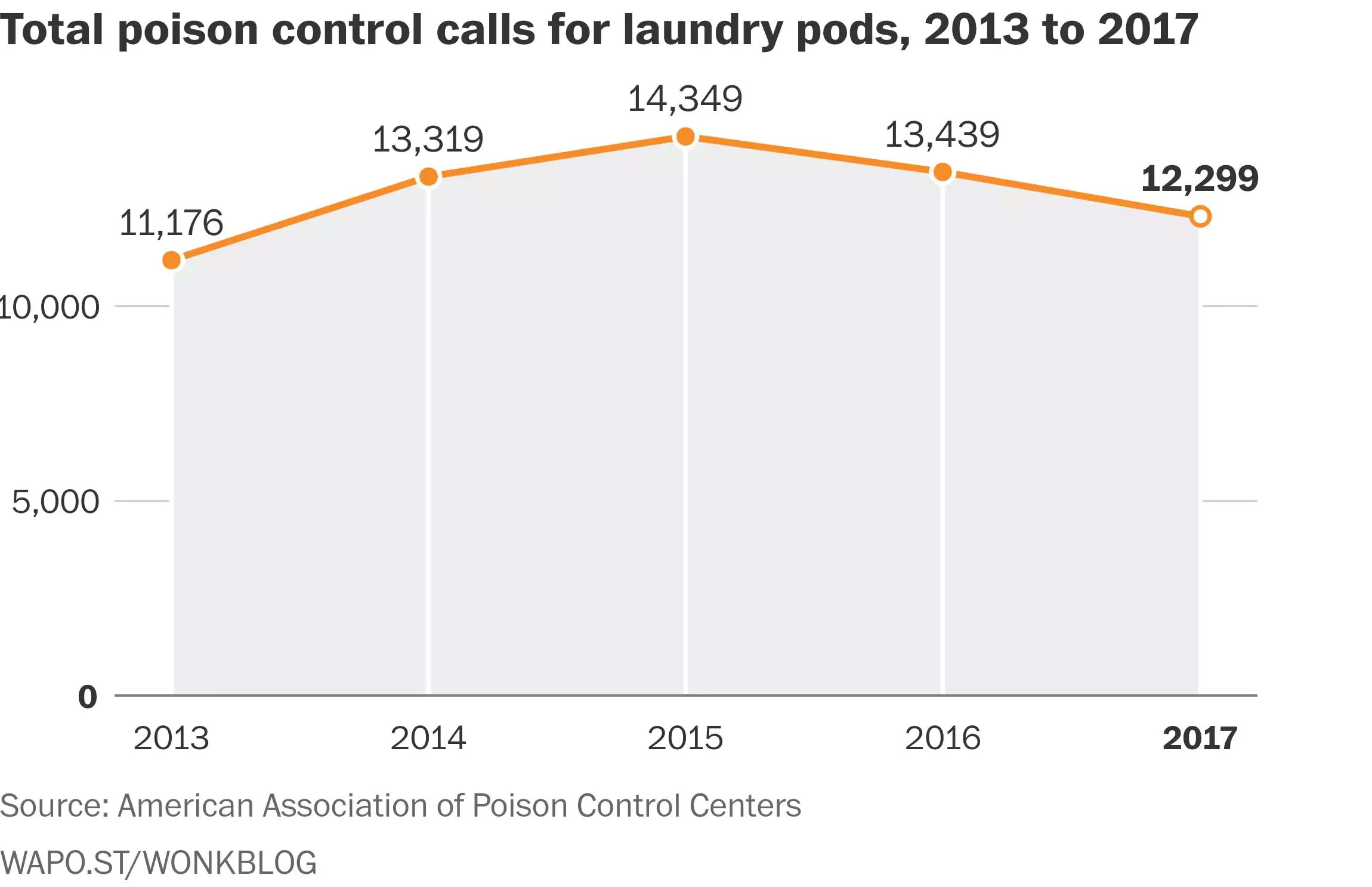 A couple things to keep in mind. First, while 12,000 poison control calls sounds like a lot, it's well within the range of calls for a lot of other common household products. In 2016, for instance, there were over 20,000 calls related to hand sanitisers, 17,000 for toothpaste exposure, 16,000 for deodorants and 13,000 for mouthwash.

As is the case for laundry pods, the overwhelming majority of calls for these products were due to kids age 5 and under.

Second, not every call represents an actual ingestion of a laundry pod. A parent may call poison control because they suspect their kid ate something harmful but aren't really sure, for instance. That call still gets logged in the database.

Notably, of the 13,000-plus laundry pod calls in 2016, only about 5,000 resulted in someone requiring treatment in a medical facility. And only about 700 of those resulted in a "moderate" or "major" risk to the individual's health.

That's still more sick kids than anyone wants to see, of course. But in a country where you've got 20 million kids under the age of 5 living in households full of bright, colourful, non-edible products, it's to be expected.

Finally, as I noted above, laundry pod exposures are actually trending downward. That could be a sign that as consumers become more familiar with the product, they're getting smarter about keeping it away from their kids.

This year could bring fresh new detergent horrors, of course. But as The Post's Lindsey Bever points out, before teens were doing the Tide Pod challenge they were chugging milk by the gallon, eating heaping spoonfuls of cinnamon, lighting themselves on fire and throwing boiling water at each other.

The Republic survived each of these crises. It will probably survive Tide Pods too.

AAPCC reminds you that if you think your child has ingested laundry pods, diaper cream, mouthwash or deodorant, you can call the national poison help hotline at 1-800-222-1222 or text POISON to 797979 to save the number in your phone.