A 130-million-year-old fossil has revealed that the ancient super-continent Pangaea may have broken apart more slowly than scientists previously thought.

The fossilised skull, which was found in eastern Utah, has revealed an entirely new group of reptile-like mammals that existed in North America.

"Based on the unlikely discovery of this near-complete fossil cranium, we now recognize a new, cosmopolitan group of early mammal relatives," said lead author Adam Huttenlocker from the University of Southern California.

The newly-found species has been named Cifelliodon wahkarmoosuch in honour of the famed palaeontologist Richard Cifelli and the local Ute tribe's word for "yellow cat".

Using high-resolution computed tomography (CT) scanners, the researchers estimated that the creature weighed up to 2.5 pounds (1.1 kg) and was probably the size of a small hare – a giant among its contemporaries at the time.

(Keck School of Medicine of USC/Jorge A. Gonzalez)

While the animal's large olfactory bulbs indicate it had a strong sense of smell, its eye sockets were tiny, suggesting it had poor eyesight and colour vision. This means the animal was probably nocturnal and depended on its smell to root out food.

"The skull of Cifelliodon is an extremely rare find in a vast fossil-bearing region of the Western Interior, where the more than 150 species of mammals and reptile-like mammal precursors are represented mostly by isolated teeth and jaws," said palaeontologist and study co-author James Kirkland.

As if the discovery is not remarkable enough, the fossil has significantly changed our understanding of mammal evolution.

"For a long time, we thought early mammals from the Cretaceous (145 to 66 million years ago) were anatomically similar and not ecologically diverse," Huttenlocker said.

"This finding by our team and others reinforce that, even before the rise of modern mammals, ancient relatives of mammals were exploring specialty niches: insectivores, herbivores, carnivores, swimmers, gliders.

"Basically, they were occupying a variety of niches that we see them occupy today." 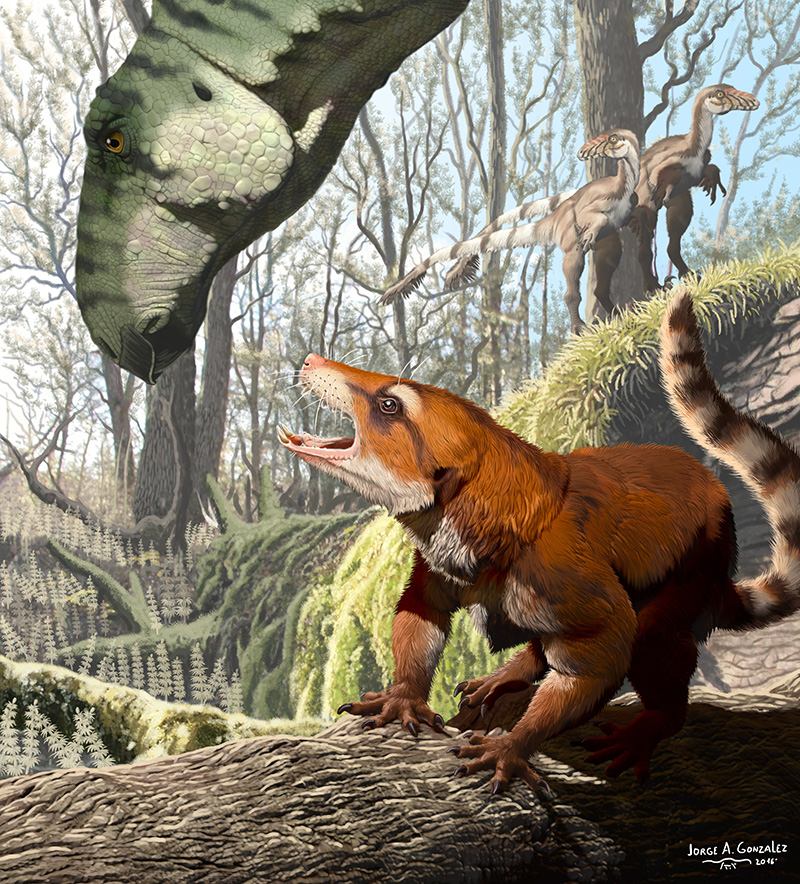 (Keck School of Medicine of USC/Jorge A. Gonzalez)

The discovery also changes the time frame during which extinct mammal ancestors, called Haramiyida, dispersed across the continents.

Most of the haramiyidan fossils that scientists have uncovered so far have been from the Triassic and Jurassic of Europe, Greenland and Asia. But this one was the first large skull from Early Cretaceous (145 to 101 million years ago) North America.

This means haramiyidans must have existed globally during the Jurassic-Cretaceous transition.

It follows that the corridors of migration between Pangea's landmasses must have remained intact right up through the Early Cretaceous.

According to the continental drift hypothesis, Pangaea began breaking up about 225-200 million years ago. The new study suggests the divide of Pangea took about 15 million years longer than previously thought.

While the corridors of migration were open, early mammal precursors must have migrated from Asia to Europe, and then into North America and the major Southern continents.

The researchers placed Cifelliodon in the subgroup Hahnodontidae, which, up until this point, was only made up of Cretaceous species from Northern Africa.

"But it's not just this group of haramiyidans," Huttenlocker said.

"The connection we discovered mirrors others recognised as recently as this year based on similar Cretaceous dinosaur fossils found in Africa and Europe."

The Cifelliodon skull is just another piece in the puzzle.