Young People Are Gaining Ground in The Climate Wars. Here Are 14 Hopeful Signs

News on the climate change front is dire. The oceans are hotter than they have been in recorded history. Last year was the fourth-warmest year on record. Greenland's ice is melting six times faster than it did in the 1980s, and sea-level rise is already affecting coastal economies.

But amidst these concerning trends, there is still cause for hope, according to environmental activist and author Bill McKibben.

McKibben, who founded the climate organisation 350.org, recently published a new book called "Falter." He told Business Insider that his hopefulness comes from seeing millennials and Gen Zers push for action across the globe.

This younger generation overwhelmingly favours policies and initiatives that reduce carbon emissions. A 2018 Pew study showed that 81 percent of millennials believe the planet is indeed warming, and that 65 percent of those millennials say human activity is the primary cause.

That's about 10 percent more than the general public. Millennials also factor climate change into their decisions at the polls, according to the Pew data.

In the last eight months, McKibben said, the mainstream tide has seemed to shift in the climate change battle, toward a position more closely aligned with that of young people. The belief that governments should take more initiative in addressing the climate threat has started to permeate across the globe.

In this recent time period, there have been worldwide climate strikes, aburgeoning Green New Deal in the US Congress, and the nomination of a 16-year-old climate activist for the Nobel prize.

"We're in a climate moment right now," McKibben told Business Insider, adding, "All these things started to combine to produce this new moment where people are open to change."

Here are the reasons McKibben thinks young people are gaining ground in the fight. 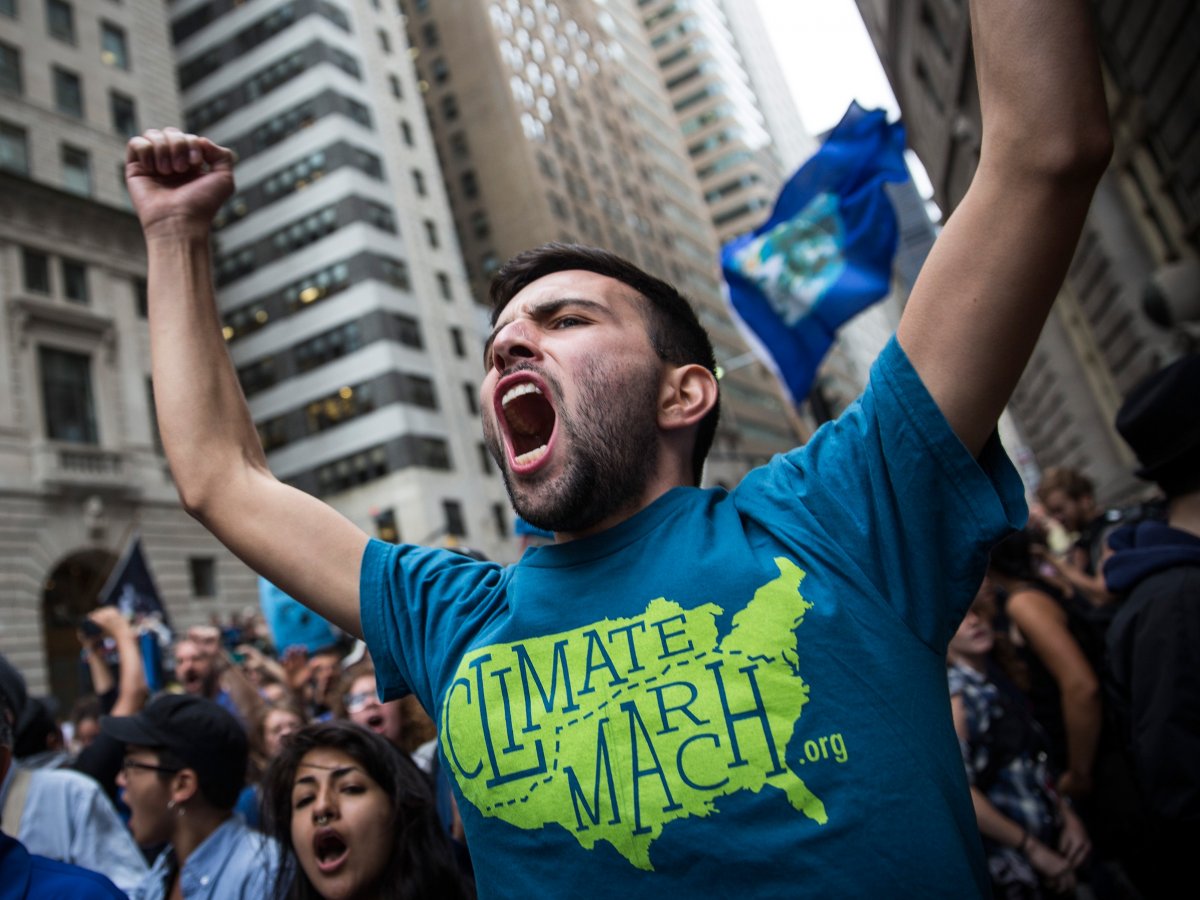 1. McKibben pointed to the October 2018 report from the Intergovernmental Panel on Climate Change (IPCC) as the catalyst for this current "climate moment."

According to that report, limiting warming to 1.5 degrees Celsius above pre-industrial levels would necessitate "rapid and far-reaching" transitions in energy sources, infrastructure, industry, and transportation. Carbon emissions would have to drop by 45 percent from 2010 levels in the next decade or so.

If that doesn't happen, dry regions would be much more likely to experience severe drought, and areas prone to heat waves or intense hurricanes would get more of those disasters, too. Most coral reefs would die, and melting Arctic ice would cause sea levels to rise dramatically.

These changes could trigger huge migrations of people and mass extinctions of animals.

The IPCC suggested we'll see those effects in just over 20 years unless major changes are implemented. The report "reflected a new urgency," McKibben said.

2. Shortly after that report came out, California was hit by the deadliest and most destructive wildfire in the state's history. For McKibben, that fire might have pushed our collective psyche over the edge.

The Camp fire destroyed 240 square miles of forest and towns in November 2018. It leveled the town of Paradise and caused $US16.5 billion in damages.

The severity of the Camp Fire was linked to climate change, since a shortage of rainfall and drier autumn conditions in California gave the flames more fuel. Indeed,12 of the 15 biggest fires in California's history have occurred since the year 2000.

3. "When you watch a city called Paradise literally turn into hell inside half an hour, it's hard to unsee it," McKibben said.

According to the US National Climate Assessment – the fourth in an ongoing series of climate reports mandated by a 1990 law – the area of the western US burned by wildfire from 1984 to 2015 was twice the amount that would have burned without any climate change.

On November 13, 2018, before Ocasio-Cortez was sworn in, she joined activists in a demonstration outside Rep. Nancy Pelosi's office to call for a Green New Deal. The protesters were from the Sunrise Movement, a group of young people who advocate for climate-change policy.

Since then, Ocasio-Cortez and Senator Ed Markey of Massachusetts introduced a Green New Deal resolution in the House and Senate on February 7.

Ocasio-Cortez and Markey's plan calls for a series of "10-year national mobilizations" to address climate change, with the ultimate goal of meeting 100 percent of the country's power demand through clean, renewable energy sources and cutting greenhouse-gas emissions to net-zero.

To accomplish those goals, the plan would require major changes to US infrastructure, electricity grids, and transportation systems to make them more sustainable and energy-efficient. In the process, those projects would ideally create jobs. 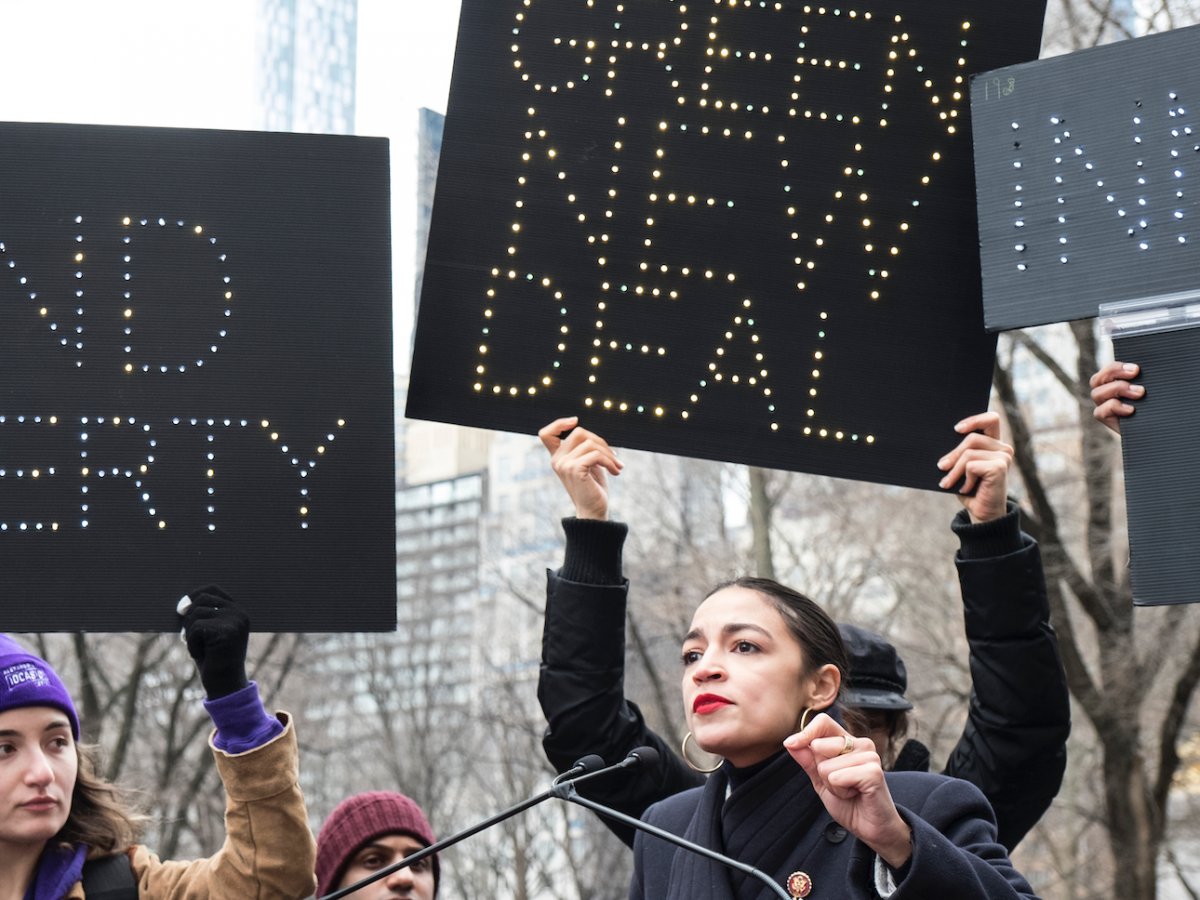 5. The Green New Deal has since stagnated in Congress, but McKibben thinks "it's off the ground in a profound way."

"The Green New Deal is the first set of proposals about climate change that are on the same scale as the problem," McKibben said.

As 2020 presidential candidates start throwing their hats into the ring, the idea of a Green New Deal is leading the issue of climate change to get more attention from those running for office. Democratic senators Cory Booker, Amy Klobuchar, Elizabeth Warren, Kamala Harris, and Kirsten Gillibrand have all voiced support for a Green New Deal.

6. In March, Greta Thunberg, a young Swedish climate activist, was nominated for the Nobel Peace Prize.

The ninth grader emerged onto the international scene in November 2018 as the voice and face of the growing global School Strike for Climate movement. Thunberg staged a strike for two weeks outside the Swedish parliament, demanding that the government cut emissions by 15 percent a year.

Now, the 16-year-old spends every Friday on strike from school.

In December, Thunberg spoke at the 2018 United Nations climate change conference in Katowice, Poland, where she accused the assembled leaders from nearly 200 countries of "behaving like children," according to The Guardian.

"This is the biggest crisis humanity has ever faced," she told UN secretary general António Guterres before the conference started. "First we have to realise this and then as fast as possible do something to stop the emissions and try to save what we can save."

Greta Thunberg in front of the Swedish parliament with sign that says: 'School strike for climate.' (Anders Hellberg/Wikimedia Commons)

7. On March 15, more than a million students around the world followed Thunberg's lead, walking out of their Friday classes to protest inaction on climate change.

Young people in more than123 countries skipped school to demand more robust climate policies and the reduction of greenhouse-gas emissions.

Thunberg spoke at the Stockholm demonstration.

"We have only been born into this world, we are going to have to live with this crisis our whole lives. So will our children and grandchildren and coming generations," she said, according to Reuters.

"We are not going to accept this. We are striking because we want a future and we are going to carry on."

9. Thunberg's notoriety has continued to grow since then.

On April 17, 2019, Thunberg briefly spoke with Pope Francis during the weekly general audience at the Vatican. The world leader of the Catholic Church has made it clear that he strongly supports action to curb climate change.

"Thank you for standing up for the climate and speaking the truth. It means a lot," Thunberg told the Pope.

"God bless you, continue to work, continue. Go along, go ahead," he responded.

A week later, Thunberg spoke to UK parliament leaders: "Many of you appear concerned that we are wasting valuable lesson time, but I assure you we will go back to school the moment you start listening to science and give us a future. Is that really too much to ask?"

10. As youth climate strikes have gained momentum, other environmental groups have also taken to the streets.

Earlier this month, Extinction Rebellion activists from Los Angeles to London were arrested for shutting down traffic on busy streets and gluing themselves to trains, buses, and public landmarks.

The London protesters, buoyed by an appearance of Thunberg at an April 21 rally, occupied Oxford Circus, Marble Arch, Waterloo Bridge, and Parliament Square.

On Earth Day, April 22, more than 1,000 people were arrested in the UK capital, in what The Guardian called "the biggest civil disobedience event in recent British history." 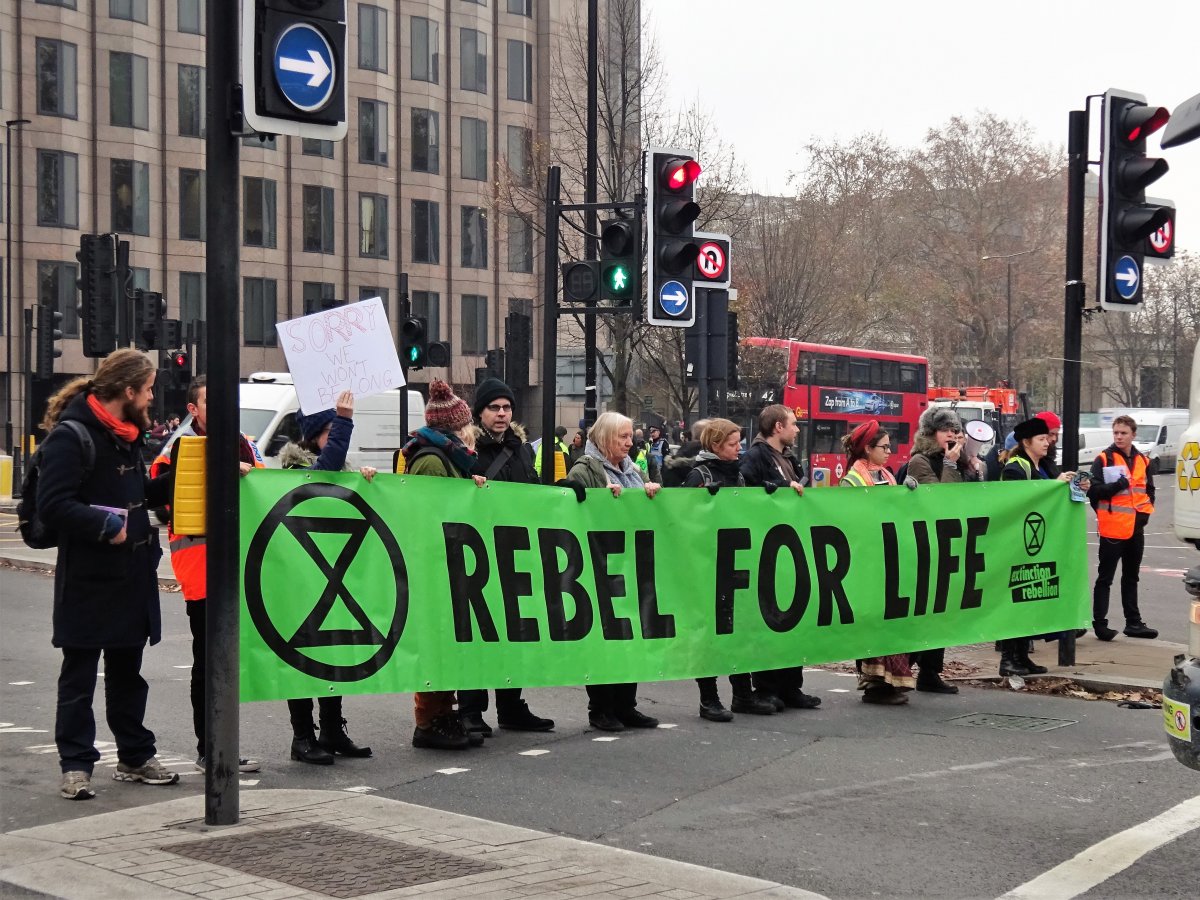 11. McKibben thinks this type of nonviolent protest is the key to spurring action to combat climate change.

"The suffragettes, Gandhi, Martin Luther King Jr. – they all figured out that unearned suffering was a tool that you could use to build movements, movement that could allow the many and the small to counterbalance the mighty and the few," McKibben said.

12. The fight against the Keystone XL pipeline in 2018 was another notable example, McKibben said.

President Barack Obama delayed construction on the pipeline in 2015, but in January 2017, President Donald Trump took action intended to permit the pipeline's completion.

13. A growing group of young women concerned about climate change are trying a different tactic to raise awareness about the threat: They're choosing not to reproduce.

These women, who call themselves BirthStrikers, have all declared that they will not bear children "due to the severity of the ecological crisis and the current inaction of governing forces in the face of this existential threat," according to the group's manifesto.

14. Yet another group of young people have gone to court in an attempt to address the climate change problem.

In the landmark lawsuit, Juliana v. United States, 21 young people are suing the US government seeking to compel it to protect essential natural resources by addressing carbon emissions.

The plaintiffs, represented by the non-profit organisation Our Children's Trust, are asking the government to adopt methods to reduce greenhouse-gas emissions. The US government is desperately trying to get the case dismissed, but it's currently scheduled to begin in June in Portland, Oregon.

McKibben doesn't think that a climate disaster is inevitable. "Scientists gave us a remarkably clear warning, engineers gave us the technology to get out of it, so now we just need to get out," he said.