Nearly 25% of The World's Population Faces a Water Crisis, And We Can't Ignore It

Within the past hundred years, water use has been growing at more than twice the rate of the human population. As water supplies continue to shrink, some parts of the world are facing a looming crisis.

As of 2019, 17 countries in total are now experiencing "extremely high" levels of baseline water stress, according to recent data from the World Resources Institute (WRI).

This, in essence, means that nearly one-quarter of the world's population - around 1.7 billion people - currently lives in areas where agriculture, industries and cities withdraw 80 percent of their available water supply every year.

In such a vulnerable state, even a small dry spell could be enough to cause a crisis. And these dry events, scientists agree, are only going to get worse with climate change.

"Water stress is the biggest crisis no one is talking about," claims Andrew Steer, president and CEO of WRI, in a recent press release.

"Its consequences are in plain sight in the form of food insecurity, conflict and migration, and financial instability."

Using a new hydrological model, which paints a more accurate picture of water risk than ever before, WRI researchers have calculated that global water withdrawals have more than doubled since 1960.

It's a growing demand that shows no signs of slowing, and it's starting to get away from us. Today, WRI's Aqueduct tool has identified no less than 44 countries experiencing "high" levels of water stress. That's roughly a third of the planet whose available water supply is depleted by on average 40 percent annually.

"A new generation of solutions is emerging, but nowhere near fast enough," adds Steer. "Failure to act will be massively expensive in human lives and livelihoods."

Last year, Cape Town's water supply teetered on the brink of "Day Zero". This year, the city of Chennai in India is close to running out of water. While there is currently no global water scarcity as such, the United Nations says an increasing number of places are chronically short of water.

Using peer-reviewed data to map water risks such as floods, droughts and stress, WRI has ranked water stress, drought risk, and riverine flood risk across 189 countries and their sub-national regions, like states and provinces.

The results clearly highlight the Middle East and North Africa as the most water-stressed region on Earth by far. In fact, 12 out of the top 17 most water stressed countries listed by WRI were located in this hot and dry region, collectively known as MENA. Qatar, Israel, and Lebanon ranked in the top three. 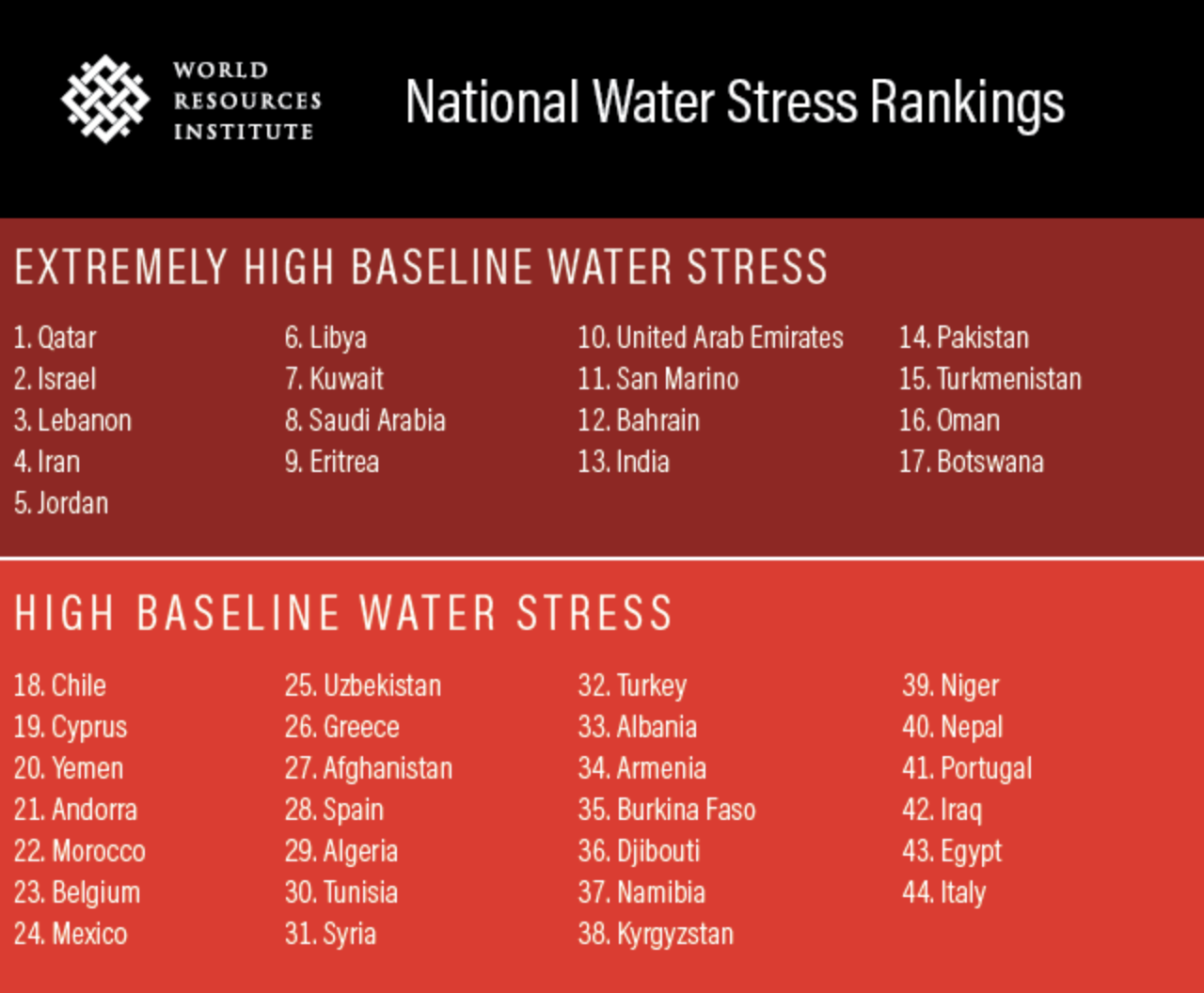 India is the first country outside of MENA to show up on this list, although that doesn't necessarily mean its water issues are any less dire. Water stress is just one dimension of water security; management is another.

With 1.3 billion people, India alone holds more than three times the population of the other 16 countries in the list, and Chennai's water management problems are just the tip of the iceberg.

"India can manage its water risk with the help of reliable and robust data pertaining to rainfall, surface, and groundwater to develop strategies that strengthen resilience."

In MENA, the problem has more to do with recycling wastewater. Over 80 percent of MENA's water is not reused, so if these countries create infrastructure around this idea, it could create a whole new source of clean water.

Australia is a good example of how effective management can save a country on the brink of water stress. On the way to its own Day Zero during a millennium drought, the nation nearly halved its domestic water use. That said, the country still experiences severe drought issues exacerbated by climate change.

But looking at these problems country by country isn't necessarily the best way to view the problem. While the United States ranked fairly well for water stress overall, for instance, the state of New Mexico had "extremely high" pressure on water availability. It was actually similar to the United Arab Emirates and Eritrea.

And soon, this one state will have more company. A study in the US from earlier this year, predicted that in just five decades, the central and southern Great Plains, the Southwest and central Rocky Mountain States, California, and areas in the South and the Midwest are likely to experience significant water shortages.

"In future periods, as population and economic growth plus the changing climate alter water yield and demand, shortages are projected to increase substantially, in the absence of adaptation measures, with many of the 14 futures we examined," the researchers of the study explain.

Nor will the US be alone in this grim future. Researchers at MIT say roughly half the world's projected 9.7 billion people will live in water-stressed regions by 2050.

If the world doesn't improve its agricultural efficiency, decrease its water use and recycle and reuse wastewater, water scarcity could be a permanent stress of the future.