An Adorable 18,000-Year-Old Puppy Has Been Found Extremely Well Preserved in Siberia

If you were just to look at his head - eyes closed, chin resting gently on the surface in front of him, with slightly outstretched paws - you might think the puppy were only sleeping.

But the tiny canine, newly delivered from the permafrost in Yakutsk in eastern Siberia, died 18,000 years ago, at the tender age of just two months old.

He's so perfectly preserved that his whiskers, eyelashes, nose and much of its fur are in good condition - as though he'd died only recently. Part of his rib cage and spine is exposed, and cause of death is yet to be determined, but from the position of the body, he was not in any distress at the time.

Carbon dating revealed how long ago he lived, and genetic testing revealed his sex. But as for what type of dog he is? That's less clear.

We know he's a canine, but refining it further is proving really tricky.He could, geneticists say, be a wolf. Or, he could be the world's earliest known dog.

"It's normally relatively easy to tell the difference between the two," geneticist David Stanton of the Centre for Palaeogenetics in Sweden told CNN.

"We have a lot of data from it already, and with that amount of data, you'd expect to tell if it was one or the other. The fact that we can't might suggest that it's from a population that was ancestral to both - to dogs and wolves."

Scientists have named the animal Dogor. That's the Yakutian word for "friend", but there's some fun English wordplay there too: Dog, or…?

The puppy remains in Russia, but scientists have taken a rib to Sweden to conduct further genetic testing. Finding out where Dogor sits in the canine evolutionary tree could reveal more information about when dogs and wolves diverged from a common ancestor, and when and how dogs were domesticated. 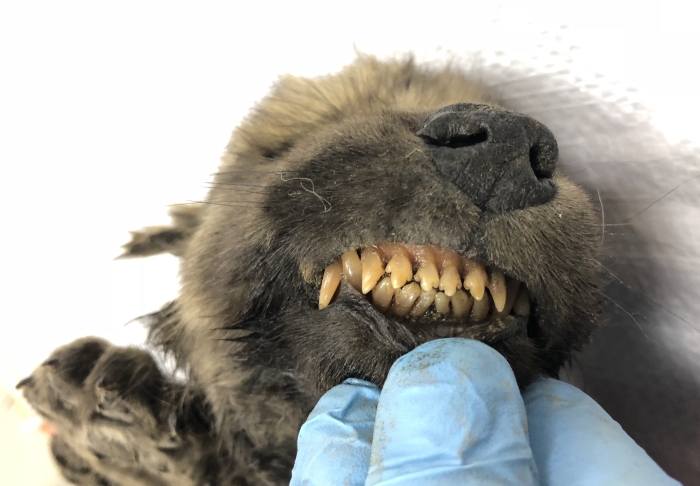 "We cannot separate it from a modern wolf, Pleistocene wolf or dog," evolutionary geneticist Love Dalén of the Centre for Palaeogenetics told Metro.

"One reason why it might be difficult to say is because this one is right there at the divergence time. So it could be a very early modern wolf or very early dog or a late Pleistocene wolf. If it turns out to be a dog I would say it is the earliest confirmed dog."

It's thought that two species diverged sometime between 15,000 and 40,000 years ago. We know, from a 15,000 year-old dog fossil found in Germany, that the species was around by this time, but older fossils proposed as Palaeolithic dogs dating back to 40,000 years ago remain debated.

As for domestication, when and how that happened also remains inconclusive. A 2017 study puts the timeline between 20,000 and 40,000 years ago, with domestication starting from a single population.

A 2016 study, on the other hand, puts the date sometime before 14,000 years ago, from two distinct populations, one in Asia and the other in Europe. As you can see, it's not an easy question to answer.

Dogor's rib, which will be undergoing aDNA analysis, may hold some clues.

"If you want to find the answer to that you need to look at ancient samples because the population they were domesticated from doesn't appear to be around anymore. It's specimens like this that could help clear that up but we don't have the results yet to speculate on that."

Trending News
Record-Breaking Signal From Distant Galaxy Is Furthest of Its Kind Ever Detected Space2 days ago
Procrastinating Could Be a Sign of Serious Health Problems, Study Finds Health4 days ago
Fluke Discovery of Ancient Farming Technique Could Stabilize Crop Yields Environment4 days ago