A Woman Kept Gaining Weight And Didn't Know Why. It Was a 50-Pound Ovarian Cyst

For months, Kayla Rahn had been struggling with abdominal pain, swelling and shortness of breath.

She had also been packing on pounds, gaining weight that seemed impossible to lose. People would ask whether she was pregnant - perhaps even with twins? - and when she was due. They would also volunteer to load groceries for her.

"I used to tell them I was going to name it Taco Bell," the 30-year-old told The Washington Post about the jokes she used to make in response to all the awkward pregnancy questions.

It wasn't until recently that Rahn learned what was really happening: A cyst the size of a watermelon was growing inside her ovary and squishing her other organs - a potentially dangerous situation, her physicians said.

Rahn underwent surgery in late May to remove her ovary and the 50-pound (22 kilogram) cyst - the biggest one her surgeon said he had ever extracted.

Officials at Jackson Hospital in Montgomery, Alabama, announced the surgery in a news release this week and said Rahn had a mucinous cystadenoma, a benign cystic tumor in the ovary.

Since it was removed, Rahn said, she has lost 75 pounds (34 kilograms) - and her surgeon said they are "excited things went well for her". 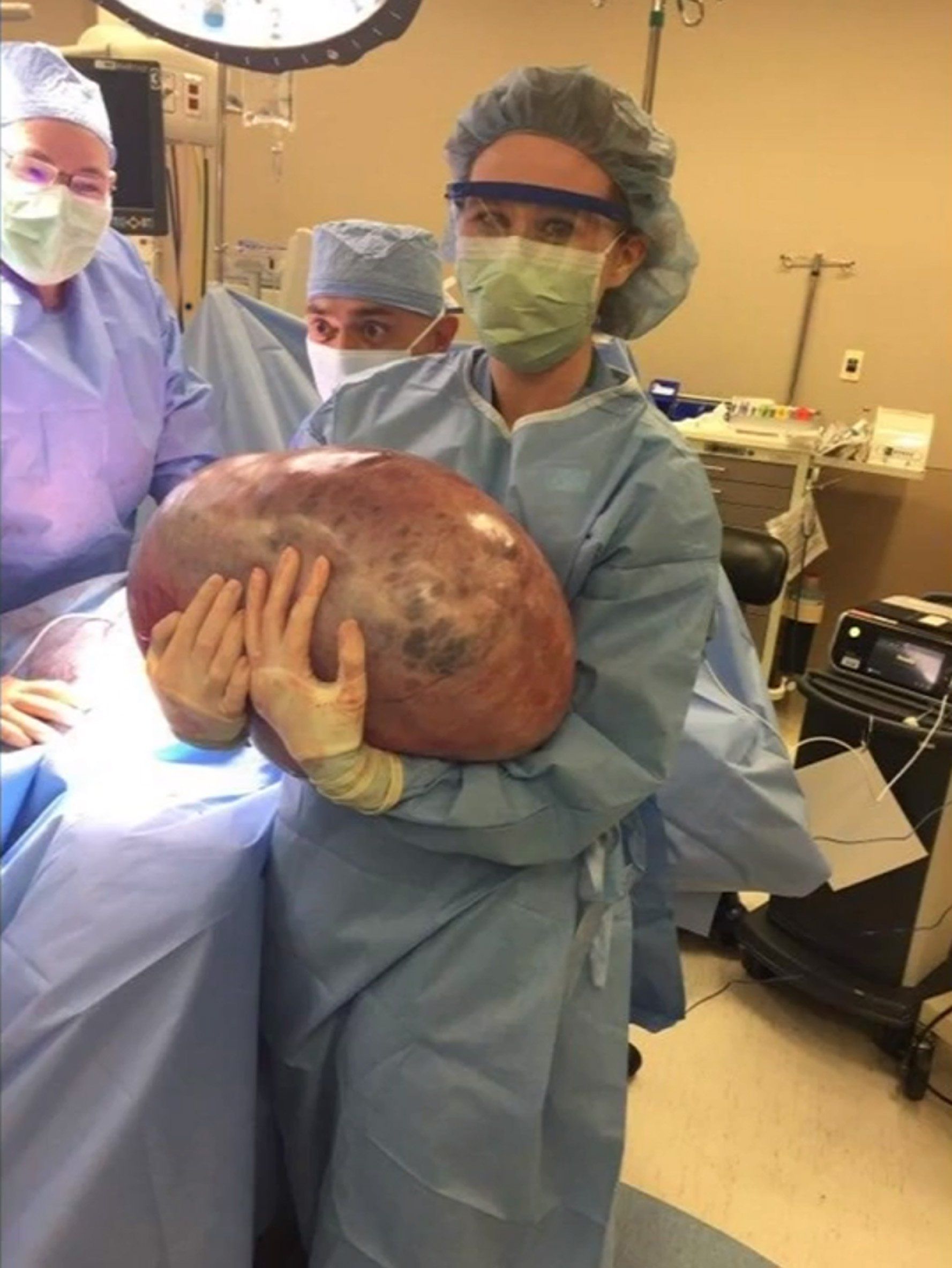 "It wasn't a fun surgery, and there were moments I was in pain," Rahn said Friday. "But I had such an awesome support system, I didn't have a chance to be worried about anything."

Following months of health problems and no solutions, Rahn said, her mother took her to the emergency room at Jackson Hospital, not far from where she lives.

There, Rahn said, physicians discovered an enormous mass in her abdomen, later telling her it was in one of her ovaries - and that they needed to get it out right away.

Rahn said she was relieved to finally have answers.

"I remember crying every time we talked about it," she said.

When the doctors told her what they had found, Rahn didn't seem that surprised, said Gregory Jones, an obstetrician-gynecologist at the hospital.

"She knew something was wrong," said Jones, one of Rahn's surgeons. "What was interesting is that she never had the shock and awe; she had this relief, like, 'Of course there's a mass.' "

Rahn - mostly reassured but still concerned - was wheeled into an operating room at the hospital the next day, May 26, she said.

Her surgeons confirmed it was an ovarian cyst and removed it.

Rahn was kept in the intensive care unit for a couple of days as her organs, which had been crammed inside her abdomen, started to move back into place, Jones said.

The surgeon explained that once the body has been decompressed, some patients can experience changes in blood pressure or electrolyte or renal problems. But Rahn, he said, did "extremely well".

Ovarian cysts are common and usually harmless. Many women never even know they have them because the cysts come and go without causing problems, according to the Mayo Clinic.

However, in cases in which the cysts do not dissolve on their own, they can cause pain and bloating and, when not treated, can force the ovary to twist or can rupture, causing internal bleeding, according to the Mayo Clinic.

It's unclear how long Rahn had the cyst, but her surgeon estimated it was more than a year.

Kayla Rahn (l) before her surgery; and with her boyfriend, Jonathan Pittman, several weeks after the operation. (Kayla Rahn)

Rahn has an incision stretching from her chest to her pelvis but said she is otherwise on the mend - and regaining self-confidence, wearing clothes she hadn't been able to fit into for some time.

Now, she said, she has a message for others: Listen to your body, and advocate for yourself. It's important, she said, for people to press for answers concerning their medical problems.

"She was seeking help from multiple physicians, and we had missed it - as a medical community, we had missed it," Jones said, emphasizing the need for patients to seek help and for their doctors to listen to them.