Life down here on Earth goes along like it always does, with all its messy, petty, awful squabbles, with rent and bills and chores and work - but up there in space, wonderful things are being seen and discovered all the time.

Obviously there will be exciting occurrences we can't predict in the year ahead (hello colliding neutron stars), but to the best of our knowledge, here are seven of the most exciting things to keep your eyes on the sky for in 2018.

That's pretty much everyone, so mark the date of your eclipse in the calendar and get ready.

Every year, there are a number of meteor showers, and if you get out there with a camera, you can grab some spectacular photos.

If you want to try to see as many meteor showers as possible, you can find a very comprehensive calendar here, and a more simple calendar here. 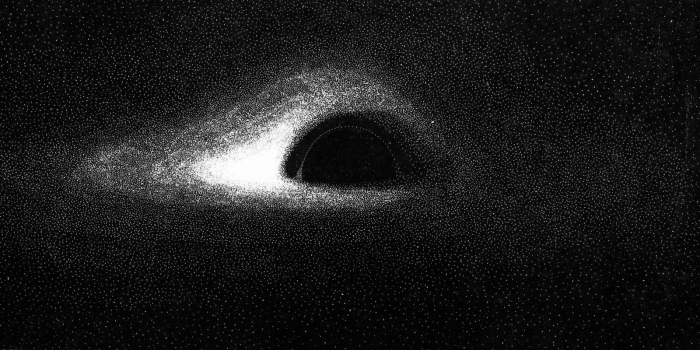 The first image of a black hole, created in 1979. (Jean-Pierre Luminet)

3. We may finally see a black hole's event horizon

In April this year, a multi-telescope project called the Event Horizon Telescope made a no-holds-barred attempt to photograph the event horizon of a black hole - not the black hole itself, but the point of no return, where the pull of the object is so strong that nothing, not even light, can escape.

We're still waiting to see what they photographed over five nights of observation time of Sagittarius A*, the black hole at the centre of our galaxy, and hopefully that image will drop sometime in early 2018. We're so excited, for real.

Friends, it is (maybe not quite) official: Earthlings are going back to the Moon. The last person to set foot on its surface was NASA astronaut Eugene Cernan in 1972, and next year, well, we may not get back there personally, but there's a whole bunch of nifty Moon stuff percolating.

For starters, India is putting a rover on the Moon for the first time in the country's history in 2018, and that's rad.

SpaceX also said it's planning a trip to lunar orbit - with two private citizens on board (although it's been pretty quiet about it for a while). China's Chang'e 4 and Chang'e 5 are going to be conducting a dark side exploration and sample return mission respectively.

There have also been rumblings of the US sending humans back to the Moon, and don't forget Google's Lunar XPrize - a competition for private entities to put a robotic rover on the Moon.

Were you excited about Rosetta and Philae and their rendezvous with and subsequent research on Comet 67P/Churyumov-Gerasimenko? Well, boy, you're going to love 2018! We have not one, but two asteroid landers due to meet their targets this year.

In June, JAXA's Hayabusa 2, which launched in 2014, is going to meet up with asteroid Ryugu, a near-Earth asteroid with a rare combination of both C-type and G-type qualities.

And in August, NASA's OSIRIS-REx is going to meet up with near-Earth asteroid Bennu.

It's no doubt going to be fascinating to watch, but there's also going to be years of science - both of these missions are returning a sample to Earth, Hayabusa in 2020 and OSIRIS-REx in 2023. Amazing!

Sometime early next year - it's hard to say exactly when - a pulsar is going to fly really, really closely past one of the brightest stars in our galaxy, through the disc of gas and dust surrounding an extremely luminous blue star 15 times the mass of the sun and 10,000 times brighter.

When that happens, there's going to be an explosion of astrophysical fireworks that will help researchers measure the mass, gravity, magnetic field, stellar wind and disc properties.

7. There's going to be a Mercury probe

This year we saw the end of Cassini's mission. Juno is out there studying Jupiter, but we definitely need more planetary probes. Luckily we're going to get 'em.

In 2018, the ESA and JAXA are launching their joint mission - BepiColombo, which is going to probe Mercury, our Solar System's closest planet to the Sun.