Evidence of the world's oldest known winemaking has been uncovered in the nation of Georgia, with a chemical analysis of Stone Age pottery jars fingerprinting an ancient drop going back some 8,000 years.

They say wine improves with age, and if that's true, the discovery is truly sublime – and pushes back the world's earliest evidence of modern-style viticulture by up to 1,000 years, trumping earlier finds in the Zagros Mountains of Iran dating to around 5400–5000 BCE.

The discovery, made by researchers from the University of Toronto in Canada and the Georgian National Museum, is also a fitting one.

Georgia, which has a long heritage of winemaking, is positioned at a crossroads between Western Asia and Eastern Europe, and the grape identified in jar fragments excavated from two Neolithic-era villages is Vitis vinifera – aka the 'Eurasian grapevine', from which nearly all kinds of modern wine originate. 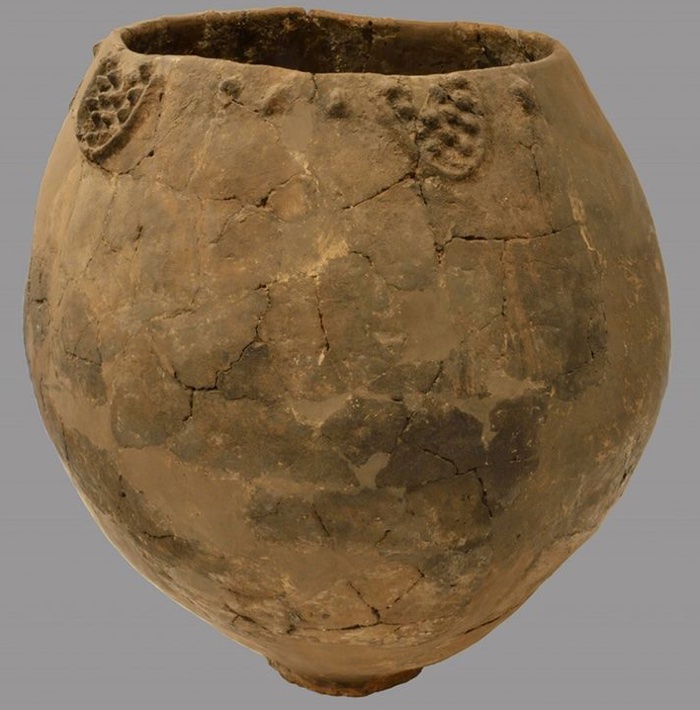 "The infinite range of flavours and aromas of today's 8,000–10,000 grape varieties are the end result of the domesticated Eurasian grapevine being transplanted and crossed with wild grapevines elsewhere over and over again," says archaeologist Stephen Batiuk from the University of Toronto.

"The Eurasian grapevine that now accounts for 99.9 percent of wine made in the world today, has its roots in Caucasia."

The ceramic shards were uncovered in digs conducted in the ancient villages of Gadachrili Gora and Shulaveris Gora, with the team later confirming the presence of a number of acids found in wine taken from the residue of eight jars: tartaric, malic, succinic, and citric acid.

The researchers say this chemical evidence is a snapshot of early human civilisation toward the end of the Stone Age, as it encountered new environments and made the best use of whatever resources found there – which in this case included cultivating the beginnings of all modern wine.

"In essence, what we are examining is how the Neolithic package of agricultural activity, tool-making and crafts that developed further south in modern Iraq, Syria, and Turkey adapted as it was introduced into different regions with different climate and plant life," Batiuk says.

"The horticultural potential of the south Caucasus was bound to lead to the domestication of many new and different species, and innovative 'secondary' products were bound to emerge." As innovative as this early viticulture was, though, it wasn't the first time ancient humans mashed grapes into a fermented liquid and decided to drink it.

That honour belongs to the long-ago people of Jiahu in the Yellow Valley of China, where researchers previously found evidence of an even earlier kind of wine production dating back to around 7000 BCE.

But this heady drop wasn't the wine we know and love today, and incorporated hawthorn fruit, rice, and honey mead, in addition to grapes. That means the latest Georgian discovery still takes out the title of the oldest pure wine.

It's thought the prehistoric imbibers of Georgia may have stored their wine in large jars underground, leaving them to ferment.

Some of these jars were pretty big – a comparable jar uncovered in a nearby site holds 300 litres (79 gallons), which could have held the contents of 400 wine bottles today.

It's amazing to think that 8,000 years ago the world's earliest winemakers were producing something very similar to the wine we consume today – and what's even more startling is it hints we probably had lots more in common with these ancient ancestors too.

"It shows that human beings back then were about more than utilitarian activity. There's far greater sophistication even in the transitional Neolithic than we had any clue about."

Trending News
Man Keeps Rock For Years, Hoping It's Gold. It Turns Out to Be Far More Valuable Space3 days ago
The FDA Just Approved The Most Expensive Drug in The World Health3 days ago
Rapidly Melting Glaciers Are Releasing a Staggering Payload of Unknown Bacteria Environment5 days ago