Football fans in the US can be divided into three camps – those who think the Patriots victory against the Colts in the 2014/15 playoffs were given a helping hand by slightly under inflated footballs, those who don't, and those who ask 'OMG can't we just get on with football?!'

Over the past few years, it seem like everybody has weighed in on the 'Deflategate' controversy. Even science celebrity Bill Nye has aired his views. Now 10-year-old Ace Davis from Millcreek Elementary in Kentucky has weighed in as well, and his words are literally prize winning.

Davis won a local science fair by testing the hypothesis "under-inflated footballs provide a competitive advantage in a game."

And just what was his inspiration? According to an interview with the budding sports scientist, vengeance played a part.

"Because I hate Tom Brady, he's been accused of cheating before, I want him to be caught," Davis told NFL Draft Diamonds' reporter Damond Talbot.

If you're one of the billions of people on this planet who have no idea what Deflategate is, or why Tom Brady might have earned the wrath of a young football fan, here's a quick recap.

On 18 January 2015, the New England Patriots played against the Indianapolis Colts in the annual American Football Conference Championship Game.

During the first half, Colts linebacker D'Qwell Jackson received a pass from the Patriot's star quarterback, Tom Brady. This ball was eventually put into the hands of NFL officials, who suspected something fishy.

Official NFL rules require game balls to be inflated to a pressure of between 12.5 and 13.5 pounds per square inch. This ball – among others – was found to be a couple of pounds too squishy.

A ball with more 'give' should – technically – be a little easier to throw and catch, improving accuracy. So a slightly under-inflated regulation football might have given an offensive position some kind of advantage.

Since 2006, whoever is in offense provides the ball in play. So Brady was accused of at least knowing about the ball's dubious integrity, and the quarterback was suspended; a ruling that was then overturned. And upheld again.

Clearly Ace Davis had his own strong opinion on the matter, and decided to use that as fodder for a science fair project.

To get to the bottom of whether this softer football gave the Patriots an advantage, Davis employed his sister and his mother to throw three footballs inflated to different pressures. His proud father posted Ace's achievements on social media, as seen below (full Facebook post here). 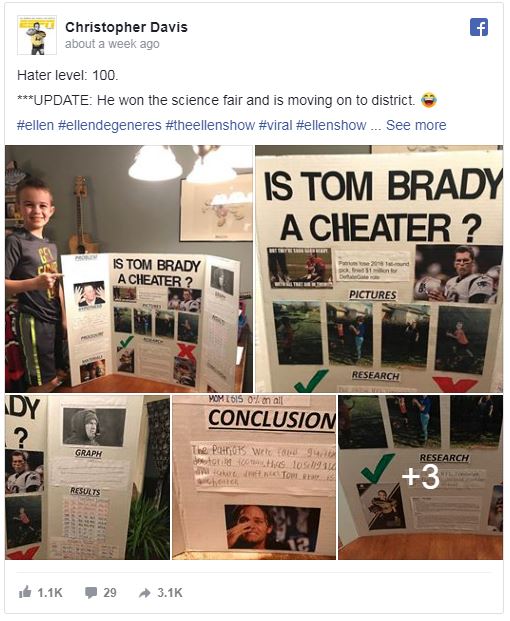 Balls were thrown, distances measured, averages recorded, accuracies evaluated, a graph was drawn in pencil, and a conclusion was reached.

Look, nobody here at ScienceAlert is qualified to weigh in on sportsballs controversies. But we do like our science, and while we're pretty sure Ace Davis's study wouldn't pass peer review for journals like Nature, it's clear he's put some good thought into his experiment.

Maybe next year he could investigate cricket balls instead? Just a thought.