Berna Gomez, wearing glasses to test the prosthesis. (John A. Moran Eye Center at the University of Utah)

A 'visual prosthesis' implanted directly into the brain has allowed a blind woman to perceive two-dimensional shapes and letters for the first time in 16 years.

The US researchers behind this phenomenal advance in optical prostheses have recently published the results of their experiments, presenting findings that could help revolutionize the way we help those without sight see again.

In just a few days, the faces of Gomez' two children and her husband had faded into darkness, and her career as a science teacher had come to an unexpected end.

Then, in 2018, at age 57, Gomez made a brave decision. She volunteered to be the very first person to have a tiny electrode with a hundred microneedles implanted into the visual region of her brain. The prototype would be no larger than a penny, roughly 4 mm by 4 mm, and it would be taken out again after six months.

Unlike retinal implants, which are being explored as means of artificially using light to stimulate the nerves leaving the retina, this particular device, known as the Moran|Cortivis Prosthesis, bypasses the eye and optic nerve completely and goes straight to the source of visual perception.

After undergoing neurosurgery to implant the device in Spain, Gomez spent the next six months going into the lab every day for four hours to undergo tests and training with the new prosthesis.

The first two months were largely spent getting Gomez to differentiate between the spontaneous pinpricks of light she still occasionally sees in her mind, and the spots of light that were induced by direct stimulation of her prosthesis.

Once she could do this, researchers could start presenting her with actual visual challenges.

When an electrode in her prosthesis was stimulated, Gomez reported 'seeing' a prick of light, known as a phosphene. Depending on the strength of the stimulation, the spot of light could be brighter or more faded, a white color or more of a sepia tone.

When more than two electrodes were simultaneously stimulated, Gomez found it easier to perceive the spots of light. Some stimulation patterns looked like closely spaced dots, while others were more like horizontal lines.

"I can see something!" Gomez exclaimed upon glimpsing a white line in her brain in 2018.

Vertical lines were the hardest for researchers to induce, but by the end of training Gomez was able to correctly discriminate between horizontal and vertical patterns with an accuracy of 100 percent. 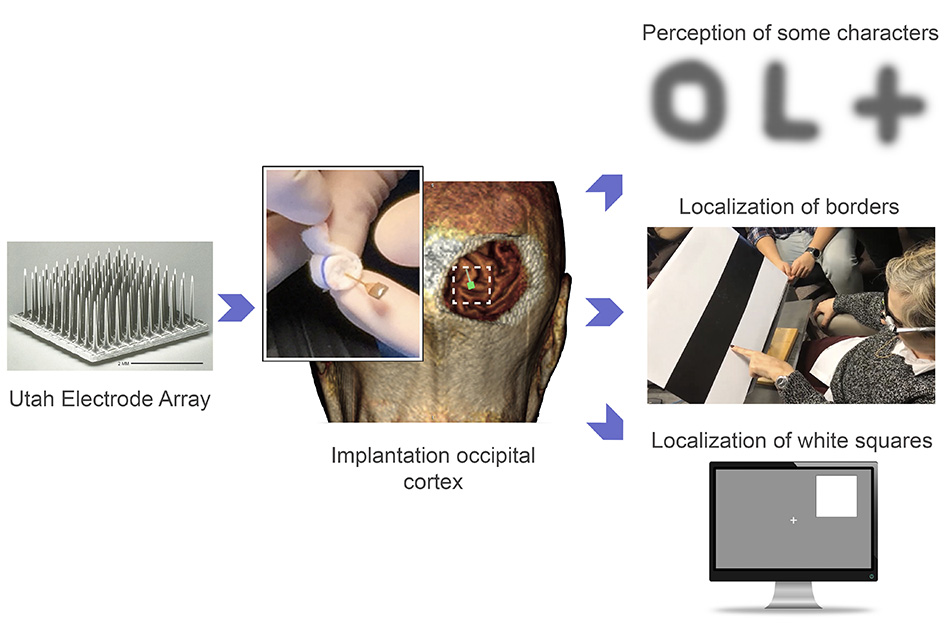 The Utah Electrode Array in action. (John A. Moran Eye Center at the University of Utah)

"Furthermore, the subject reported that the percepts had more elongated shapes when we increased the distance between the stimulating electrodes," the authors write in their paper.

"This suggests that the phosphene's size and appearance is not only a function of the number of electrodes being stimulated, but also of their spatial distribution… "

Given these promising results, the very last month of the experiment was used to investigate whether Gomez could 'see' letters with her prosthesis.

When up to 16 electrodes were simultaneously stimulated in different patterns, Gomez could reliably identify some letters like I, L, C, V and O. She could even differentiate between an uppercase O and a lowercase o.

The patterns of stimulation needed for the rest of the alphabet are still unknown, but the findings suggest the way we stimulate neurons with electrodes in the brain can create two-dimensional images.

The last part of the experiment involved Gomez wearing special glasses that were embedded with a miniature video camera. This camera scanned objects in front of her and then stimulated different combinations of electrodes in her brain via the prosthesis, thereby creating simple visual images.

The glasses ultimately allowed Gomez to discriminate between the contrasting borders of black and white bars on cardboard. She could even find the location of a large white square on either the left or right half of a computer screen. The more Gomez practiced, the faster she got.

The results are encouraging, but they only exist for a single subject over the course of six months. Before this prototype becomes available for clinical use it will need to be tested among many more patients for much longer periods of time.

Other studies have implanted the same microelectrode arrays, known as Utah Electrode Arrays, into other parts of the brain to help control artificial limbs, so we know they're safe in at least the short term. But it's still early days for the tech, which risks a steady drop in functionality over just a few months of operation.

While engineers beef up the reliability of the devices, we still need to know exactly how to program the software that interprets the visual input.

Last year, researchers at Baylor College of Medicine in Houston inserted a similar device into a deeper part of the visual cortex. Among five study participants, three of whom were sighted and two of whom were blind, the team found the device helped blind people trace the shapes of simple letters like W, S, and Z.

In Gomez's case, there was no evidence of the device triggering neural death, epileptic seizures, or other negative side effects, which is a good sign, and suggests microstimulation can be safely used to restore functional vision, even among those who have suffered irreversible damage to their retinas or optic nerves.

"One goal of this research is to give a blind person more mobility," says bioengineer Richard Normann from the University of Utah.

"It could allow them to identify a person, doorways, or cars easily. It could increase independence and safety. That's what we're working toward."

Right now, it seems only a very rudimentary form of sight can be returned with visual prostheses, but the more we study the brain and these devices among blind and sighted people, the better we will get at figuring out how certain patterns of stimulation can reproduce more complex visual images.

Perhaps one day, other patients in the future will be able to trace the whole alphabet with this prosthesis because of what Gomez has done. Four more patients are already lined up to try out the device.

"I know I am blind, that I will always be blind," Gomez said in a statement a few years ago.

"But I felt like I could do something to help people in the future. I still feel that way."

Gomez's name is listed as co-author on the paper for all her insight and hard work.

The study was published in the Journal of Clinical Investigation.