Once, about 300 million years ago, when southern Africa was joined at South America's hip, this now arid region was covered in a wide expanse of glaciers.

You wouldn't know it today, looking out over the dry volcanic desert of the Twyfelfontein area in northern Namibia. But throughout its 4.5 billion year history, our planet has made a habit of reinventing itself.

If we peel back the layers, sometimes we can catch a glimpse of who it used to be - all it takes is for someone to try.

Geologists Graham Andrews and Sarah Brown are some of the first to do so in Namibia, and their latest research has led to an unexpected discovery.

It turns out, this region was once home to a major ice stream - the arteries that direct flow from a glacier's centre to its edge - and this one was so impressive, it would have rivalled those we now see in modern Antarctica.

While exploring the desert country on a field trip, these two geologists from West Virginia University noticed some peculiar features in the region's sprinkling of long, steep hills, commonly known as the Namibia drumlins.

"We quickly realised what we were looking at because we both grew up in areas of the world that had been under glaciers, me in Northern Ireland and Sarah in northern Illinois," says Andrews, whose expertise is based on the volcanic provinces throughout the North American Cordillera.

But even though the origins of this foreign landscape seemed clear to Andrews, he was surprised to find that the topic had never been researched.

"People obviously knew that part of the world had been covered in ice at one time, but no one had ever mentioned anything about how the drumlins formed or that they were even there at all," explains Andrews.

Analysing the shape and size of the unique landscape using information from Google Earth, Andrews and his team tried to figure out whether the drumlins could have been carved from the waxing and waning of a now obsolescent glacier.

Going through their results, the researchers found big, long grooves in the region's rocks. The evidence was clear: this must have been caused by ancient ice forms that moved very quickly - fast enough that the ice could dig its way into the volcanic landscape (around 800 metres per year).

The findings represent the very first evidence of a massive ice stream, responsible for draining the ice cap that covered southern Africa during the late Paleozoic Age.

Twisting and turning for an estimated two hundred kilometres, this stream would have flowed in a northwesterly direction, emptying the region's ice cap into a shallow marine environment in what is now modern day Brazil. 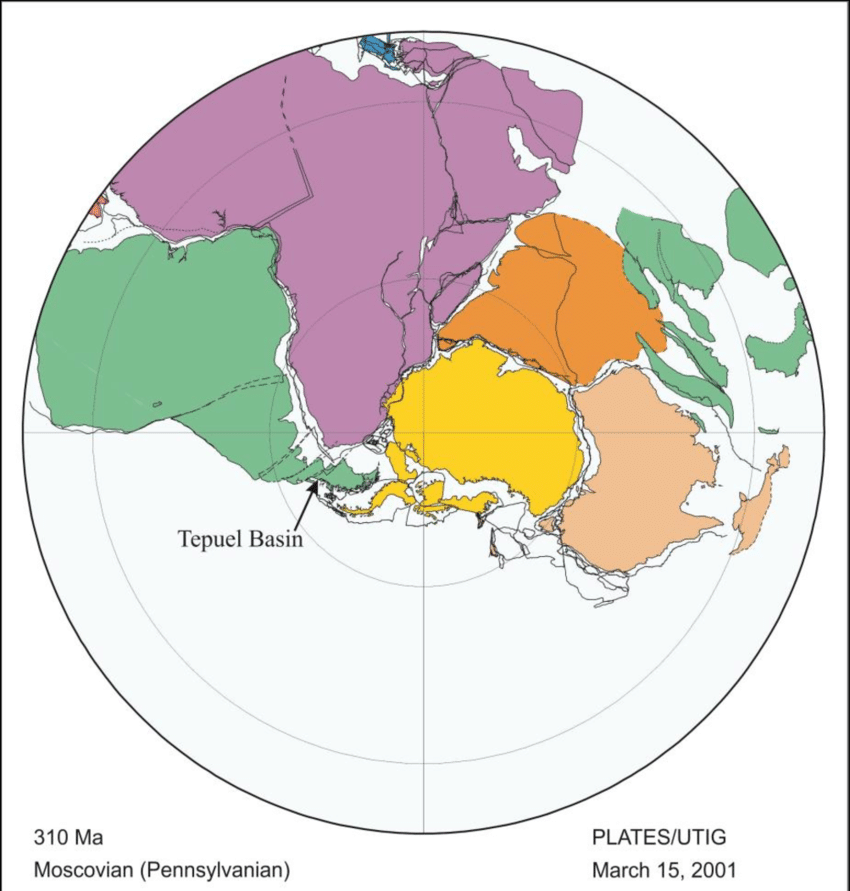 Not only does the research confirm yet another tie between these two southern continents, it also affirms the location of southern Africa 300 million years ago, spooned by South America just over the South Pole.

"This work is very important because not much has been published on these glacial features in Namibia," says co-author Andy McGrady, another geologist from West Virginia University.

"It's interesting to think that this was pioneer work in a sense, that this is one of the first papers to cover the characteristics of these features and gives some insight into how they were formed."

This study has been published in PLOS One.