A hillside in southern Scotland has been transformed from an abandoned industrial site into a Universe-themed public park, complete with models of black holes, the Milky Way galaxy, and comet's tails that you can walk through.

The Crawick Multiverse is 80 km south of Glasgow in the countryside of Dumfries and Galloway. Set over 55 acres, the park is a modern take on Neolithic monuments such as Stonehenge, which paid tribute to the movements of the Solar System - but this time the focus is on the latest advances in physics, such as chaos theory and the idea of parallel universes.

"One theory of pre-history is that stone circles frame the far hills and key points, and while I wanted to capture today's cosmology, not yesterday's, I was aware of this long landscape tradition," landscape architect Charles Jencks, who created the park, told BBC Earth.

Jencks was given the land by the Duke of Buccleuch and Queensberry after the coal mine shut down, because they didn't know what else to do with the muddy hillside. It had ridges cut into it and nothing seemed to grow there.

As excavation started, it revealed thousands of half-buried boulders that Jencks decided to turn into huge, science-inspired statues.

Two of the biggest models are of the Milky Way and Andromeda galaxies, which people can walk through in an attempt to graps the scale of them.

There's also a mound where mudstone slabs trace a spiral path up to the top that represents the multiverse. Along the way, some of the slabs are carved out to symbolise other potential universes where different physical laws apply.

The idea that there are other universes out there is something that's been suggested by several leading physical models, including string theory and the 'eternal inflation' model, which suggests that the Universe is expanding constantly in different places.

According to eternal inflation, infinite multiverses are possible wherever this expansion occurs - think of it like tiny fractal universes expanding from our own, and each of those universes has their own expanding universes at their edge.

String theory, on the other hand, proposes that inside the smallest subatomic particles we know of, quarks, there are tiny vibrating 'strings' that determine the physical laws that govern our Universe. But to explain string theory, there must be at least 10 dimensions tucked away in space somewhere, and that means that multiverses could also be hidden in the fabric of space-time.

According to Jencks, he hoped that the park would, "Confront the basic question which so many cosmologists raise: why is our Universe so well-balanced, and in so many ways? What does [this] apparent fine-tuning mean? How can we express it, make it comprehensible, palpable?"

Jencks' next landscaping project will be at CERN in Switzerland, the home of the Large Hadron Collider (LHC). Fittingly, the LHC is also our best chance of figuring out if multiverses exist.

It's not the first time science and mathematics have been turned into grand artworks, but we can't help but love the commitment to turn public space into something that can inspire the public with the wonders of physics.

You can see some of the Crawick Multiverse artworks below.

The Sun auditorium, which represents the Sun and can hold 5,000 people: An artwork showing a black hole warping the fabric of space-time situated Garden of Cosmic Speculation, which surrounds Jencks' nearby house. 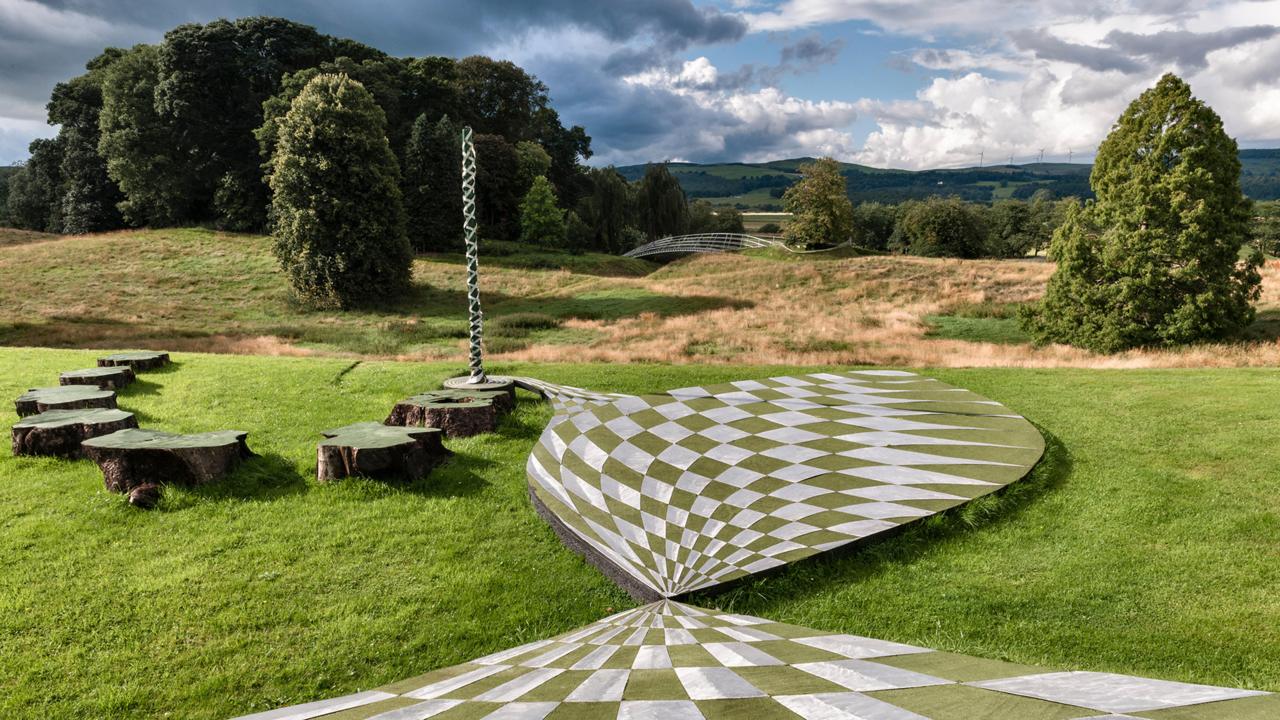 The multiverse structure, with each slab representing an alternate universe.