Environment03 May 2017
By Peter Dockrill

The impending separation of what's expected to be one of the largest icebergs ever recorded just got a dramatic step closer, after an epic 180-km-long (111.8-mile) rift in Antarctica suddenly split in two.

Scientists have been watching this massive crack in the Larsen C ice shelf develop slowly for decades, but a series of rapid developments in the past year has now seen the rift divide into two separate paths, with a new secondary branch advancing 15 km (9.3 miles) in a matter of days.

"While the previous rift tip has not advanced, a new branch of the rift has been initiated," says glaciologist Adrian Luckman from Swansea University in the UK.

"This is approximately 10 km (6.2 miles) behind the previous tip, heading towards the ice-front." 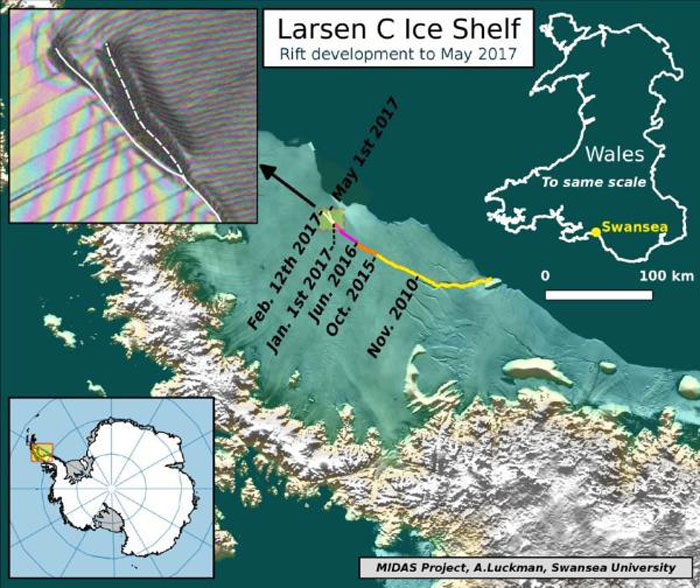 If – or, more likely, when – that happens, it would amount to the third largest loss of Antarctic ice in recorded history.

For context, depending on your local geography, that's an iceberg about the size of Delaware – or roughly one-quarter the size of Wales.

"This is the first significant change to the rift since February of this year," says Luckman.

"Although the rift length has been static for several months, it has been steadily widening, at rates in excess of a metre (3.3 feet) per day."

While the main branch appears to have slowed down recently, in January it cleaved through 10 km (6.2 miles) in just three weeks, building on dramatic gains of 18 km (11 miles) already made in December. 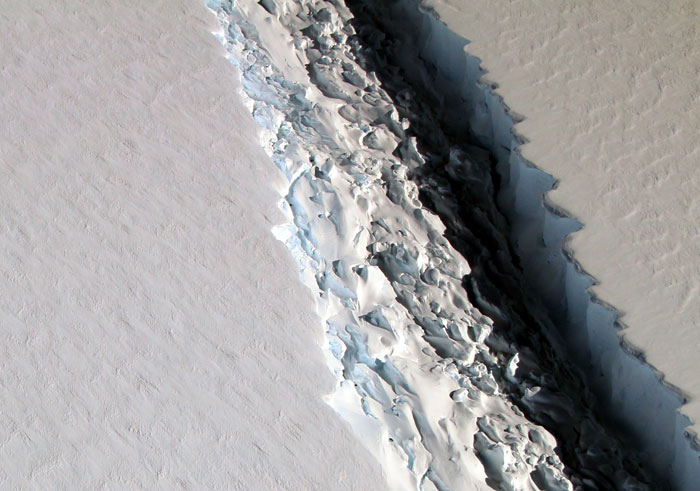 "You look at these rifts and think they're moving really quite slowly," Luckman told Jonathan Amos at BBC News.

"But when they go, they must go very quickly. People have said they could travel at anything up to the speed of sound. It would be amazing to be on the shelf to hear it."

Although the crack has developed by approximately 60 km (37.3 miles) in the last year, the researchers think it has now entered a slushy, wetter region of ice called a suture zone.

This softer portion of the ice shelf is thought to have slowed the rift's progress – but at the same time, it's also likely to have contributed to the crack having divided into two separate paths.

"[B]ecause the rift tip was in this area of basically softer ice that is very difficult to fracture, then the stresses have been transferred elsewhere and something has given," Luckman explains.

"[I]t has fractured in some of the ice that is more vulnerable to breaking which happens to be about 10 km further back than the current rift tip."

While it's unclear just what this sudden forking means for the development of the rift and the ice shelf as a whole – those studying the crack think it's just a matter of time before the phenomenon calves the iceberg from the rest of the shelf. 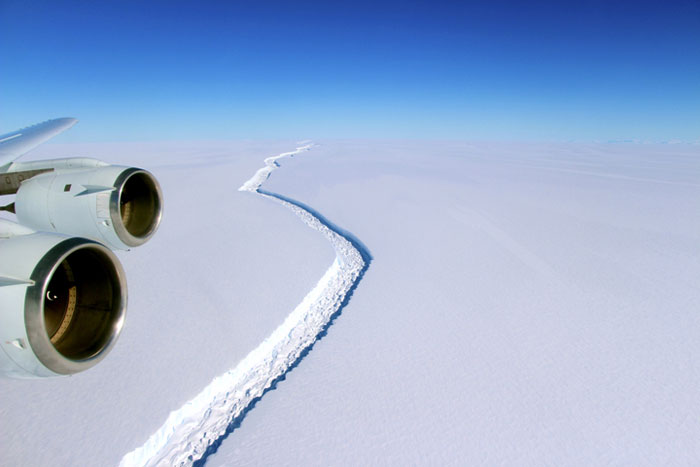 When that happens, Luckman – who previously predicted that a calving event was only months away – says the effects on the rest of the Larsen C ice shelf could be dramatic.

Ultimately, the loss of such a large portion of the ice shelf would weaken the stability of the remaining shelf, which could eventually lead to the whole of Larsen C collapsing – as happened to Larsen A and B.

"When it calves, the Larsen C ice shelf will lose more than 10 percent of its area to leave the ice front at its most retreated position ever recorded," Luckman explains in a press release.

"[T]his event will fundamentally change the landscape of the Antarctic Peninsula."