Google's about to switch on what's been called the highest capacity underwater fibre optic cable ever built, capable of delivering 60 Terabits per second (Tbps) of bandwidth across the Pacific.

The new cable connects the US west coast to the Mie and Chiba prefectures in Japan, and will effectively double the current capacity along the route. It's set to go live on 30 June, after months of testing.

The six-fibre pair cable – appropriately dubbed 'FASTER' – runs 9,000 kilometres, all the way from Oregon to the east coast of Japan, with hubs in Los Angeles, San Francisco, Portland, and Seattle. It also has the potential to connect the US with other major cities across Asia.

"From the very beginning of the project, we repeatedly said to each other, 'faster, Faster and FASTER', and at one point it became the project name, and today it becomes a reality," said Hiromitsu Todokoro, chairman of the FASTER management committee.

The project was first announced back in 2014, and was led by a collaboration of six companies - Google, Global Transit, China Telecom Global, Singtel, China Mobile International, and KDDI. Japanese IT giant NEC Corporation was tasked with building the cable itself.

The hope is that the new fibre optic cable will help service providers in Asia and the US meet the increase in broadband traffic between the two continents in the future, which is expected to increase four-fold.

"The cable system ... will help spur innovation on both sides of the Pacific to simulate the growth of the digital economy," said Ooi Seng Keat, vice president of Singtel.

You can see all existing submarine cables in this interactive map, and the new cable below: 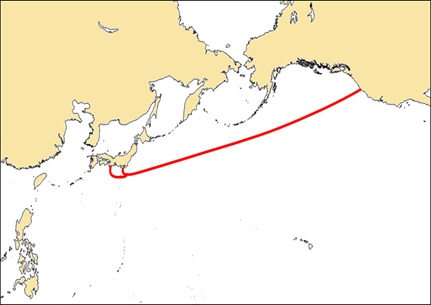 Out of the cable's total 60 Tbps bandwidth, Google will have access to 10 Tbps, which they've announced they'll use to improve support to Google customers.

"This is especially exciting, as we prepare to launch a new Google Cloud Platform East Asia region in Tokyo later this year," Google's Alan Chin-Lun Cheung wrote in a blog post. "Dedicated bandwidth to this region results in faster data transfers and reduced latency as GCP customers deliver their applications and information to customers around the globe."

This isn't Google's first submarine cable - the company has invested in two other undersea cables to connect the US to South America, Japan, and other parts of Asia.

And they're not the only ones hoping to increase bandwidth - last month, Facebook and Microsoft announced they were partnering to build a submarine cable across the Atlantic.

The race is also on to develop technology that'll connect the entire world to the internet, not just the major fibre hubs. Google is pushing forward with its Project Loon, which aims to deliver Wi-Fi to remote areas using hot air balloons. Facebook, on the other hand, is building a fleet of solar-powered drones to beam down internet.

When it comes to connecting the world, a little healthy competition isn't a bad thing, and we can't wait to start seeing the benefits of all these projects.

Now, if someone could get those on-land fibre optic cables sorted, and maybe stop the sharks from eating our underwater cables, we'd be eternally grateful.