Chinese Man Chops Off Own Finger After Snake Bite, Doctors Say It Was Unnecessary

When bitten on the finger by a venomous snake, a farmer in China took the only recourse he thought available to him: he lopped the digit right off before undertaking a journey to the nearest city with a hospital.

But, according to the doctors who treated the patient once he arrived, he needn't have bothered with the chop.

As reported by the South China Morning Post, the snake was a pit viper locally known in the Shangyu district of Zhejiang province as the "five-step snake." Local myth has it that, once the snake bites, you can walk just five steps before collapsing from the effects of the venom.

So, to prevent the venom from spreading, the 60-year-old man acted swiftly, self-amputating the site of the snake bite. He then wrapped the wound in cloth and made the 80-kilometre (50-mile) trip to a hospital in Hangzhou to receive treatment.

Doctors at Hangzhou Hospital of Traditional Chinese Medicine reportedly told media that the patient, identified only as Zhang, seemed fine - he didn't show any symptoms such as breathing problems, headache or bleeding from the gums that would be expected from a bad snake bite.

Nevertheless, his brave self-amputation was… well, a little bit of overkill.

"It's not necessary at all [to cut it off]," doctor Yuan Chengda is reported as saying. "The five-step snake is not that toxic."

The so-called five-step snake may not be highly venomous, but that doesn't mean it's not dangerous. It's a type of pit viper called Deinagkistrodon acutus, primarily found in northern Vietnam, southern China, Hainan, and Taiwan. 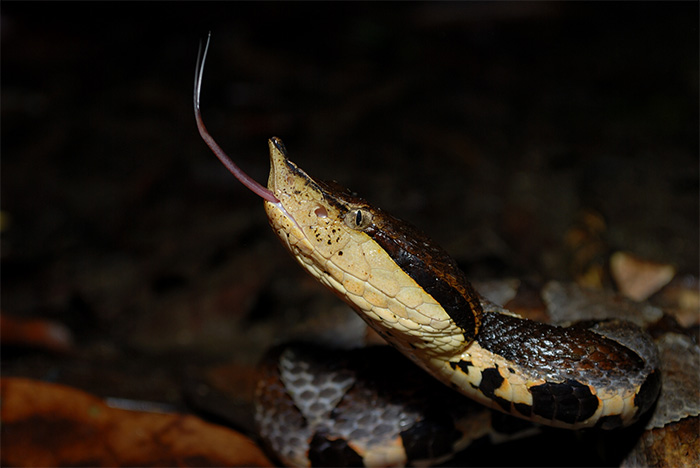 This snake's venom is a powerful haemotoxin that breaks down blood cells and causes bleeding. Larger individuals are known to be deadly to humans, so it's not unreasonable to fear a bite - and, in fact, Zhang told the doctors that one of his neighbours had died from a snakebite earlier this year.

Yuan also noted that Zhang's method of dealing with his injury is not uncommon. There is a lot of old and outdated information about how to treat snakebites, including cutting into the bite and sucking it to get the venom out (it doesn't work) or applying a tourniquet (also not helpful and potentially dangerous).

Around 30 percent of the hospital's snakebite patients have tried some radical method of treating themselves, and often ended up needing more medical care than if they hadn't.

"Some used knives to cut their fingers or toes, some used ropes or iron wires to bind the bitten limb tightly, and some even tried to destroy the poison in their body by burning their skin," Yuan said.

"When they arrive at the hospital, some people's limbs are already showing signs of gangrene."

According to advice from Queensland government in Australia (a state that's home to some of the world's deadliest snakes, but with a surprisingly low snakebite fatality rate), you need to wrap the wound tightly with a bandage or cling film, stay as still as you can, and get to a hospital straight away (call an ambulance if possible).

You should never cut or suck the wound, apply a tourniquet, or attempt to wash out the venom - venom can be harvested from the wound and used to identify the snake, allowing doctors to administer the appropriate antivenom as quickly as possible.

As for Zhang, he was administered antivenom and his wound was cleaned and dressed; he's reported that he is home and healing well. Unfortunately, his finger couldn't be reattached - he'd left it behind on the mountain.