The image is a bit fuzzy, but to scientists it's unmistakable: One of the largest icebergs ever recorded has broken free of Antarctica.

A crack in Antarctica's Larsen C ice shelf is responsible for the iceberg, which is roughly the area of Delaware state and the volume of Lake Michigan, according to researchers.

Researchers noticed the distinctive rift in Antarctica's ice in 2010, which has grown rapidly since 2016. The iceberg calved between July 10 and July 12, researchers said.

A NASA Earth-observing satellite called MODIS was among the first to photograph the colossal ice block free of Antarctica. Based on the image above, and another created by Adrian Luckman, also a glaciologist at Swansea University and a MIDAS Project member, it appears the iceberg has stayed intact. 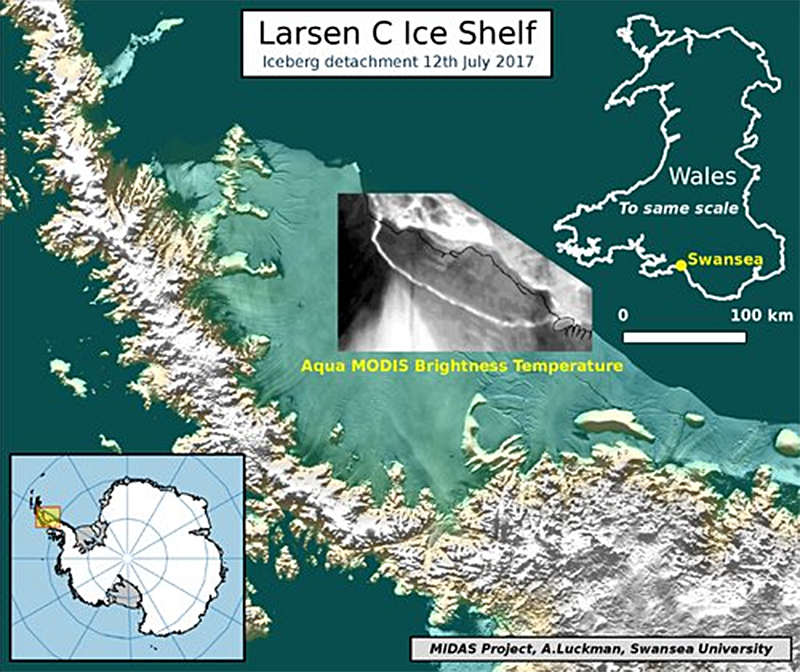 In the image above you can see a Map of Larsen C, overlaid with NASA MODIS thermal image from July 12 2017, showing the iceberg has calved.

This could make it the third-largest recorded since satellite measurements began, according to a July 6 tweet by The Antarctic Report.

In a July 12 blog post, Luckman and O'Leary said it is "one of the biggest ever recorded" at a weight of roughly 1 trillion metric tonnes, and said its name will likely be dubbed A68.

"The calving of this iceberg leaves the Larsen C Ice Shelf reduced in area by more than 12%, and the landscape of the Antarctic Peninsula changed forever," they said."

How big the new iceberg is, and where it's going

The ice block's area is roughly comparable to the US state of Delaware or the nation of Wales. But CryoSat - Europe's ice-monitoring satellite - recently took the most precise measurements to date of its thickness, allowing scientists to gauge its total volume.

Days before it broke free, Noel Gourmelen, a glaciologist at the University of Edinburgh, and his colleagues estimated the iceberg that is now drifting through the Southern Ocean would be about 620 feet (190 metres) thick and harbour some 277 cubic miles (1,155 cubic kilometres) of frozen water.

That's big enough to fill more than 460 million Olympic-size swimming pools with ice, or nearly all of Lake Michigan - one of the largest freshwater reservoirs in the world.

Gourmelen and the ESA on July 5 released this 3D animation that shows the iceberg's dimensions.

And here's Lake Michigan for a size comparison: Now that the iceberg has broken off of Antarctica "within days", scientists have previously said they aren't sure what will happen, since such large calvings are so rare.

"It could, in fact, even calve in pieces or break up shortly after. Whole or in pieces, ocean currents could drag it north, even as far as the Falkland Islands," Anna Hogg, a glaciologist at the University of Leeds, said in the ESA release.

Those islands lie more than 1,000 miles away from Larsen C in Antarctica.

This illustration of hundreds of icebergs' paths, from 1999 through 2010, shows how that drift might play out before it completely melts. An ice block thousands of years in the making

Antarctica's Larsen C ice shelf is one of the largest such shelves in the southern continent.

According to a tweet from Project MIDAS, "most of the ice that calves off fell as snow on the ice shelf in the past few hundred years, but there's an inner core that's a bit older." Project MIDAS announced in early June that satellite images showed the rift had split, turned north, and begun moving toward the Southern Ocean.

Luckman, who has closely monitors the ice shelf with his colleagues at Project MIDAS, previously released an animation of the rift's rapid growth (below).

It shows how the rift "jumped" as it sliced through bands of weak ice, and slowed when it met stronger, thicker ice. The ocean is shown in emerald green (top right), the Larsen C ice shelf is the light-blue patch, and the glacier behind it is depicted in white.

The final frame shows an image of the rift's tip breaking in multiple directions - a sign of imminent calving of the iceberg.

A close-up from the ESA's Copernicus satellite more clearly showed the chaos of the crack's tip on July 6: Are humans behind this?

The iceberg won't noticeably raise sea levels, since it was already floating in the ocean as part of Larsen C and displacing water. But Luckman and O'Leary previously said that once Larsen C loses its iceberg, the rest of the shelf "will be less stable than it was prior to the rift."

Put another way: There's a very slim chance that new iceberg could cause the entire Larsen C ice shelf, and an ancient glacier behind it, to slowly disintegrate and fall into the sea.

The chaos wouldn't be unprecedented. In 2002, a neighbouring ice shelf called Larsen B collapsed and broke up in the Southern Ocean. This animation captures that event unfolding from January 31 through April 13, 2002:

If and when Larsen C and its accompanying glacial ice eventually collapse, some scientists think sea levels may rise by up to 4 inches (10 cm).

However, experts on Antarctic ice say that such a loss is exceedingly unlikely and would mostly be due to natural processes.

"Large calving events such as this are normal processes of a healthy ice sheet, ones that have occurred for decades, centuries, millennia - on cycles that are much longer than a human or satellite lifetime," Helen Amanda Fricker, a glaciologist who studies Antarctic ice for the Scripps Institution of Oceanography, wrote in The Guardian last month.

"What looks like an enormous loss is just ordinary housekeeping for this part of Antarctica."

Buy Fricker warned that we shouldn't be complacent about climate change, which is mostly being driven by human activity.

"Antarctic ice shelves overall are seeing accelerated thinning, and the ice sheet is losing mass in key sectors of Antarctica," she said. "Continuing losses might soon lead to an irreversible decline."

More from Business Insider:
Trending News
Great White Sharks Are Being Scared From Their Habitat by Just 2 Predators Nature2 days ago
Monster Space Rock in Antarctica Is Among The Largest Found in 100 Years Space2 days ago
Couple Captures Rare Footage of a Giant Squid Swimming Off The Coast of Japan Nature2 days ago