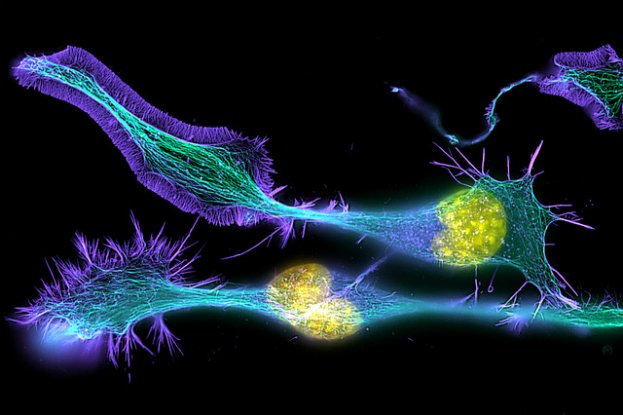 Medical scientists have developed a new chemical compound that’s been shown to treat spinal cord injuries of 80 percent of the animals it was tested on.

The compound, which they’re calling intracellular sigma peptide (ISP), was tested on 26 animals who were paralysed due to a spinal cord injury - and in 21 cases the animals were able to urinate, move, or both after seven weeks of treatment.

"This recovery is unprecedented," said neuroscientist Jerry Silver from Case Western Reserve University, who led the research, in a press release. "Each of the 21 animals got something back in terms of function. For any spinal cord-injured patient today, it would be considered extraordinary to regain even one of these functions, especially bladder function.

After a spinal cord injury, people become paralysed as a result of scar tissue that builds up and stops nerve cells from connecting with each other. Axons, the long part of the nerve cell that transmits messages from one cell body to another, try to cross the injury site, but molecules known as proteoglycans build up in the scar tissue and form an impenetrable net.

This means that nerves aren’t able to transmit electrical impulses properly anymore, and so normal bodily functions such as movement and bladder control are interrupted.

Currently there are no drugs available to help undo this damage.

The new peptide works by turning off the receptor in the nerve cells, called tyrosine phosphatase sigma, that interacts with the proteoglycans. In the video below, Silver explains that this is like stopping the nerve cell from sticking like velcro to the scar tissue, so that it can continue to grow.

In the lab, they found that ISP was capable of triggering axon growth, even when it was blocked with scar tissue.

"It was amazing. The axons kept growing and growing,” said Silver in a release.

And because the peptide is able to penetrate the scar-tissue-covered injury site, it simply needs to be injected into the blood stream, rather than directly into the spinal cord.

They then tested ISP on 26 rats who had severely injured spinal cords. The animals were given daily injections for seven weeks, while another group was injected with a placebo. During this time, they were assessed for their ability to walk, balance and control their bladder.

Over the seven weeks, 21 of the 26 rats who were treated with ISP regained at least one of the functions. Some regained all three abilities, while the animals given placebos saw no change. The results are published in Nature.

"Our treatment strategy was designed to be easily translatable," said Bradley Lang, a graduate student in Silver’s lab and lead author of the paper, in the release. "Our goal is to progress this treatment forward for use as a therapeutic following spinal cord injury."

But while the results are extremely exciting, the scientists still don’t know much about what causes some animals to respond better to the treatment than others.

"We don't know why a particular animal regained a specific function," said Silver in the release. "That is one of the big remaining questions."

They suspect it may have to do with the nerve tracts - the elongated nerve cells that connect different parts of the nervous system - that are left in the animals’ spinal cords after injury. The remaining tracts depended on the original injury, but the team found that rats that had nerve tracts that contained serotonergic fibres - fibres that release the neurotransmitter into the spinal cord - responded better to the ISPs.

Each animal tested in this study had different serotonergic sprouting patterns, which probably explains why they responded to the ISPs so differently.

"Sprouting is a critical phenomenon," Silver explained. "Even if there are just a few intact fibers left after the injury, it could be one critical piece that brings back an important function."

The researchers are now investigating the mechanisms that determine how well an animal will respond to the ISPs. They’re also looking into whether the peptides can help treat people with other scar-tissue-related conditions, such as multiple sclerosis.

But their main focus now is to help paralysed people to regain at least some mobility.

"Our goal is to progress this treatment forward for use as a therapeutic following spinal cord injury," said Silver in the release. “We’re very excited at the possibility that millions of people could, one day, regain movements lost during spinal cord injuries,” he added in an NIH release.

Find out more about the breakthrough below: