Newly Discovered Giant Predatory Dinosaur Had Tiny Arms, But It's Not Related to T. Rex

How Meraxes gigas may have looked. (Carlos Papolio)

Researchers have discovered a new species of giant dinosaur that has been called Meraxes gigas: just like the Tyrannosaurus rex, M. gigas has very short forelimbs, and it seems that both of these massive dino theropods evolved the trait separately.

Not only are T. rex and M. gigas a long way apart on the evolutionary tree, the newly discovered species became extinct during the Late Cretaceous period, some 20 million years before T. rex even appeared on the scene.

M. gigas belongs to a group known as the carcharodontosaurids, large and predatory theropod dinosaurs, characterized by hollow bones and limbs with three main digits. They're some of the biggest predators to ever stomp across Earth. 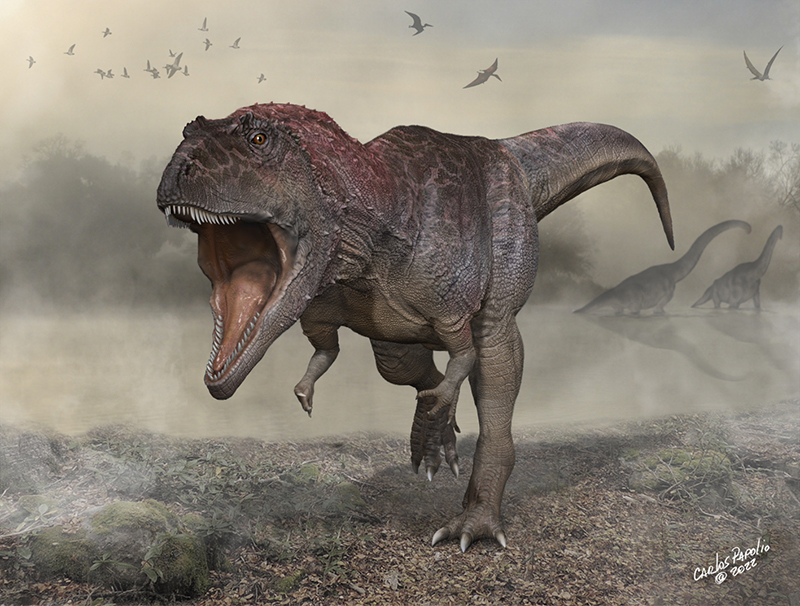 "The fossil of M. gigas shows never seen before, complete regions of the skeleton, like the arms and legs that helped us to understand some evolutionary trends and the anatomy of carcharodontosaurids," says paleontologist Juan Canale, from the Ernesto Bachmann Paleontological Museum in Argentina.

Based on an analysis of fossil bones recovered in the northern Patagonia region of Argentina, the researchers determined that the dinosaur they'd discovered was 45 years old when it died, about 11 meters (36 feet) long, and weighed more than four tons.

The question is: what were its short arms used for? From the skeletal remains, it's clear that the forelimbs had strong muscles, so it's apparently not through a lack of function that the arms shrunk down to a smaller size.

There must have been some sort of survival advantage, the team behind the study thinks, but the stubby limbs probably weren't used to hunt – the large head was most likely the main hunting weapon, as is the case with the more familiar T. rex.

"The group flourished and reached a peak of diversity shortly before [they] became extinct," says Canale.

"They may have used the arms for reproductive behavior such as holding the female during mating or [to] support themselves to stand back up after a break or a fall." The excavation site in northern Patagonia, Argentina. (Juan I Canale)

Further discoveries included a series of crests, bumps, furrows and small horns on the skull of M. gigas – the thinking is that these ornamentations didn't appear until adulthood, and were quite possibly intended to attract mates.

The team behind the discovery says it's possible that M. gigas will help to answer many more questions about the evolution of dinosaur species, and how such disparate types of dinos could also end up evolving in the same way.

"The fossil has a lot of novel information, and it is in superb shape," says Canale.

"We found the perfect spot on the first day of searching, and M. gigas was found. It was probably one of the most exciting points of my career."