How did Earth's tectonic plates form? You'd think this would be an easy question to answer, considering we're now trying to nail down the specifics of when it happened, and whether there's tectonic activity on the Moon. But our knowledge on how this planetary mechanism came to be is surprisingly scant.

Researchers from China, Hong Kong, and the United States have now put forward a new hypothesis – one that, on face value, looks incredibly similar to an idea discredited decades ago, but now deserves to be revisited.

Tectonic plates have been shuffling around our planet's surface anywhere from 3.3 to 4.4 billion years ago, depending on who you ask. But a few billion years of tectonic movement and crust recycling has meant it's quite difficult to work out how Earth came to have tectonic plates in the first place.

A couple of years ago, researchers developed a model showing that tectonic plates first formed in a process similar to how they've continued to shift - with some parts of Earth's crust taking a dive beneath others and starting a chain reaction of jostling pieces of crust that lasted millennia.

But the new research presents a model that shows something quite different. The research team proposes that billions of years ago, Earth's recently formed shell became hot, which caused an expansion of the shell, leading to a fracturing that resulted in what we now know as tectonic plates.

"Here we use 3D spherical shell models," the team writes in their new paper, "to demonstrate a self-organised fracture mechanism analogous to thermal expansion-driven lithospheric uplift." 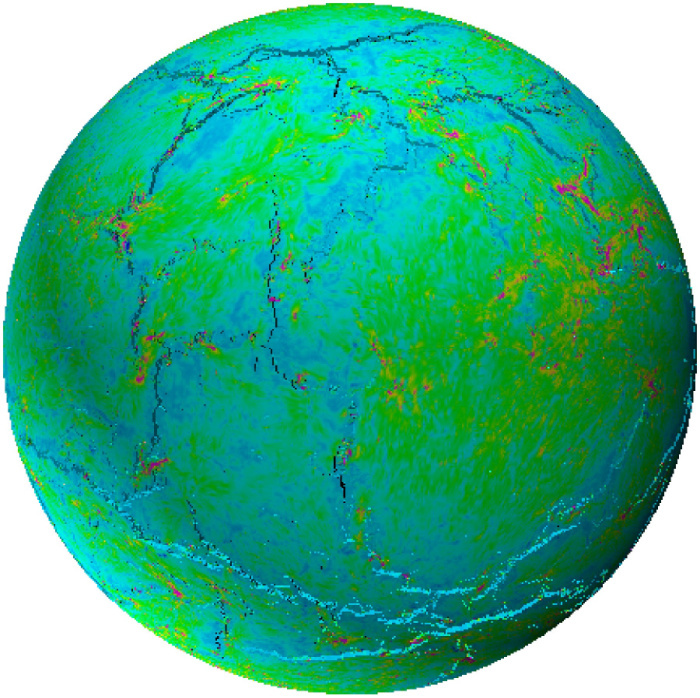 Above: A snapshot of the model showing late stages of growth and coalescence into the plate tectonic Earth. Fractures are in black, and colours show stresses.

Now, the expanding Earth hypothesis is not a new idea. In the 1800's, an expanding Earth was proposed to explain how geographical features like mountains may have formed; however, it was discredited when we discovered plate tectonics.

But the new scenario isn't quite the same as the one put forward during Charles Darwin's era. The crucial difference comes down to where Earth blew off steam all those years ago.

"The answer lies in consideration of major heat-loss mechanisms that could have occurred during Earth's early periods," said University of Hong Kong planetary scientist Alexander Webb.

"If volcanic advection, carrying hot material from depth to the surface, was the major mode of early heat-loss, that changes everything."

It boils down to whether Earth's heat loss occurred by conduction (radiating equally across the planet) over a long period of time, or if volcanoes spewed lava (and heat) out from inside the planet onto the surface where it cooled.

This build-up of cooled material would have eventually sunk and cooled the lithosphere, slowing down the volcanoes along with Earth's overall cooling. In turn, this would have trapped the planet's inner heat, which expanded the crust, causing it to crack and form tectonic plates.

"Our numerical experiments show that the polygon fissures could develop on Earth's surface in response to shallow lithospheric processes, with triple junctions as by-products of fracturing," the team writes in their paper.

"The rapid development of the fracture network in each experiment occurs at around 1 km total expansion and takes ~5 million years."

It's important to note that this study is just one hypothesis. We're still a long way off from understanding what happened on ancient Earth to result in tectonic plates. But with more evidence, this hypothesis could be an important part of working out our planet's unique features.