Scientists Have Captured a Giant, 'Mythical' Siren Species in Florida

Salamanders are, by their very nature, slippery creatures. Perhaps none so slippery as the mysterious 'leopard eel' - an amphibian spotted intermittently in the waters of Florida over the last few decades that somehow managed to elude scientific study.

Until now, that is. Ecologist Sean Graham of Sul Ross State University in Texas and colleagues have finally managed to locate and observe the mythical beast, and it's one of the strangest salamanders ever seen.

Like other members of the genus, it's large, coming in at 61 centimetres (two feet), and it has a body more like an eel than a salamander - long and sinuous, with only a single pair of front legs.

But S. reticulata is also gorgeously patterned with leopard-like spots; and although other sirens breathe through intricately branched, tree-like external gills, like other non-transforming salamanders such as axolotls, those of S. reticulata are particularly large and resplendent.

And although it's technically amphibious, in practice it's entirely aquatic, spending its entire life in bodies of water. 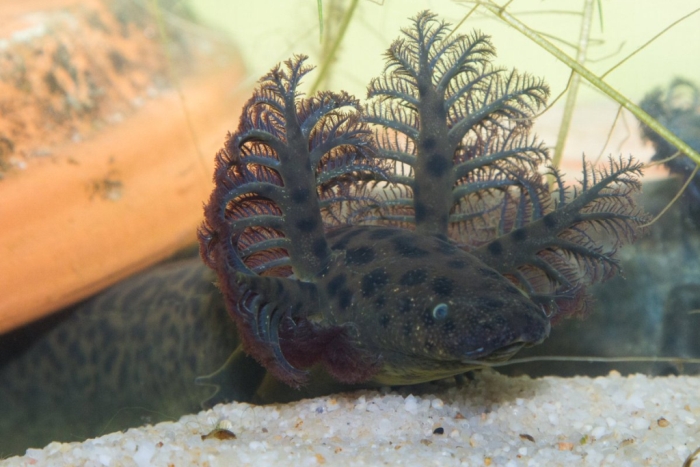 A specimen of this creature was collected as early as 1970, and it was briefly mentioned in a paper in 1975. It has also been known to locals as the 'leopard eel', said to be yellow with purple spots (it's closer to greenish-yellowish with greenish-purplish spots).

But for some reason no one had taken the time to actually sit down and properly describe it as a species - a fact that baffled Graham and his colleague, ecologist David Steen of the Georgia Sea Turtle Center.

"Ornithologists would have cut the throats of competitors to be the first to describe a new bird species in North America," Graham wrote in a blog post.

"And a bird with comparable uniqueness to this animal would have looked something like an ostrich with polka dots."

But describing the leopard eel - neither a leopard, nor an eel - proved easier said than done. Steen captured his first specimen in 2009; then, he heard about a herpetologist who was also working on describing the salamander, so he and Graham held back on their research out of respect.

When, after a year, the pair had heard nothing, they decided they would move forward with their research. But it would take the team five years to collect enough of the salamanders for a description, National Geographic reports.

Then the genetic analyses proved much more complicated than expected, because it turns out there may be more species of sirens than thought.

And then, in March 2018, the salamander geneticist dropped out of contact, so Graham and Steen decided to go ahead with publishing, even with limited genetic information.

"We received critical reviews from four reviewers early this summer," Graham wrote. "The reviewers pointed out that this was not a comprehensive paper and that it may have raised more questions than it answered, but begrudgingly admitted that we had done the necessary work to show that the Leopard Eel was different and the work we had done was technically sound."

And that's why we're only hearing about the reticulated siren now, nearly 50 years after the first specimen was collected in Florida. And isn't she a beauty.

You can (and should) read the epic story of Graham and Steen's work here on the Living Alongside Wildlife blog - it's an absolutely wild ride.

And you can read the paper here, finally published in the journal PLOS One.