To prove a basic property of physics, Norwegian physicist Andreas Wahl tied himself to the side of a building, 45 feet (13.7 metres) off the ground. The only thing keeping him from falling and potentially breaking a body part, or several, was a cable with a weight attached to the end.

At first, the weight was secured to the building. But then a few of Wahl’s colleagues released the weight and Wahl immediately began to plummet to the ground.

While Wahl’s experiment seems risky, he’s actually safe. And that’s all thanks to a fundamental property of physics called centripetal force. 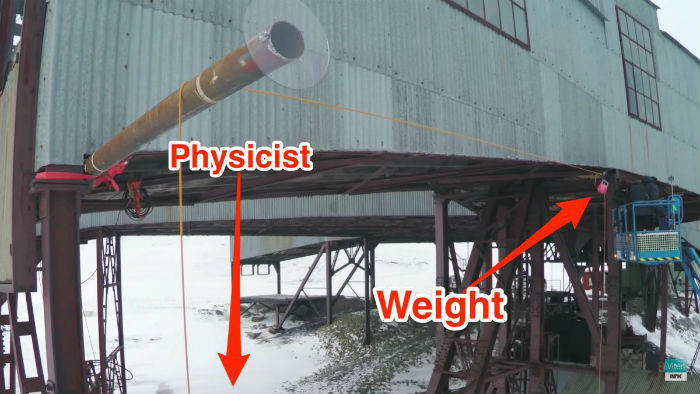 When Wahl’s colleagues released the weight, both he and it started to fall. Wahl fell straight under the force of gravity, but the weight - because it was placed at a distance from Wahl - traced an arc through the air, just like a swinging pendulum.

The weight underwent what Isaac Newton first described in the 17th century as centripetal force - the force that makes a body follow a curved path. In this case the force was the tension from the cable.

As the force of gravity pulled the weight down, tension from the cable pulled it toward a central point - the pipe. This induced an arc, which you can see below:

The weight continued to swing through the air, wrapping itself around the pipe. Due to conservation of angular momentum, the rate of the weight’s motion accelerated as the length of cable between the pipe and the weight shortened.

After a couple of wraps, the weight stopped Wahl’s fall just a few feet above the ground.

One important note: The friction between the cable and the pipe - as well as the cable’s elasticity - helped to slow Wahl’s motion as he drops. This reduced the jerk he felt when he came to a halt. If he’d felt the full jerk he might have broken his back.

Therefore, don’t try this at home. Leave this sort of thing to the physicists.

Watch all the action below: