With over a hundred thousand people waiting for an organ transplant in the US alone, scientists are racing to find options besides human donors. Now for the first time, a pig kidney has been successfully transplanted into a person.

When we say "successfully", it was only tested for 54 hours in a human patient – a patient who was already brain dead and being kept alive artificially. But as far as the transplant team could see, the kidney was connected and functioning normally during that time.

Technically, this is known as xenotransplantation, or the transplanting of tissues or organs from one species to another. If the work pioneered here can be developed, pigs could provide an abundance of organs suitable for use in people who need them. Currently, an average of 17 people die on transplant waiting lists per day in the US. 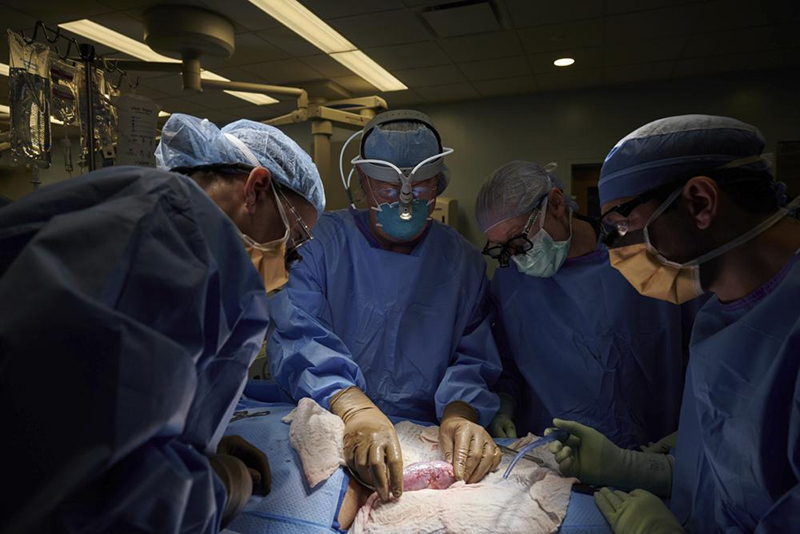 The operation to attach the kidney. (Joe Carrotta/NYU Langone Health)

"This is a huge breakthrough," Dorry Segev, professor of transplant surgery at Johns Hopkins School of Medicine, who was not involved in the research, told the New York Times. "It's a big, big deal."

There are still plenty of hurdles to overcome, including regulatory approval, but using organs from other animals in this way could also help the hundreds of thousands of people who aren't considered at risk enough to get a transplant, but who have to deal with demanding kidney dialysis procedures.

Organs from pigs have long been considered as potentially suitable for humans, but pig cells include a sugar called alpha-gal, which triggers an immediate rejection by the human body. In this case, the pig had been genetically engineered to not produce alpha-gal.

While the pig kidney was kept outside of the body of the patient, it was observed to be doing its job during the operation: that is, filtering out waste products from the blood and producing urine.

"It's even better than I'd hoped," surgeon Robert Montgomery, who led the transplant at NYU Langone Health in New York City, told USA Today.

As yet, there's no peer-reviewed scientific report of the operation, but we can be cautiously optimistic. Experts say trials with pig kidneys on critically ill humans – patients with no real other options left – could happen within two years.

There are ethical concerns to consider though. While the family of the human patient in this test gave their consent to it, not everyone is comfortable with the idea of breeding animals specifically to harvest their organs.

What might make organs from pigs more acceptable than organs from other animals – such as monkeys – is that pigs are already bred for food. They have large litters, short gestation periods, and organs that are similar to the ones we have.

We're already using pig skin grafts for burns and pig heart valves in humans, and experiments have already been carried out with pig hearts in baboons, so there is something of a precedent. Expect to hear much more about the potential of using pig organs inside humans in the years to come.

"This is an important step forward in realizing the promise of xenotransplantation, which will save thousands of lives each year in the not-too-distant future," Martine Rothblatt, the chief executive of United Therapeutics – the company that genetically engineered the pig – told The Guardian.