A Rare Frilled Shark Has Been Caught in Australia

This extremely rare frilled shark has unfortunately been pulled out of the water by a fishing trawler near Lakes Entrance in Victoria's Gippsland region.

Once you get over the fact it looks just like the chest-buster from Alien, it's actually quite a fascinating and rare discovery - and the first time the species has been seen in the region in living memory.

Scientists from Australia's national science agency, the CSIRO, have confirmed that the specimen is a frilled shark, Chlamydoselachus anguineus, a rare species that's ancestory dates back 80 million years.

"We couldn't find a fisherman who had ever seen one before," a representative from the South East Trawl Fishing Industry Association (SEFTIA), who caught the shark, told ABC News. "It looks prehistoric, it looks like it's from another time!"

This specimen is only 2 metres long, but frilled sharks can grow up to 5 metres long. They're found in a handful of scattered locations in the Pacific and Atlantic oceans, including off the coast of Morocco, Scotland and Japan.

The species gets its name from its six pairs of gill slits, which have a fringed appearance, and although it looks more like an eel, it has the fins and tail of a shark.

And the teeth - fringed sharks have 300 needle-like teeth over 26 rows, which they use to swallow prey, such as cephalopods and bony fish, whole. "Once you're in that mouth, you're not coming out," Boag told ABC.

While it's unfortunate that this individual got caught up in a fishing net, it's not something the species is normally at risk of. Although the sharks can live as deep as 1,500 metres below the ocean, they're most commonly found around at depths of 1,200 metres. This one was found at around 700 metres - which is generally the limit for trawling - so, apparently, it was just unlucky.

You can see more images of the find below, as well as some footage of a frilled shark filmed in Japan back in 2007. 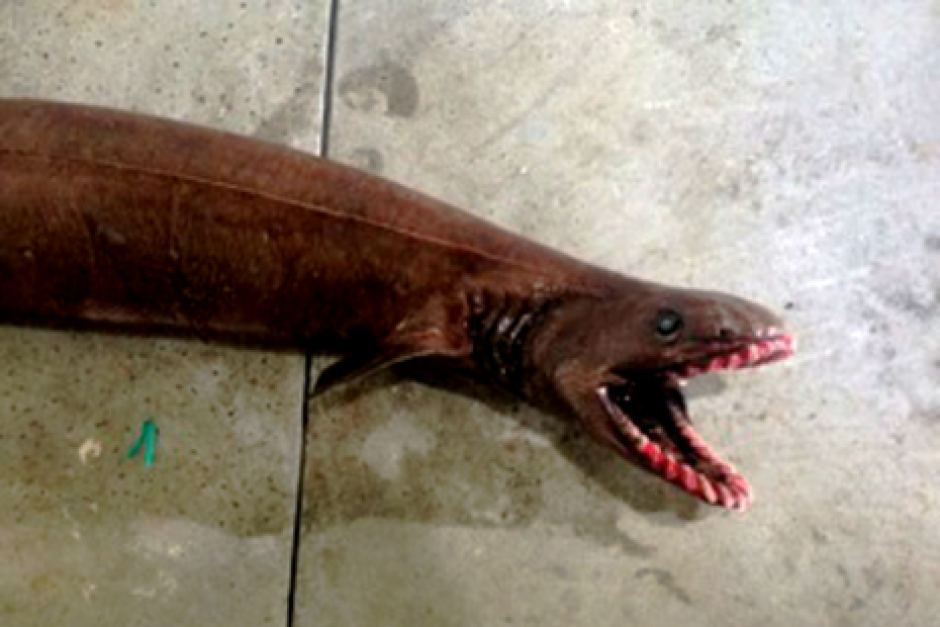