This Sunday, parts of the Southern Hemisphere will witness a spectacular 'Ring of Fire' eclipse, as the Moon moves between us and the Sun and blocks it almost entirely from view, save for a burning outer ring.

The event will be visible to those graced with good weather in southern South America and southern Africa. But that doesn't mean the rest of us have to miss out - you can watch from the comfort of your couch via the Slooh livestream below.

The live stream starts at 7am EST on Sunday, 26 February (12 noon UTC, and 11pm AEDT), with the eclipse making landfall in southern Chile around 10 minutes later.

A 'ring of fire' eclipse is scientifically known as an annular eclipse, and it occurs for the same reason as a total solar eclipse - the Moon moves in between the Sun and Earth as it orbits around our planet.

But unlike a total solar eclipse, the Moon is too far away from us to completely block the Sun out, which leaves a very thin ring of burning solar plasma visible to us here on Earth.

"Because you have this thin little ring around the edge of the Moon where the Sun pokes out, it gives it that ring of fire effect," C. Alex Young, a solar astrophysicist with NASA, told Nicholas St Fleur from the New York Times.

The reason the Moon is too far from us at the moment to block out all of the Sun is because its orbit is elliptical - this Sunday, the Moon will be close to its greatest distance away from us, known as its apogee.

Still, our lunar satellite will manage to block out up to around 99 percent of the Sun for everyone under this thin path, known as the path of annularity. 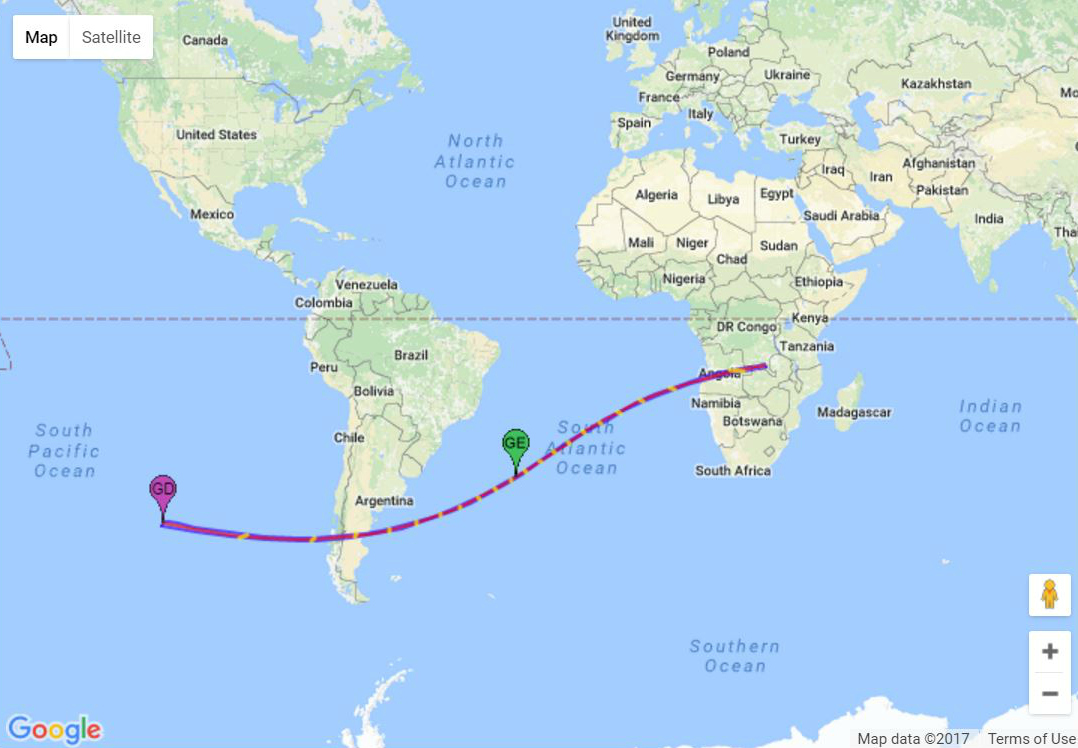 The path of annularity is where the Moon's shadow is cast on our planet, and it can vary anywhere between 29 and 89 km (18 and 55 miles) in width.

The eclipse touches down in Chile around 9.10am local time before moving into Argentina and then travelling eastwards across the Atlantic to touch down on the African nations of Angola, Zambia, and the Democratic Republic of the Congo around 160 minutes later.

According to Young, skywatchers in Argentina will get one of the best views, and will be able to see around 97 percent of the Sun covered by the Moon for about a minute.

Those in the Democratic Republic of the Congo will also be able to see an incredibly rare and beautiful sunset.

"Instead of a reddened ball, the Sun will resemble a fiery hoop," writes Joe Rao for Space.com.

Even outside the path of annularity, people will see some of the show. The lower two-thirds of South America, western and southern Africa, and most of Antarctica will be able to see a partial solar eclipse, which will look like something's taken a huge bite out of the Sun.

The good thing is, Slooh has a network of observatories it works with, so those of us watching online will be able to experience the ring of fire, too.

For anyone who is watching it in person, NASA has put out a reminder to use a pinhole camera or solar viewing glasses - just because most of the Sun is blocked from view, doesn't mean it can't still damage our eyes.

While this is the first eclipse of 2017, it definitely won't be the last - people are already getting excited about the 'Great American Eclipse' that will be visible across most of the continental US on August 21.

But that will be a total solar eclipse, where the Moon will block out the entire Sun, casting millions of people into shadow temporarily.

"While the annular eclipse is pretty exciting with its 'ring of fire' effect, it's still just this bright object in the sky. But during the solar eclipse it's not just what you see, it's what you experience. The whole environment changes."

You can find out everything you need to know about how to view that eclipse here - but start planning soon, because all the best viewing spots are already booking out.