A Star Has Been Kicked Out of The Milky Way. It Knows What It Did

Every once in a while, the Milky Way ejects a star. The evicted star is typically ejected from the chaotic area at the center of the galaxy, where our Super Massive Black Hole (SMBH) lives.

But at least one of them was ejected from the comparatively calm galactic disk, a discovery that has astronomers rethinking this whole star ejection phenomenon.

The star in question is a fast-moving star, or what's also called a hypervelocity star. Hypervelocity stars are rather rare in our galaxy. The first one was discovered in 2005, and so far researchers have discovered fewer than 30 of them.

They travel at more than a million miles per hour, or 500 kilometres per second, twice as fast as other stars, and it takes an enormous amount of energy to propel them to that velocity.

To understand what's going on, take a look at the overall structure of the Milky Way. 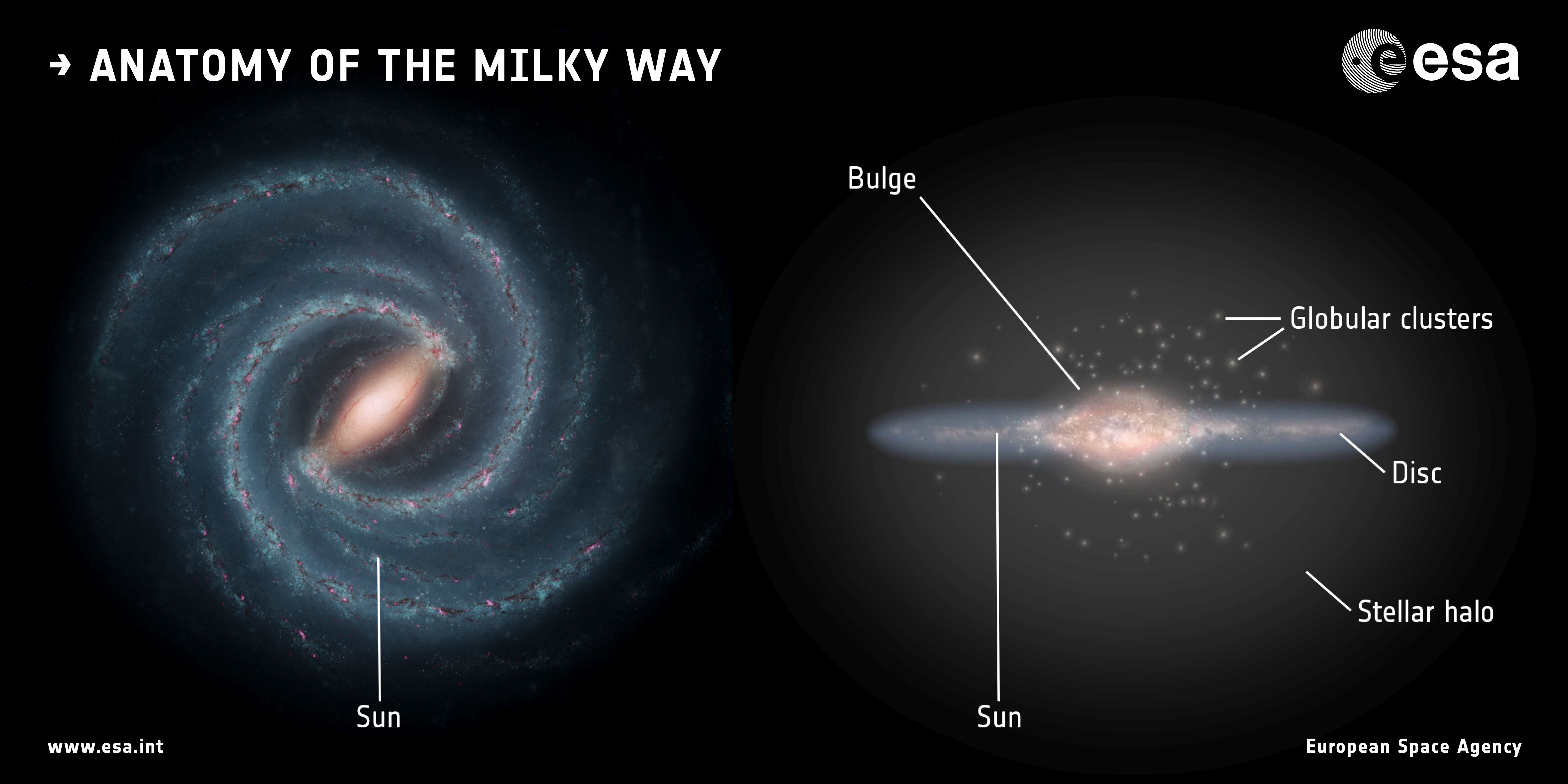 The structure of the Milky Way. (ESA)

The galactic bulge is in the center, and deep in the heart of that bulge is our galaxy's SMBH, Sagittarius A* (Sag. A-star.) Spreading out all around it is the galactic disk, made up of the Galaxy's spiral arms. Of less importance in this study are the stellar halo and the globular clusters.

When a star is kicked out of the galaxy, it's usually one star from a binary pair. Scientists think that as a binary pair get too close to the SMBH and its overwhelming gravity, the hole captures one of the stars.

The other star is shot out into space in a "gravitational slingshot." The black hole has to be a super massive one, because only they have powerful enough gravity to accelerate these run-away stars to such high velocities.

But researchers from the University of Michigan have identified one hypervelocity star that appears to have been ejected from the stellar disk rather than the galactic bulge.

Then they joined with other colleagues and combined their data with data from the ESA's Gaia mission to trace the hypervelocity's trajectory back to its origin. They were surprised when the origin of the star was not the bulge, but the galactic disk.

"This discovery dramatically changes our view on the origin of fast-moving stars," said Valluri, a research professor in the Department of Astronomy at U-M's College of Literature, Science, and the Arts.

"The fact that the trajectory of this massive fast-moving star originates in the disk rather that at the galactic center indicates that the very extreme environments needed to eject fast-moving stars can arise in places other than around supermassive black holes."

What would those possibilities be?

The authors aren't sure at this point. One possibility is an encounter of a different kind. The runaway star may have had an encounter with a whole cluster of other massive stars, and been ejected by a complex interplay of gravity.

This type of encounter has created runaway stars in the past. But nothing that travels as quickly as LAMOST-HVS1. Star-cluster runaways have been clocked at 40-100 km/s (25-62 miles/second), but none have come close to the 500 kilometres per second that this star travels at.

Another, more exotic possibility is a black hole. There may be other, intermediate black holes in the galactic disk with enough gravity to fling the star out into space. But that's little more than a guess.

If it's a star cluster that ejected LAMOST-HVS1, then it's one nobody's seen yet. The hypervelocity star came from the Norma spiral arm, an area not associated with any known massive star clusters.

However, that area is well-obscured by dust. There could be a cluster there with enough mass to eject the star.

If astronomers could find a massive cluster there, then it may show that all hypervelocity stars were ejected from encounters with massive clusters, and the SMBH has nothing to do with it.

Or, bear with me here, the massive star cluster could have an intermediate black hole at its center, powerful enough to eject the star.