A Bizarre Tardigrade Was Found With a Belly Full of Strange, Glittery Material

When you put a tardigrade under a microscope, you never know what you're going to get. These weird-looking 'water bears' are some of the strangest creatures on the planet, and they are constantly surprising us. Even once you see them with your own eyes, it can be hard to figure out what the heck is going on.

Biologist Rafael Martín-Ledo has been studying marine microfauna such as tardigrades for years, and recently, on a mossy bank of the Saja river in northern Spain, he collected one that looks even stranger than the rest.

Using phase contrast microscopy, which highlights changes in brightness and tiny structures, Martín-Ledo has revealed a squirming water bear with a stomach full of glittering lights.

The biologist and school teacher posted a short yet mesmerising video of the scene on Twitter this week, with the caption: "Guess what I've got in my tummy?"

Guess what I've got in my tummy? #Waterbear collected in a moss on the banks of the river Saja. #Tardigrades from Cantabria.
Rafael's answer: aragonite crystals pic.twitter.com/iSZoixQf5F

Like most tardigrade things, nobody knows what is going on here. For now, it's still too early to say what this iridescent material even is, let alone where it came from.

Even still, Martín-Ledo has a suggestion. He has posited that the shimmering effect is the result of aragonite, a common crystal form of calcium carbonate that is often seen in the shells of marine animals.

And he thinks it may have come from the tardigrade swallowing parts of it very own mouth.

To understand how this is even possible, it's important to know a little bit about tardigrade anatomy. These eight-legged wrinkly bears have long tubular mouths, which are armed with a pair of crystal-like teeth called stylets. These are used to pierce plants or small invertebrates, sucking the fluids out of their prey.

The real key here is that a water bear's stylets are made almost exclusively of aragonite, and are replaced only when the tardigrade goes through its regular moulting process.

In short, Martín-Ledo thinks the creature may have accidentally swallowed its own mouth during its last moult.

It is a suggestion of mine.
I do not know what they do in the stomach, but, its buccal apparatus is made up of chitin and aragonite, so ... pic.twitter.com/gVry3vF1Un

While the possibility of cannibalism in tardigrades has been floated by some, Martín-Ledo is doubtful these crystals came from another tardigrade.

"The tardigrades which are predators feed by sucking the body fluids of rotifers, nematodes, ciliates etc," Martín-Ledo explained to ScienceAlert on Twitter.

"So I don't think there would be any possibility of it eating other tardigrade." 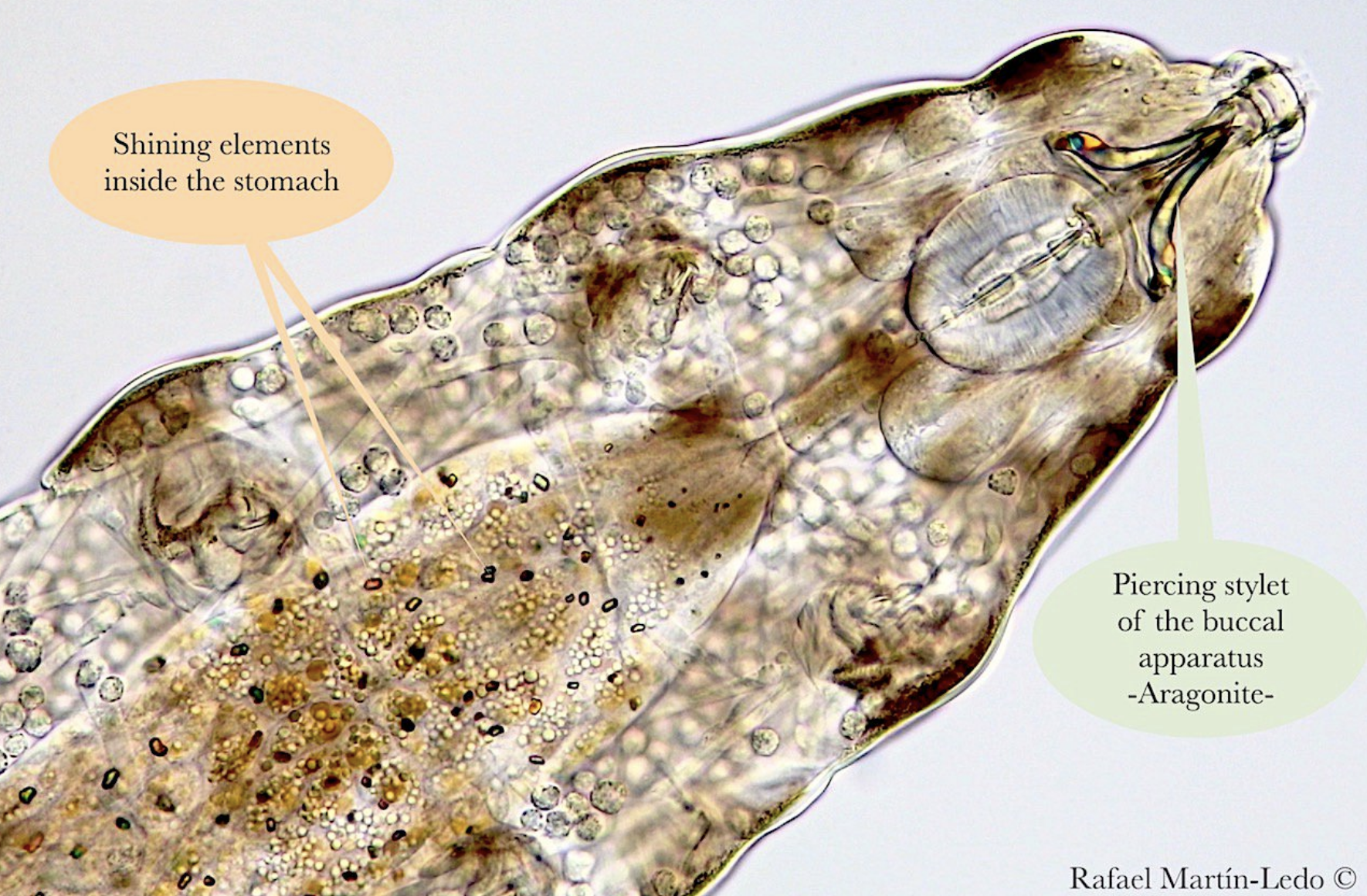 Kazuharu Arakawa, a molecular biologist at Keio University in Japan, is skeptical that the buccal apparatus could be consumed at all.

"Buccal apparatus is usually ejected during molting, and tardigrade buccal apparatus does not allow the direct consumption of chitinous structures," he told ScienceAlert.

"They are optimised to pierce into chitinous exoskeleton and suck the body fluid."

Instead, he thinks that if there were aragonite crystals in this tardigrade's gut, it would probably be from the algae or bacteria it eats.

But importantly, Arakawa stresses that's only if the strange shiny things are aragonite crystals at all, and for that we'll need to wait until biologists have conducted more research: "I cannot really assess anything without proper scientific publication."

While we wait for answers on this latest tardigrade mystery, at least we can still admire the amazing pictures.