A Tiny Brain, Skull, And Hair Have Been Extracted From a Teen's Ovary

Japanese surgeons have pulled a mass of hair, bone, and a tiny, malformed brain, from a teenager's ovary.

What started as a fairly routine operation resulted in a 10-centimetre 'monster' being pulled from the teenager's abdomen, according to a paper recently published in Neuropathology.

While performing a run-of-the-mill appendectomy on a 16-year-old female patient, the Japanese surgeons discovered a tumour growing on one of her ovaries.

What they found inside was pure nightmare fuel – hair, bone … and a tiny malformed brain. 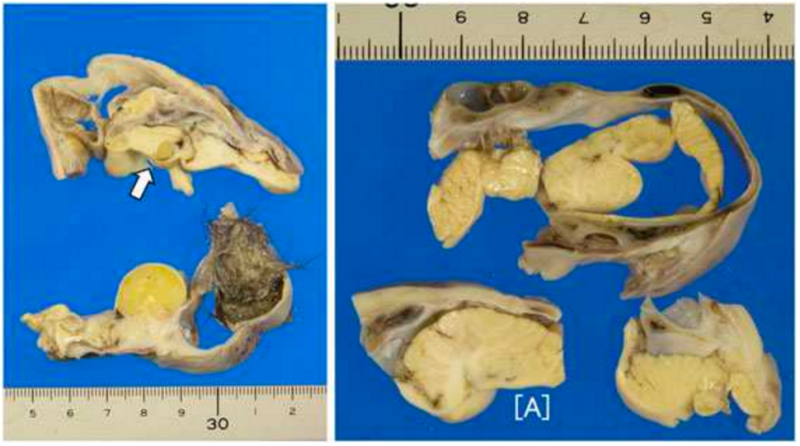 The technical term for the tumour is a mature cystic teratoma. The word 'teratoma' comes from the Greek word teratos, meaning monster, and it's easy to see why.

They are formed when a mass of cells inside a body grows into different tissue types, including bone, nerves, hair, and even teeth. They're typically a benign tumour surrounded by a capsule, making them relatively easy to remove.

Not to be confused with parasitic twins, which grow from a separate embryo that was absorbed while in the womb, teratomas are made from our own errant cells.

As with any cancer, they form when the normal signals controlling cell growth fail. Teratomas also happen to act like misbehaving stem cells.

In this particular case, it was an immature egg cell in the Japanese girl's ovary which ignored all signals to sit quietly.

Not only did her egg cell divide, those new cells took on the form of hair follicles and a thin layer of bone covering a brain-like structure resembling a brainstem and cerebellum.

Though rarely fatal, tumours which contain nerve cells pose a unique risk – where the immune system recognises the cancer as a threat, they can then mistaken the patient's own brain cells as an enemy.

Fortunately this patient showed no symptoms of an immune response against her own nervous system.

Discovering nerve cells inside a teratoma might not be all that unusual, but finding them arranged in a neurological structure, like in the case of this tumour, is extremely rare. Especially tissue that could carry nervous impulses.

As Angelique Riepsamen from the University of New South Wales told New Scientist: "Neural elements similar to that of the central nervous system are frequently reported in ovarian teratomas, but structures resembling the adult brain are rare."

Fully developed, the brain stem is responsible for life-giving functions, while the cerebellum manages has a key role in controlling our movement. Rest assured, however, that this tiny blob of cells found in this teenager is far from being a thinking, feeling being.

It's not the first time in recent history that such a fully developed teratoma has been found by Japanese surgeons. In 2002, a tumour with developing organs, head, body, extremities, and even the beginnings of a penis was removed from a 25-year-old Japanese woman.

They might sound like something straight out of a horror movie, but teratomas provide fascinating insights into what makes us develop.

We hope this patient has a speedy recovery following her surgery.