We Just Had The Only Total Solar Eclipse of 2020, And The Photos Are Amazing

Thousands of people turned their heads to the sky to watch a solar eclipse that lasted around two minutes on Monday as southern Chile and Argentina were plunged into darkness.

Heavy rain had threatened to prevent star gazers in Chile from seeing the eclipse but at the last moment the clouds parted just enough for the phenomenon to be partially visible.

"It was beautiful, unique. The truth is that no-one held much hope of seeing it due to the weather and clouds, but it was unique because it cleared up just in time. It was a miracle," an emotional Matias Tordecilla, 18, told AFP in the town of Pucon on the shores of Lake Villarrica.

"It's something that you don't just see with your eyes but also feel with your heart," added Tordecilla, who traveled 10 hours with his family to see the eclipse. 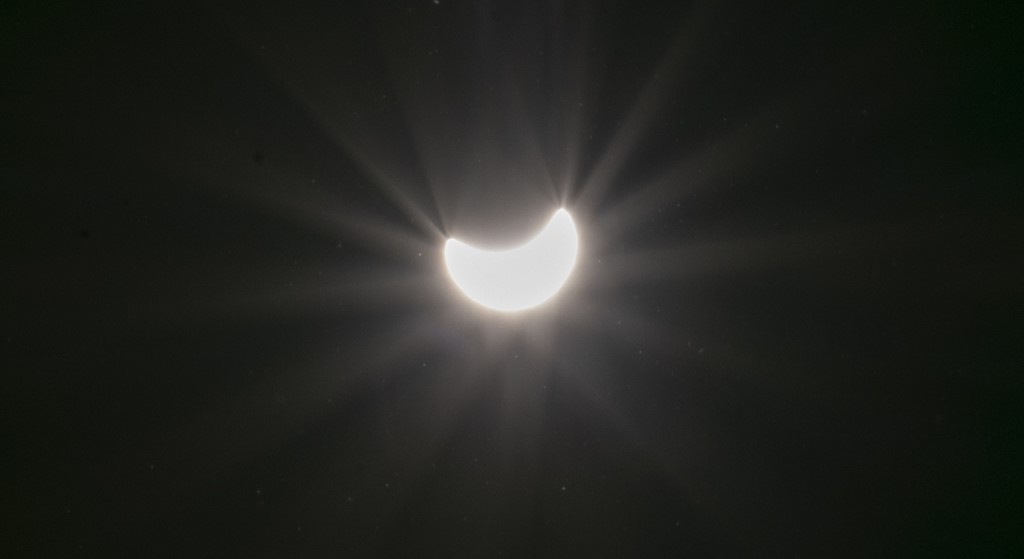 It was the second total eclipse for Chile in the last 18 months.

This one struck at 1:00 pm (1600 GMT) as thousands of tourists and residents gathered, hoping the clouds would disappear in time.

"It gave me goosebumps all over," said Pucon resident Cinthia Vega.

In Argentine Patagonia, several families and foreigners had set up camp between the towns of Villa El Chocon and Piedra del Aguila hoping to see the eclipse. 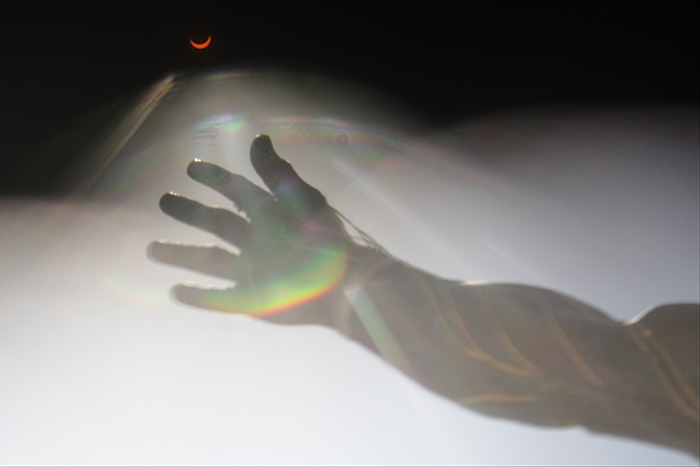 The arm of a statue is seen as solar eclipse occurs in Santiago, Chile on 14 Dec 2020. (Cristobal Saavedra Vogel /Anadolu Agency via AFP)

While there was no rain there, strong winds had threatened to impact visibility.

Despite COVID-19 restrictions on movement, almost 300,000 tourists had arrived in the Araucania region around 800-kilometers (500 miles) south of the capital Santiago.

Dozens of amateur and professional scientists set up telescopes on the slopes of the Villarrica volcano - one of the most active in Chile - to observe the phenomenon when the Moon passes between the Sun and Earth. The total solar eclipse as seen from from Pucon, southern Chile, on 14 Dec 2020. (Martin Bernetti/AFP)

The eclipse was due to be visible along a 90-kilometer wide corridor from the Pacific coast in Chile across the Andes mountain range and into Argentina.

In July 2019, some 300,000 people turned out in the Atacama desert in Chile's north, home to several observatories, to see the previous eclipse.

Chilean authorities had been worried that the eclipse would attract large gatherings of people.

There have been more than 570,000 coronavirus cases amongst the 18 million population with almost 16,000 confirmed deaths.

Strict controls were announced for the areas where the total eclipse would be visible, with free movement banned both the day before and after.

This event was eagerly anticipated amongst Chile's Mapuche indigenous community, the largest such group in the country's south.

"Today we were all hoping for a sunny day but nature gave us rain and at the same time it's giving us something we need," Estela Nahuelpan, a leader in the Mateo Nahuelpan community in the southern city of Carahue, told AFP.

"In Mapuche culture the eclipse has different meanings: they talk about 'Lan Antu', like the death of the Sun and the conflict between the Moon and the Sun," she said.

"It refers to the necessary balance that has to exist in nature."

In another tradition, an eclipse signifies the temporary death of the Sun during a battle between the star and an evil force known as "Wekufu".

According to indigenous expert Juan Nanculef, the people would light bonfires and launch "stones and arrows into the air" to help the Sun in its battle against the Wekufu.

Nanculef actually performed a ritual as the eclipse began to ask nature to bring an end to the rains and make it visible.

"Previously it was 100 percent effective," he said.

This time it seems to have worked just well enough to give people a glimpse of the eclipse.