Wriggling Roundworm Found in Woman's Tonsil After She Ate Sashimi

Eating raw meat of any kind carries with it a risk of parasites, but few are as well known as those found in sashimi. The Japanese delicacy can infect the eater with a number of unpleasant aquatic parasites.

In a new case report, doctors describe the unfortunate experience of a 25-year-old woman in Japan who had a particularly nasty surprise after eating sashimi. Five days after enjoying her meal, she rocked up to St. Luke's International Hospital in Tokyo with pain and irritation in the back of her throat.

Her blood tests were normal, and she seemed otherwise fine - but closer physical inspection revealed something awry - something black and squirming in her left tonsil. A short tweezer extraction later, the culprit was wriggling in a dish.

"The worm body was black, 38 millimetres long, 1 millimetre wide, and was moulting the outer cuticle [flexible exoskeleton]," the doctors write in their case report.

"DNA PCR and the fact that the worm was in exuviation revealed this worm was a fourth-stage larva of Pseudoterranova azarasi." 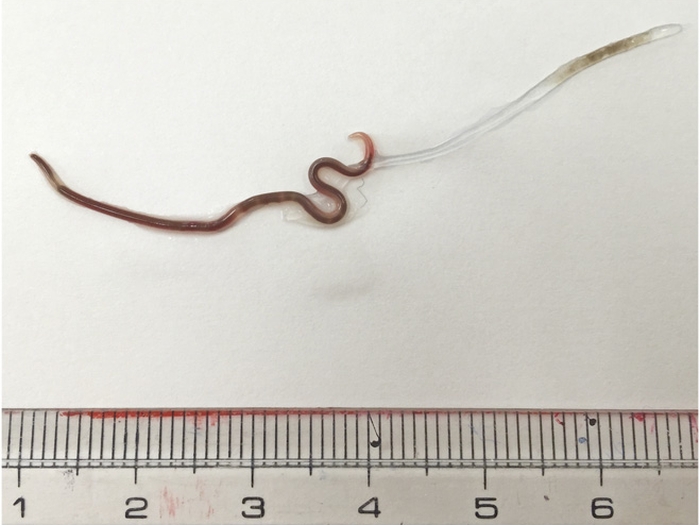 P. azarasi is a type of nematode, or roundworm, and - alongside tapeworms and herring worms - is a known hazard of eating sushi. Infection of the throat is rare - of the over 700 cases reported in the literature by the mid-1990s across Japan, the North Pacific countries, South America, and the Netherlands, most have occurred in the stomach.

Although it's a member of the Anisakidae family, the symptoms P. azarasi causes are generally not as severe as those caused by the herring worm, called anisakiasis, in which nematode larvae attach to the lining of the oesophagus, stomach, or intestine.

Because PCR - the process to replicate DNA in order to obtain a large enough sample for testing - is not widely available, the doctors therefore note that it's important to be able to identify P. azarasi visually.

"Although oropharyngeal infection is rare," the doctors write, "this infection is known to cause 'tingling throat syndrome' and cough and should be considered a differential diagnosis of oropharyngeal parasitosis as consuming raw fish, including sushi and sashimi, has become more popular and the number of reported cases has markedly increased worldwide."

Generally, freezing the fish should kill any parasites therein, and different countries have different guidelines for doing so. Some regions, however, have lax guidelines, or no guidelines at all, so it can be hard to determine whether the raw fish you're eating is safe.

There is something good about a throat infection, though; it's generally easier to treat. There is little to no pharmacological intervention - the best treatment is simply removing the worms, which is much easier in the mouth than in the stomach.

As for our patient, after the worm was removed from her tonsil, her symptoms cleared up quickly and she was sent home. Although, she may think twice the next time she has a craving for raw fish.

The case report has been published in The American Journal of Tropical Medicine and Hygiene.