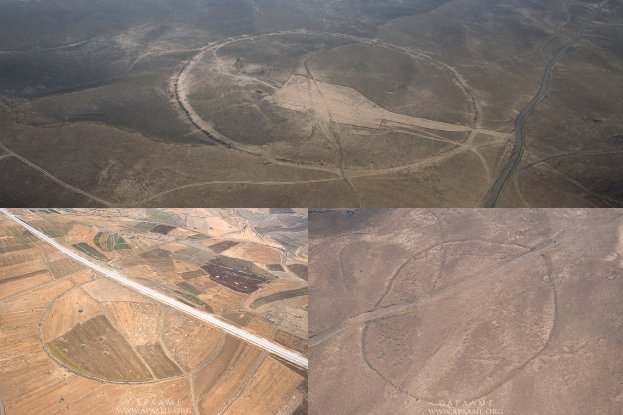 Huge, near-perfect stone circles found across Jordan have been photographed from above in unprecedented detail, providing insight into why these structures, which are at least 2,000 years old, were built.

For decades, these huge ancient stone circles have baffled scientists. Located across Jordan, the Big Circles, as they’re called, are between 220 to 455 metres in diameter - the largest are around three times the size of an Olympic running track. They're made from local, roughly cut boulders, no more than around a metre high.

But what makes them really unique is the fact that, actually, they're not that unique at all - there are 12 of these structures in Jordan, and one recently found in Syria, that are all pretty much identical in build. Their design is “too close to be a coincidence,” archaeologist David Kennedy, from the University of Western Australia, told science journalist Owen Jarus from Live Science. This has led archaeologists to believe they must have served a similar purpose, despite the fact they're spread out across the region.

Still, no one knows who built the Big Circles, when they were created and, most importantly, why they were there. (Cue alien theories). And although they were first spotted from an aircraft in the 1920s, little research has focussed on the circles - which, despite a few kinks here and there, were clearly intended to be perfectly round.

But high-resolution aerial photos are now helping to shed light on the subject. The images have been taken as part of the Aerial Photographic Archive for Archaeology in the Middle East (APAAME), which is led by Kennedy and aims to document important structures such as these from the sky.

Evidence from the images, as well as important dating of artefacts on the ground, suggests that the circles were built at least 2,000 years ago - and there's evidence they may have been constructed in prehistoric times, before writing was invented.

A lot of the materials used to build the circles, which appear to be local to each site, have been dated back to the Chalcolithic and Early Bronze Age, between 2,000 and 4,500 BC. However, there's also more recent material present, which typically dates back to the Roman period between 1st and 7th century BC.

The team's photographs, which have their own Flickr page, also revealed a new partially standing Big Circle in Jordan, and showed the still-visible remains of two that have been fully destroyed - one in Syria and one in Jordan.

And the images confirmed that none of the stone circles originally contained openings, so people would have had to jump over the walls to get inside. This means they wouldn't be suitable as corrals for housing livestock, which was a previously suggested theory.

One of the circles found contains three rock piles, known as cairns, on its edge, which may have been used for burial. But Kennedy told Jarus at Live Science: "my inference is that the cairns [were built] later, when the enclosure was no longer significant".

Importantly, there's no signficant reason a burial site or a corral would need to have such a precise round shape, he explains.

Kennedy explained to Live Science that while the structures wouldn’t have been hard to build - a dozen people working hard could have likely completed a Big Circle in a week - their perfect shape would have required some planning.

"In the case of those circles that [are] near-precise circles, it would have required at least one person as 'architect,'" Kennedy told Live Science. He added that this architect would likely simply haved tied a long rope to a post and walked in a circle to mark the shape of the structure."That would also explain the glitches [in the circles] where the land was uneven," said Kennedy.

The Syrian ruin was studied by scientists from the University of Durham before it was destroyed by towns nearby expanding into the area. In a paper in 2010, they explained that the Syrian Big Circle was positioned in such a way that it could be used to give someone inside it a panoramic view of the nearby basin - something that may shed some light on its function. However, the circle, which is near Homs, an area of Syria that has seen a lot of fighting since the Civil War began in 2010, is now completely destroyed.

There are many other smaller stone circles and interesting shapes visible from the sky around the Middle East, but these 12 Big Circles stand out in their size and age, explains Kennedy. His aerial work is extremely important, as there are many structures left un-investigated in the Middle East due to tensions in the region, and many of these ancient structures are at risk of being destoryed by war and population growth.

The next step, Kennedy explains, is for archaeologist teams to get into Jordan and excavate the Big Circle sites to more accurately date them and also find clues as to their purpose.

While the mystery is far from solved, Kenney wrote in the team's most recent journal article in the journal Zeitschrift für Orient Archäologie, that the "most important contribution is simply to collect and make known a large group of rather remarkable sites".

According to the Daily Mail, eight of the Big Circles are in west central Jordan, between the Wadi el-Hasa and the edge of the Shara escarpment, and the second group of four Big Circles is just north of the Azraq Oasis.

Find out more detail about the structures and see more images over at Live Science.

So who else is spending the rest of their afternoon trying to find the circles on Google Maps? Ten geek points to whoever finds them first.

Find out more about Kennedy’s work in this really cute Google Stories video: