We all know that we need to brush our teeth regularly to prevent the risk of cavities and gum disease, but according to a new report by the CDC, it's possible to have too much of a good thing.

Specifically, a new analysis of the dental hygiene habits of children and adolescents in the US reveals that almost 40 percent of young American kids are using too much toothpaste when they brush their teeth. Despite what we know about the benefits of fluoride, there is a limit to how much toothpaste you should be squeezing onto your brush.

"Children aged < three years should use a smear the size of a rice grain, and children aged > three years should use no more than a pea-sized amount (0.25 grams) until age six years, by which time the swallowing reflex has developed sufficiently to prevent inadvertent ingestion," researchers, led by oral health specialist Gina Thornton-Evans from the National Centre for Chronic Disease and Health Promotion, explain in the new CDC report.

Despite these guidelines, when the team analysed survey data sourced from over 5,000 children and adolescents who took part in the National Health and Nutrition Examination Survey (NHANES), they found that approximately 38 percent of children aged between three and six years used more toothpaste than what's recommended by the CDC and other professional organisations.

Amongst all the children aged three to six years old, about half (49.2 percent) used the correct, pea-sized amount. But 12.4 percent used too little (a smear), and the remainder used too much: 20.6 percent using a "half load", as the authors describe it, and 17.8 percent going the "full load". 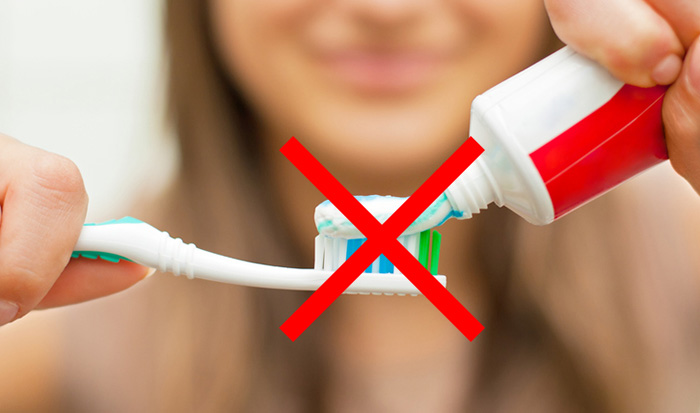 Nobody needs that much toothpaste. (TomFreeze/iStock/Science Alert)

It might seem like a small thing, but as the researchers point out, "ingestion of too much fluoride while teeth are developing can result in visibly detectable changes in enamel structure such as discolouration and pitting (dental fluorosis)", not to mention that toothpaste can contain other chemicals besides fluoride that aren't necessarily good for you when swallowed.

"Fluoride is a wonderful benefit but it needs to be used carefully," paediatric dentist Mary Hayes, who wasn't involved with the research, told Associated Press.

"You don't want them eating it like food. We want the parent to be in charge of the toothbrush and the toothpaste."

Of course, as parents of young children would readily understand, kids don't always do what you want them to – and tooth brushing is no exception.

But while it might be difficult to control how kids brush their teeth, it's important, researchers say – and not just in terms of toothpaste volume.

The study also found that almost 80 percent of children aged between three and 15 years had started brushing their teeth later than the recommended age – which is when the first tooth emerges from around six months on, the CDC says.

Further, over one-third of children (34.2 percent) analysed in the study only brushed their teeth once per day, not twice as is recommended to reduce the risk of cavities.

"What's really happening is that parents are following the rules of brushing twice a day, but they might not always be there," paediatric dentist Alene Marie D'Alesio from the Children's Hospital of Pittsburgh, who wasn't involved in the study, told The New York Times.

On the whole, though, as the report concludes, kids are indeed brushing their teeth – something we can be grateful for. But, much like your own dentist might say at the end of your visit, there's always room for improvement, yes?

"The findings suggest that children and adolescents are engaging in appropriate daily preventive dental health practices," the authors write, "however, implementation of recommendations is not optimal."