One of the newly discovered species - Cryptoforis hughesae. (Jeremy Wilson)

Trapdoor spiders are an ingenious lot. They create hidden burrows with silk-hinged trapdoors from which they emerge to nab their unsuspecting prey. They've also proven rather slippery when it comes to naming conventions.

The name 'trapdoor spiders' can refer to spiders from a wide range of taxonomic families across the world, and now a team of Australian scientists has found an entirely new genus living on the east coast of Australia – some species of which were originally thought to belong to another genus of trapdoors.

"Resolving the higher-level systematics of the Australasian spiny trapdoor spiders (family Idiopidae, subfamily Arbanitinae) has been a gradual process over more than three decades, involving several large-scale 'reshuffles' in which genera have been redefined and relimited," the researchers explain in a new paper.

Now, as you might expect with trapdoor spiders, it all comes down to the spiders' trapdoors.

Although they might all seem like a burrow with a lid on it, there's actually a large amount of variation in the way these eight-legged creatures create and show off their trapdoors.

We now know that the Euoplos group of spiders create either a plug-door or palisade burrow. Plug-doors are nearly indistinguishable from the surrounding ground when closed, and have an amazing ability to 'plug' their burrow hole, so well that they keep spiders safe from flooded creeks.

Palisade burrows on the other hand are showy, rising above the ground like a piece of exposed pipe.

Then there's another type of trapdoor spider that creates something called a wafer-door. These guys make a tiny, thin door above their burrows, which looks like a wafer biscuit. 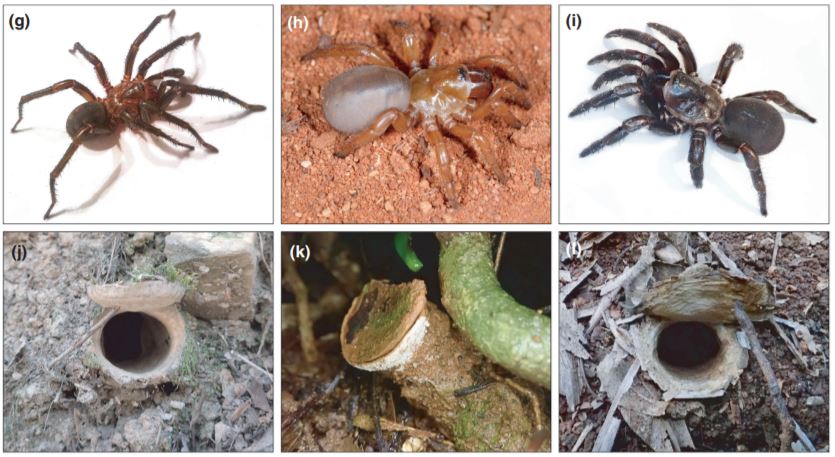 Not only do these spiders have original door styles, but they also look different and are genetically distinct from their plug-door or palisade-burrowing cousins.

"Before 2018, the wafer-door lineage was represented in the literature by just a single species, E. tasmanicus, from the southeastern island state of Tasmania, and was not known to occur in mainland Australia," the researchers write.

"This genetic divergence, and the difference in burrow entrance type between E. tasmanicus and the sampled mainland Euoplos, was noted by the authors, but at the time it was not seen as appropriate to erect a new, monotypic genus to accommodate an isolated, divergent species which otherwise fitted within the constraints of Euoplos as then defined."

The researchers have now found that 18 species - including E. tasmanicus - fit the wafer-door lineage. This means that a new genus is called for, which the team has named Cryptoforis, meaning 'cryptic door'.

"The incredibly well hidden burrows they create were also different to other trapdoor spiders in eastern Australia, which is probably why this new group of spiders remained undiscovered in the past," said Museo Argentino de Ciencias Naturales arachnologist, Jeremy Wilson.

So, now we know slightly more about Australia's incredible arachnids, although we're sure it's not the last we'll hear about the classification of these slippery spiders.

The research has been published in Cladistics.