The Length of a Day Oscillates Every 6 Years, And We May Finally Know Why

How we think about our planet's center may need to be seriously updated.

New evidence suggests that, instead of consistently rotating faster than Earth's spin, the solid inner core oscillates – spinning first in one direction with respect to the surface far above, then the other, changing direction every six years.

This not only has implications for our understanding of the inner workings of our home world, it can also neatly explain a mystery that has perplexed scientists for some time: an oscillating variation in the length of Earth's day, with a period of 5.8 years.

"From our findings, we can see the Earth's surface shifts compared to its inner core, as people have asserted for 20 years," said geophysicist John E. Vidale of the University of Southern California, Los Angeles (UCLA).

"However, our latest observations show that the inner core spun slightly slower from 1969-71 and then moved the other direction from 1971-74. We also note that the length of a day grew and shrank as would be predicted. The coincidence of those two observations makes oscillation the likely interpretation."

Although our understanding of Earth's core has developed a lot in recent decades, there's still a lot we don't know. We can't just go there and take a gander at it; everything we know, we've gleaned from indirect observations, such as seismic waves propagating and bouncing through the entire planet.

But this is still a very effective tool. Scientists have been able to ascertain that Earth's inner core is probably a hot, dense ball of solid iron, measuring roughly 2,440 kilometers (1,516 miles) across, a little bigger than the size of Pluto. Evidence also suggests that it demonstrates superrotation, rotating faster than Earth itself.

Researchers first detailed this phenomenon in 1996, with an estimated superrotation rate of 1 degree per year. Vidale and his colleague, Wei Wang, also of UCLA, later revised the rate down to 0.29 degrees per year, using data from underground nuclear tests conducted at the Russian Novaya Zemlya testing site in the 1970s.

In the new research, they went back in time, adding two tests conducted below Amchitka Island in 1971 and 1969. And that revealed something odd. The data suggested that, rather than superrotating, Earth's inner core was subrotating – that is, spinning more slowly than Earth's rotation, by about 0.1 degrees per year. 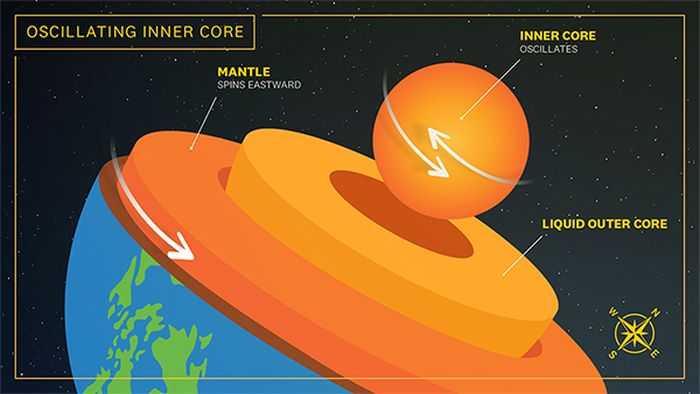 This, the researchers said, was consistent with oscillation. When in the full swing of its spin, the inner core superrotates, but then it slows down before speeding up again.

"The idea the inner core oscillates was a model that was out there, but the community has been split on whether it was viable," Vidale said.

"We went into this expecting to see the same rotation direction and rate in the earlier pair of atomic tests, but instead we saw the opposite. We were quite surprised to find that it was moving in the other direction."

The six-year periodicity of the oscillation neatly matches other oscillations for which we don't have a confirmed explanation.

Earth's days undergo time variations of plus or minus 0.2 seconds every six years or so, too, and Earth's magnetic field also oscillates with a six-year period. In amplitude and phase, they match the periodicity of the model Vidale and Wang derived for the oscillations of Earth's inner core.

This all means it will require more data to unravel, which could be tricky. The facility that recorded the data from the nuclear tests, the US Air Force's Large Aperture Seismic Array, closed in 1978, and underground nuclear testing is nowhere near as prolific as it used to be.

But further advances in sensor technology could mean that the detailed data needed to probe Earth's inner core isn't so far into the future; the results so far offer a tantalizing hint that Earth's insides are a bit more complex than we knew.

"The inner core is not fixed – it's moving under our feet, and it seems to [be] going back and forth a couple of kilometers every six years," Vidale said.

"One of the questions we tried to answer is, does the inner core progressively move, or is it mostly locked compared to everything else in the long term? We're trying to understand how the inner core formed and how it moves over time – this is an important step in better understanding this process."