You can't feel it, but our planet is orbiting the Sun at speeds of roughly 100,000 km/h (62,000 mph), and something is making our Milky Way galaxy move through the Universe at more than 2 million km/h (1.2 million mph). That's 630 km per second, and now scientists might have finally figured out why.

In front of us, there's a dense supercluster of galaxies some 650 million light-years away called the Shapley Concentration, and it's pulling us towards it. Behind us, scientists have found evidence of a previously unknown region of space that's almost entirely devoid of galaxies, and it's pushing us away with incredible force.

Cosmologist Yehuda Hoffman from Hebrew University in Israel and his team have constructed a new 3D map of our nearest galaxies, and in it, they've revealed this mysterious 'dead zone' for the first time, and dubbed it the Dipole Repeller.

As you can see in the animation below, we're stuck in the middle of the two, as the low-density Dipole Repeller pushes the Milky Way away from it, and the super-dense Shapley Concentration drags us towards it:

"By 3D mapping the flow of galaxies through space, we found that our Milky Way galaxy is speeding away from a large, previously unidentified region of low density. Because it repels rather than attracts, we call this region the Dipole Repeller," Hoffman explains to Victoria Woollaston at Wired.

"In addition to being pulled towards the known Shapley Concentration, we are also being pushed away from the newly discovered Dipole Repeller. Thus it has become apparent that push and pull are of comparable importance at our location."

In the past, researchers have suggested that a very low-density region of space could be lurking behind our galaxy, because while the Shapley Concentration is incredibly massive, on its own, it can't explain that speeds that the Milky Way is travelling.

And that really says something, because the Shapley Concentration is the largest known concentration of matter in the local Universe - a region of space that's approximately 1 billion light-years in radius.

The only problem is, we can barely even detect a planet that's 4.25 light-years away, let alone find something that's millions of light-years away, so researchers have struggled to fit that piece of the puzzle together.

"There was a hint of the void from studies of the distribution of rich clusters of galaxies that emit X-rays, discussed in articles over a decade ago," one of the team, Brent Tully from the University of Hawai'i, says in a press statement. "But the statistics were not sufficient to be convincing."

But now Hoffman and his team have figured out how measurements from more than 8,000 nearby galaxies, taken from an array of observatories, including the Hubble Space Telescope, fit into our cosmic neighbourhood, and these movements give us the first real evidence of the great Dipole Repeller.

All those forces combined look a little something like this: 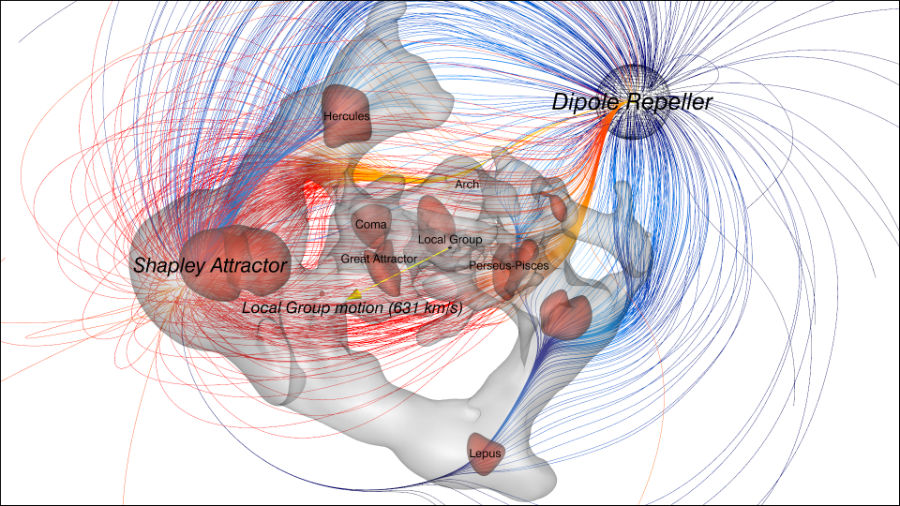 Oddly enough, according to data from the Cosmic Microwave Background - the 'afterglow' of the Big Bang - these two forces appear to be pushing and pulling us with an equal amount of force, and they sit in front and behind the Milky Way on the same axis.

Now that we have the first real evidence that something as vast and empty as the Dipole Repeller is lurking behind the Milky Way and our neighbouring galaxies, the next step is for researchers to try and confirm its existence.

The other possibility is that this region could be not one, but a whole fleet of superclusters and voids, all working to buffet us away, as another, more massive supercluster draws us in.

As Hoffman told Ian Sample at The Guardian, "It's a story of love and hate, attraction and repulsion."