The oldest bones of Homo sapiens ever found in Europe have been discovered in a Bulgarian cave, providing the earliest known evidence of our species' emergence in the European continent, according to new research.

The appearance and spread of modern humans in Europe is a difficult timeline for researchers to reconstruct, owing to a scarcity of sufficiently ancient remains that have been identified in the fossil record.

When modern humans did show up, though, our arrival ultimately sealed the fate of the indigenous Neanderthals who called Europe home before us, as we then proceeded to swiftly replace them over the course of the next several thousand years. Now, the chronology of this mysterious transition during the Initial Upper Palaeolithic period has come into clearer view, thanks to the discovery and dating of H. sapiens remains and other artefacts buried deep within an archaeological site called Bacho Kiro Cave in central Bulgaria, situated on the foot of the Balkan Mountains.

Bacho Kiro has long been known to be a rich deposit of Palaeolithic fossils, with a number of excavations taking place in the 20th century, some of which, during the 1970s, yielded fragmentary human remains that were subsequently lost, researchers explain in a new paper.

In 2015, re-excavations at the site commenced, and the dig turned up a layer of sediment containing what looks to be the oldest human remains of our migrant ancestors ever identified in Europe – not that there's much of a family resemblance you can easily pick.

"Most Pleistocene bones are so fragmented that by eye, one cannot tell which species of animal they represent," says human evolution researcher Frido Welker from the Max Planck Institute for Evolutionary Anthropology in Germany.

In fact, of the human remains detected, only a single tooth could be determined from physical examination alone as belonging to modern humans.

But by using a mass spectrometry technique called ZooMS to find protein sequences matching H. sapiens from hundreds of unidentified bone and tooth fragments, the researchers got five hits dating back to the Initial Upper Palaeolithic.

Using a combination of methods incorporating both radiocarbon dating and sequencing of mitochondrial DNA to estimate the fossils' age, the researchers suggest these ancient humans likely occupied the cave from about 45,820 to 43,650 years ago, although some of the remains could date as far back as 46,940 years ago.

"Therefore, to our knowledge, these bones represent the oldest European Upper Palaeolithic hominins recovered to date," the authors explain in one of two new papers describing the finds. 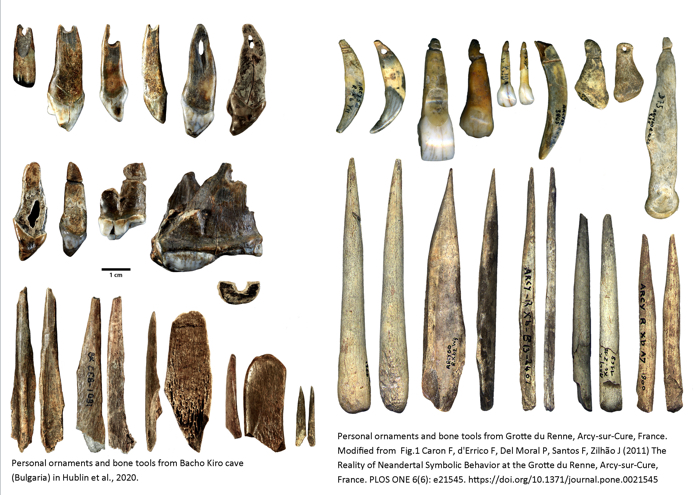 In addition to human remains, the researchers also uncovered a huge range of stone tools, along with bone artefacts from 23 different animal species, including shaped pieces such as pendants made from the teeth of cave bears, reminiscent of designs known to have later been produced by Neanderthals in what we now call France.

It's likely, the researchers say, that over the course of thousands of years, interactions between H. sapiens and Neanderthals could have influenced the latter, giving them the inspiration to fashion objects and technologies like this.

"Whatever the cognitive complexity of the last Neanderthals might have been, the earlier age of the Bacho Kiro Cave material supports the notion that these specific behavioural novelties seen in declining Neanderthal populations resulted from contacts with migrant H. sapiens," the authors write.

Others might disagree with that hypothesis, but it's clear that the discoveries as a whole, along with the new dating methods being used, are helping to give us a fuller picture on what this prehistoric turning point looked like.

The findings are reported in Nature and Nature Ecology & Evolution.