Mastering fire cleared the way into whole new worlds for early humans – from accessing more nutrients through cooking (fueling an increase in brain size), to making the dark hours useful, and surviving migrations into harsher climates.

How and when this mastery happened, however, has been lost to time, with fragments of burnt material hinting our flame taming may have begun up to 1.5 million years ago. Now, scientists used AI to detect hidden clues of campfires from a Lower Paleolithic site in Israel, dating back to around 1 million years past.

In the new study, researchers used a spectroscopic 'thermometer' that can detect minute chemical changes analyzed by deep learning algorithms, which can estimate the exposure of stones and fossils to heat.

Archeologist Zane Stepka from the Kimmel Center for Archaeological Science in Israel and colleagues used this 'thermometer' on flint artifacts from a site in Israel, dated to between 1.0 and 0.8 million years ago. 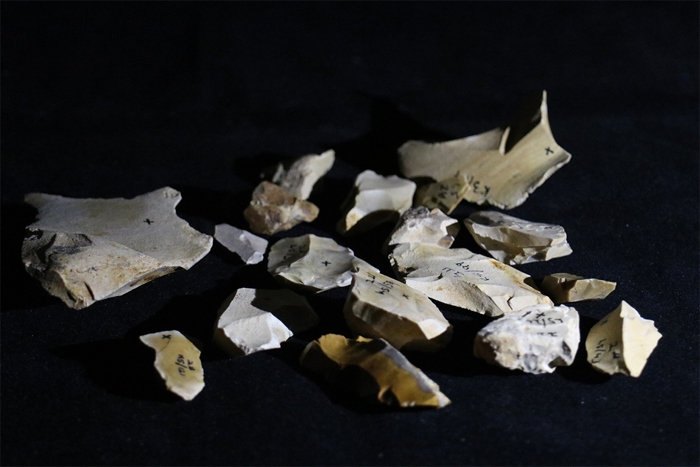 The artifacts were found alongside animal fossils within yellow-gray sand that sat on top of red loam. There was no obvious, visual indication of fire use at this site.

But the AI 'thermometer' revealed subtle chemical signatures, suggesting a number of the stone tools and pieces of tusk had been heated to a variety of temperatures, some greater than 400 degrees Celsius. This suggests they had come in contact with fire.

While the team cautions that they can't completely rule out wildfires at this point – as the site was in an open location – the clustering of tools and bones suggests early hominins were actually controlling the fire.

It was previously thought use of fire by hominins before around 150,000 years ago was only opportunistic, like the Australian raptors intentionally spreading flames to help flush out prey. But if these fires are indeed being confined to campsites, this suggests otherwise.

Only a handful of archaeological sites this old feature signs of early human artifacts alongside evidence of fire, and this adds weight to the idea our ancestors were already making use of this powerful technology back then.

Further use of the new technique could help us to reveal more about when and how we tamed the flames, the researchers say.

"Reexamining artifacts unearthed from other Lower Paleolithic sites, including those located in the Levant, may potentially broaden our spatiotemporal understanding of the relationship between early hominins and fire," the team writes.