Scientists studying a 3,200 year-old papyrus document from ancient Egypt think they've found the earliest record of the variable star Algol - a three-star system that's some 92.25 light-years away from Earth. It appears that not only could the Egyptians see the star without the aid of a telescope, its cycle influenced their religious calendars.

By applying a statistical analysis to the Calendars of Lucky and Unlucky Days recorded on the papyrus, researchers from the University of Helsinki in Finland were able to match the activities of Horus to the 2.867-day cycle of Algol. They say this strongly suggests that the Egyptians were well aware of Algol and adapted their calendars to match the variable star.

Algol is actually three stars in one - Beta Persei Aa1, Aa2 and Ab - and as these stars pass in front of and behind each other, their brightness appears to fluctuate from Earth. The fact that there's such a strong correlation between this pattern and the ancient 'Cairo Calendar' proves the Egyptians kept a close eye on Algol, the researchers say.

The calendar written on papyrus covers every day of the year, and marks religious feasts, mythological stories, favourable or unfavourable days, forecasts, and warnings for the people of Egypt. The brightest phases of both Algol and the Moon match up with positive days in the calendar for the ancient Egyptians.

Colloquially known as the Demon Star, Algol was linked to the winking eye of Medusa by early astronomers. It's one of the most well-known variable stars and is believed to be the first one that was spotted in the night sky. The official date of its discovery is put at 1669, but the new research suggests that year is out by several millennia, with the papyrus dating from around 1244 to 1163 BC. 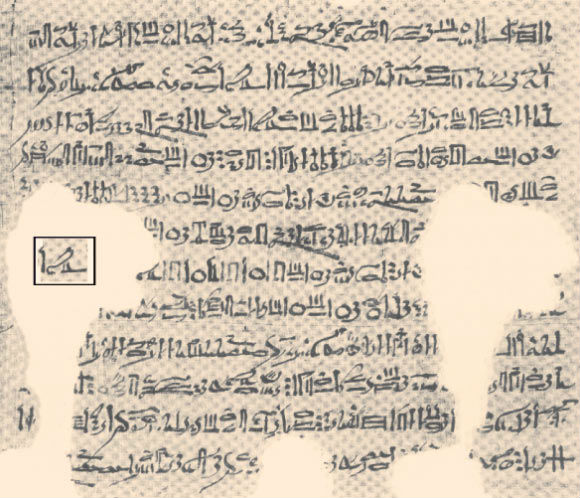 "Until now, there were only conjectures that many of the mythological texts of the Cairo Calendar describe astronomical phenomena," explained one of the team, Sebastian Porceddu. "We can now unambiguously ascertain that throughout the whole year the actions of many deities in the Cairo Calendar are connected to the regular changes of Algol and the Moon."

The new research goes much further than earlier studies of the Cairo Calendar, linking the appearance and behaviour of Egyptian deities throughout the whole year with the fluctuations of Algol. But still, the study has its critics.

"I would have serious doubts, if someone claimed, for example, that the Bible contains information about water in Mars," adds Porceddu's colleague, Lauri Jetsu. "We claimed that ancient Egyptian religious texts contain astrophysical information about Algol. It was no surprise to us that there were, and there still are, skeptics."

The work has now been published in the journal PLOS One.