Mesopotamians were using hybrids of domesticated donkeys and wild asses to pull their war wagons 4,500 years ago – at least 500 years before horses were bred for the purpose, a new study reveals.

The analysis of ancient DNA from animal bones unearthed in northern Syria resolves a long-standing question of just what type of animals were the "kungas" described in ancient sources as pulling war wagons.

The new study shows, however, that kungas were strong, fast and yet sterile hybrids of a female domestic donkey and a male Syrian wild ass, or hemione – an equid species native to the region.

Ancient records mentioned kungas as highly prized and very expensive beasts, which could be explained by the rather difficult process of breeding them, Geigl said.

Because each kunga was sterile, like many hybrid animals such as mules, they had to be produced by mating a female domesticated donkey with a male wild ass, which had to be captured, she said.

That was an especially difficult task because wild asses could run faster than donkeys and even kungas, and were impossible to tame, she said.

"They really bio-engineered these hybrids," Geigl told Live Science. "There were the earliest hybrids ever, as far as we know, and they had to do that each time for each kunga that was produced – so this explains why they were so valuable."

Above: Detail of the "War panel" of the "Standard of Ur", exhibited in the British Museum, London. Teams of kunga pull the war wagons.

Kungas are mentioned in several ancient texts in cuneiform on clay tablets from Mesopotamia, and they are portrayed drawing four-wheeled war wagons on the famous "Standard of Ur," a Sumerian mosaic from about 4,500 years ago that's now on display at the British Museum in London.

Archaeologists had suspected that they were some sort of hybrid donkey, but they didn't know the equid it was hybridized with, Geigl said.

Some experts thought Syrian wild asses were much too small – smaller than donkeys – to be bred to produce kungas, she said.

The species is now extinct, and the last Syrian wild ass – not much more than a meter (3 feet) tall – died in 1927 at the world's oldest zoo, the Tiergarten Schönbrunn in Vienna in Austria; its remains are now preserved in that city's natural history museum.

That comparison showed both animals were the same species, but the ancient wild ass was much larger, Geigl said.

That suggested that the Syrian wild ass species had become much smaller in recent times than it had been in antiquity, probably due to environmental pressures such as hunting, she said.

Historians think that the Sumerians were the first to breed kungas from before 2500 BCE – at least 500 years before the first domesticated horses were introduced from the steppe north of the Caucasus Mountains, according to a 2020 study in the journal Science Advances by many of the same researchers.

Ancient records show the successor states of the Sumerians – such as the Assyrians – continued to breed and sell kungas for centuries — and a carved stone panel from the Assyrian capital Nineveh, now in the British Museum, shows two men leading a wild ass they had captured.

The kunga bones for the latest study came from a princely burial complex at Tell Umm el-Marra in Northern Syria, which has been dated to around the early Bronze Age between 3000 BCE and 2000 BCE; the site is thought to be the ruins of the ancient city of Tuba mentioned in Egyptian inscriptions. 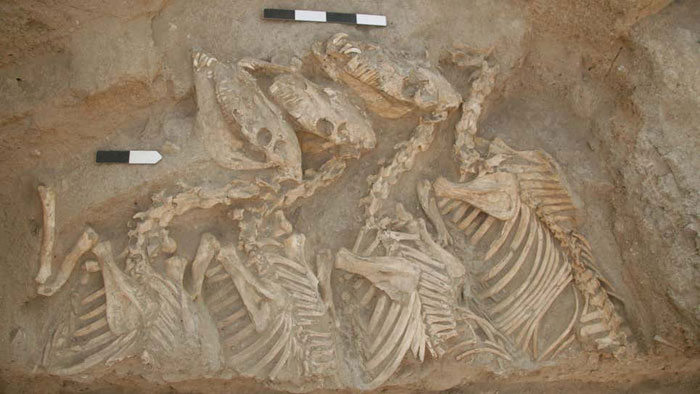 Study co-author Jill Weber, an archaeologist at theUniversity of Pennsylvania, excavated the bones about 10 years ago. Weber had proposed that the animals from Tell Umm el-Marra were kungas because their teeth had marks from bit harnesses and patterns of wear that showed they had been purposefully fed, rather than left to graze like regular donkeys, she said.

Kungas could run faster than horses, and so the practice of using them to pull war wagons probably continued after the introduction of domesticated horses into Mesopotamia, she said.

But eventually, the last kungas died and no more were bred from donkeys and wild asses, probably because domesticated horses were easier to breed, Geigl said.

The new study was published Friday (Jan. 14) in the journal Science Advances.

'Pizzly' bear hybrids are spreading across the Arctic