We don't know exactly how they do it, we just know it's an amazing gift. For decades, evidence has shown that all sorts of animals can sense magnetic fields and even use them to navigate their way around the planet.

This mysterious ability, called magnetoreception, is something that helps animals to make long-haul migrations, or even just find their way home, and it's a sense that's apparent in numerous species, whether feathered, furry, or finned.

As for humans, well, we might also have the capability of perceiving magnetic fields, although the evidence so far is scant – and even in animals, the precise origins of this magnetic awareness remain fuzzy and enigmatic. 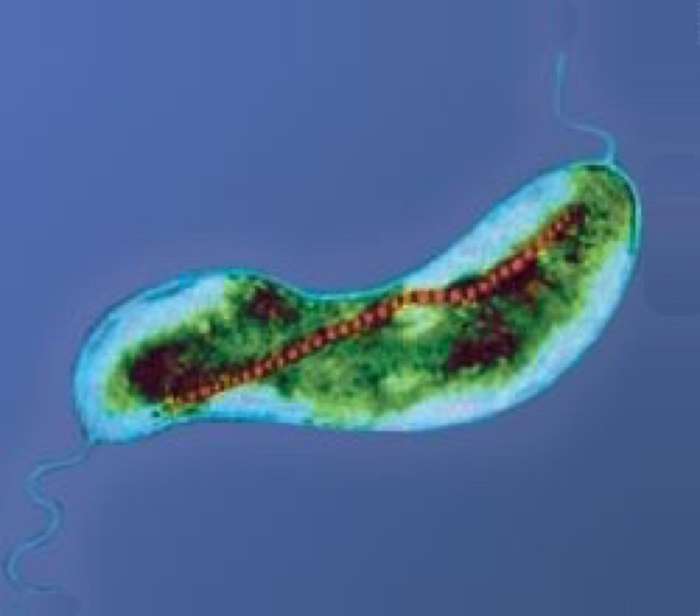 A magnetotactic bacterium and its chain of magnetosomes. (Various/Wikimedia Commons/CC BY-SA 3.0)

"The search for a mechanism has been proposed as one of the last major frontiers in sensory biology," explains wildlife genomicist Robert Fitak from the University of Central Florida.

In a new study, Fitak and his co-authors reviewed the evidence for one potential basis of animal magnetoreception, although it's worth noting that the proposed idea remains largely hypothetical.

The most established explanations for how animals might detect magnetic fields revolve around two central hypotheses. One of these is cryptochromes, a class of proteins that are sensitive to light, and which are thought to help certain animals see magnetic fields.

The second hypothesis is magnetite-based magnetoreception, in which crystal clusters of iron in animals' bodies enable them to detect magnetic fields.

However, despite much research, neither of these answers appears to be entirely conclusive, and as Fitak and his co-authors suggest, there's another possibility altogether: a compass made of microbes.

According to the researchers, it's possible that animals can detect magnetic fields symbiotically via bacteria living inside them – specifically, magnetotactic bacteria (MTB), which orient themselves along magnetic field lines due to a chain of magnetic structures inside their bodies called magnetosomes.

In a study published in 2017, members of Fitak's team proposed that these tiny magnetic microbes could be what underlies magnetoreception in larger animals, through some kind of mutually beneficial relationship. This inward-looking idea is pretty out there, and as the researchers acknowledge, their hypothesis received its share of criticisms.

Chief among them was the lack of empirical evidence for the existence of such symbiosis, along with questions about the prevalence of symbiotic MTB, and how animals might communicate with these magnetic bugs.

In the new study, the researchers seek to address those issues, along with presenting new evidence to support their case. Most importantly, they point to a study from last year, which uncovered arguable evidence of mutualistic symbiosis between MTB and microscopic marine protists, which may end up navigating differently in aquatic environments thanks to the tiny magnetic passengers on their bodies:

The researchers call this "the first conclusive experimental support" backing up their hypothesis, but their own new findings also appear to strengthen their case.

Sifting through databases of genetic information on microbes, the team found that magnetotactic bacteria, once thought to be rare, are actually much more common in the microbiome of animals than we realised, only their presence has been overlooked until now.

"MTB are not an anecdote of nature, but in fact, MTB are ubiquitous across aquatic and anaerobic environments and have a global distribution," the authors explain in their paper.

That said, as the team acknowledges, none of the new evidence directly confirms that tiny, magnet-laden microbes living inside animals are what give their hosts the amazing ability to navigate via magnetic fields. But it's an argument that's looking ever more compelling, the more we dig into it.

"The symbiotic magnetic sensing hypothesis is still a hypothesis," one of the researchers, evolutionary biologist Yoni Vortman from Tel-Hai Academic College in Israel told The Brussels Times.

"We are now in the middle of experimenting with several species of birds, testing whether antibiotics will affect their magnetic sense… We think that it's valid throughout the tree of life, from unicellular organisms (protists), through flatworms (planarians), to birds and reptiles."

The findings are reported in Philosophical Transactions of the Royal Society B.