Environment07 May 2019
By Peter Dockrill

Scientists have identified what they say could be the first evidence of a tectonic plate peeling into two separate layers under the ocean.

This epic but still hypothetical division phenomenon – to the extent we can detect it in computer modelling – could be responsible for the birth of a new subduction zone, where one of Earth's tectonic plates is driven forcefully under another.

Marine geologist João Duarte from the University of Lisbon in Portugal has been studying the seismic history of his home city for years, most famously characterised by the Great Lisbon earthquake of 1755: a massive catastrophic quake and tsunami that effectively wiped Lisbon out, killing up to an estimated 100,000 people in the process.

Centuries later, a much milder event in 1969 in the same region was also noted by seismologists, but fortunately claimed no human lives.

Yet what's strange is that these violent quakes are happening at all, since the region where they're emanating from is a sparse, abyssal plain on the seafloor alongside the Iberian Peninsula, a long way from any active tectonic faults. 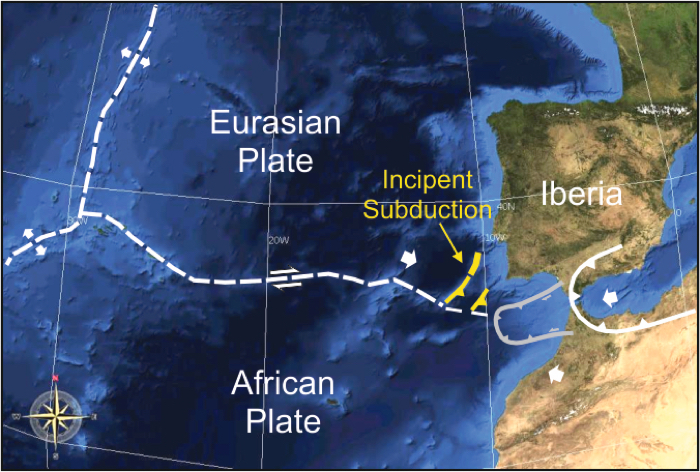 But far below this flat, unremarkable seabed landscape, something else is happening, Duarte says: something seismic.

"This seismicity is located below a seismically silent layer, interpreted as a serpentinisation front propagating down through the lithospheric upper mantle," Duarte and his team write in an abstract for new research presented last month at the EGU General Assembly 2019 in Vienna.

Serpentinisation is a geological process where rock structures absorb water, and according to the researchers, it could be responsible for the oceanic lithosphere off the coast of Portugal peeling in two, potentially triggering quakes as it rips apart.

"Several tomographic models have consistently imaged a fast-velocity anomaly extending up to a depth of 250 kilometres, right below this seismicity cluster," the researchers write.

Testing their hypothesis with computer models, the researchers' early work – which as yet has not been peer-reviewed – suggests that a serpentinisation layer in old oceanic lithosphere could generate "horizontal decoupling zones" through the oceanic plate, leading the lower, softer rock layer to 'delaminate' (tear away) from the upper layer.

If they're right – and that's a big if for now – the researchers propose that this phenomenon could be helping to create a subduction zone in the region, where one tectonic plate ends up being driven under another.

"Today, we know that the Southwest Iberian Margin is indeed being reactivated," Duarte explained in a blog post last year.

"Whether this will lead to the nucleation of a new subduction zone is still a matter of debate, and we will probably never know for sure. Nevertheless, subduction initiation is one of the major unsolved problems in earth sciences, and the coasts off Lisbon might constitute a perfect natural laboratory to investigate this problem."

Taken to one extreme, this subduction initiation process could hypothetically help underlay the foundations of an entirely new supercontinent.

In research published in 2016, Duarte and fellow researchers proposed a new conceptual model based around old, unstable oceanic lithosphere, in which "both the Pacific and the Atlantic oceans close simultaneously, leading to the termination of the present Earth's supercycle and to the formation of a new supercontinent, which we name Aurica".

That distant future – if it ever comes to pass – is many millions of years away, but Duarte for one is excited by the possibilities.

"It's a big statement," Duarte told National Geographic. "Maybe this is not the solution to all the problems. But I think we have something new here."

The findings were presented at at the EGU General Assembly 2019 held in Vienna in April.