An Antarctic Ice Shelf Is Being Shaken by Thousands of 'Ice Quakes', But Only at Night

As the frozen Antarctic landscape at the bottom of the world adjusts to an ever hotter planet, we keep finding more mysterious phenomena beneath and within the ice. Now, there are "ice quakes" to add to that list.

It wasn't all so long ago that earthquakes were thought to not exist on this unforgiving continent. Scientists know better now, and have just reported another tremulous anomaly: ice quakes that shake the frozen landscape… but only ever at night.

When darkness falls, for a 6-12 hour period during the evening, scientists investigating the behaviour of ice on the McMurdo Ice Shelf picked up these mysterious ice quake vibrations, thanks to seismometers planted across the shelf landscape. 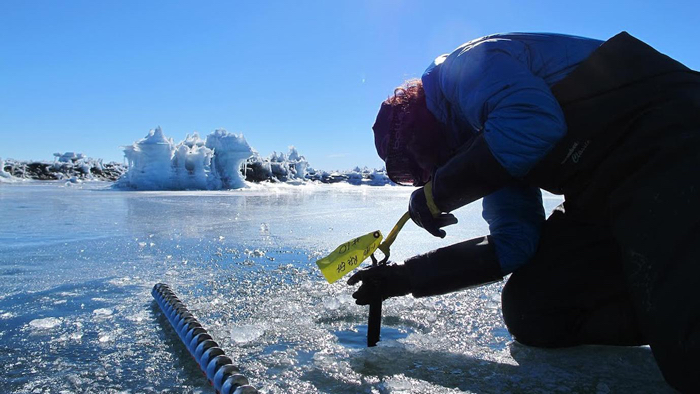 "In these areas we would record tens, hundreds, up to thousands of these per night," says glaciologist Douglas MacAyeal from the University of Chicago.

It's MacAyeal's business to study how meltwater and melting processes are affecting the Antarctic region; while it might sound surprising, it's actually melting that's responsible for setting off this nightly cavalcade of quakes.

During the Austral summer melt season (November 2016 to January 2017), the researchers set up seismometers in two different locations 20 kilometres apart (just over 12 miles apart) on the McMurdo Ice Shelf.

They called the sites the 'dry station' and the 'wet station', in reference to how much melting behaviour the areas exhibited.

At the wet station, the slushy ice produced pools of water on the ground during the day, whereas the dry station was notably less prone to meltwater despite the heat of sunlight.

But that wasn't the only difference observed between these two environments.

Each night, the wet station came alive with hundreds or thousands of fleeting ice quakes generated by natural activity and lasting less than a second each time.

By contrast, seismic activity detected at the dry station was markedly different, and seemed to be caused by human activity (probably vehicles on a nearby road used by the research team).

As for the quakes at the wet station, it's not the first time scientists have observed diurnal cycles of seismicity on an ice shelf like this – but it's never before been linked with ice-shelf melting and surface hydrology, which is what the researchers propose is going on here.

"In these ponds, there's often a layer of ice on top of melted water below, like you see with a lake that's only frozen on top," MacAyeal says.

"As the temperature cools at night, the ice on the top contracts, and the water below expands as it undergoes freezing. This warps the top lid, until it finally breaks with a snap."

The seismic phenomenon could ultimately help scientists remotely monitor glacier melting, the researchers hypothesise, because wherever the ice quakes are springing up, that's also where melting processes are the strongest.

Backing up their admittedly "modest seismometer deployment" with models that simulated the same phenomenon, the team conclude that "thermally regulated seismicity may exist on all ice shelves that undergo surface melting and freezing, especially those that have lost their protective, insulating firn layer".

Of course, for now, the team's explanation is probably best viewed as a hypothesis, until further evidence comes along to support it one way or the other.

Tragically, however, we might not have to wait too long.

With Antarctica now rapidly melting all over the place, there's never been a better time to investigate the origin of these dark tremors.

The findings are reported in Annals of Glaciology.