A macabre 'plague pit' containing 48 skeletons has been uncovered at Thornton Abbey, Lincolnshire in the UK – a mass grave of villagers who fell victim to the Black Plague.

The discovery, which includes the remains of 27 children, is an extremely rare find in the UK - despite the devastation unleashed by the deadly plague during the 14th century, this represents only the third confirmed mass burial site tied to the pandemic.

"Despite the fact it is now estimated that up to half the population of England perished during the Black Death, multiple graves associated with the event are extremely rare in this country," says lead researcher Hugh Willmott from the University of Sheffield, "and it seems local communities continued to dispose of their loved ones in as ordinary a way as possible."

While conventional burials may have been the norm, in extreme circumstances local communities would have been overwhelmed by the Black Death, the team says, resorting to disposing of huge numbers of corpses at once. 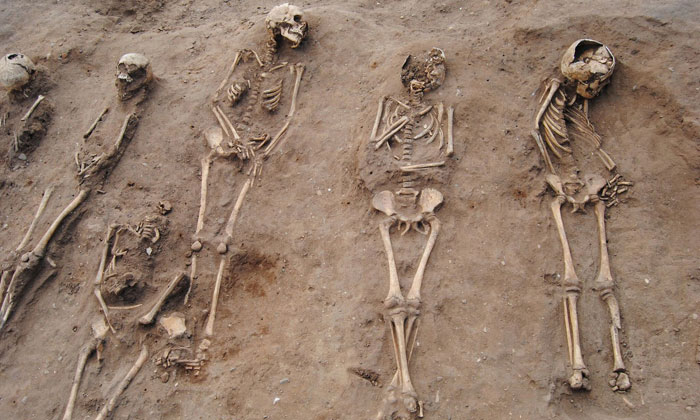 "The finding of a previously unknown and completely unexpected mass burial dating to this period in a quiet corner of rural Lincolnshire is thus far unique," Willmott says, "and sheds light into the real difficulties faced by a small community ill prepared to face such a devastating threat."

The Black Death, often singled out as the deadliest plague humanity has ever faced, is estimated to have killed 75 to 200 million people, with the peak of the pandemic occurring in Europe between 1346 and 1353.

The infection, caused by the bacterium Yersinia pestis, reached Lincolnshire in the spring of 1349, where it killed unknown numbers of local adults and children in a matter of days.

"Mass burials are a signal of when the system has broken down," Willmott told Haroon Siddique at The Guardian. "This community had obviously reached a point where it could not cope."

The researchers say the bodies here were not heaped on top of one another, but carefully laid out in rows, with the placement of children overlapping adults suggesting possible family groups.

The plague killed quickly – with infected people dying within three to five days – so it's likely that the bodies here were brought to the abbey from a nearby monastery hospital, to receive last rites from the priests.

While those last rites may have been administered, the clergy couldn't offer these poor souls traditional burials due to the great numbers of infected. So the church and townspeople would have been forced to dig mass graves, the kind of which researchers have only seen in London before now.

"The only two previously identified 14th century sites where Yersinia pestis has been identified are historically documented cemeteries in London, where the civic authorities were forced to open new emergency burial grounds to cope with the very large numbers of the urban dead," Willmott says in a press release.

The excavation, which began in 2011, discovered various belongings in addition to human remains, including a pendant called a Tau Cross, worn to ward off sickness – but which sadly could offer no protection from the scourge of the Black Death.

"[It] was found in the excavated hospital building," says Willmott.

"This pendant was used by some people as a supposed cure against a condition called St Antony's fire, which in modern day science is probably a variety of skin conditions." 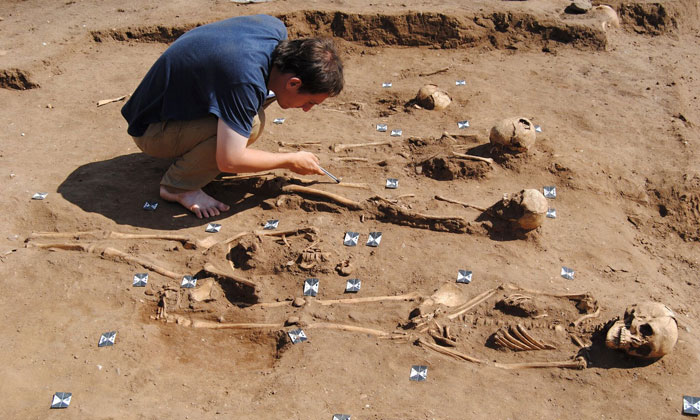 To confirm the discovery, the archaeologists sent teeth samples from the skeletons to researchers at McMaster University in Canada, who extracted DNA from the tooth pulp.

Tests confirmed the presence of Yersinia pestis, but while it's only the third such Black Death mass grave found in England, there could be many more, hidden by vegetation and the passage of time.

"Before we began the dig the site was just an ordinary green field grazed by sheep for hundreds of years, but like many fields across England, as soon as you take away the turf, layers of history can be revealed by archaeology," says Willmott.

The research is ongoing, so the researchers haven't published any of their findings as yet.

But they intend to further study the bodies back in the lab, to try to figure out which of the skeletons were related in life, what their health and diet was like, and even look for clues as to their livelihoods.

"We don't focus just on their deaths," Willmott told The Guardian.

"Archaeologists tend to see the point as learning about these people in life. We know now they died from the Black Death, but this was a living, breathing community. What can these skeletons tell us about their lives before their funeral?"

You can find out more on the excavation in the video below: