Ancient archaeological sites across the Northern Hemisphere have been littered with a mystery. Where there were hominins, there too could often be found roughly rounded spheres of stone. Some have been dated back to over 2 million years ago, with marks suggesting that the balls had been deliberately shaped.

New research has discovered a plausible purpose for these strange tools: Our ancestors could have been using them to smash open bones - to get to the nutritious marrow inside.

An international team of researchers led by archaeologist Ella Assaf of Tel-Aviv University in Israel made a close examination of ten such stones found at Qesem Cave, a Lower Paleolithic site occupied by early humans between 400,000 and 200,000 years ago.

This is curious, because it's the latest known appearance of these tools, a timeframe when other communities had long ago stopped using them. So Assaf and her team investigated to find out more about these stones, and how they got there.

Not only did they find evidence supporting the stones' use in bone marrow extraction on the stone artefacts themselves, they smashed open bones with replicas to determine their efficacy. Spoiler: bones were smashed, marrow extracted.

"We present new results from Middle Pleistocene Qesem Cave on the use of these implements as percussion tools," the researchers wrote in their paper.

"As bone marrow played a central role in human nutrition in the Lower Paleolithic, and our experimental results show that the morphology and characteristics of shaped stone ball replicas are well-suited for the extraction of bone marrow, we suggest that these features might have been the reason for their collection and use at Qesem Cave." 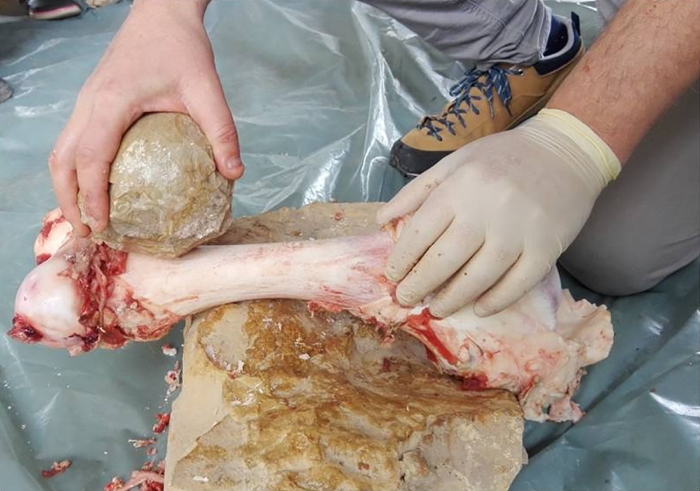 The team took a double-pronged approach to studying the purpose of the balls.

First, they thoroughly examined 29 ancient balls found in the cave. These are not perfectly rounded stones, but have rough ridges where flakes have been knapped away.

All but one of them - one was flint - were made out of dolomite or limestone distinct from other rocks found in the area, and they had a different patina from other tools found in the cave. This suggests the stone balls had been stored in a different environment for some time before ending up at Qesem Cave.

This is interesting, because it is consistent with earlier findings on other tools in the cave. Whoever the inhabitants were, they had a habit of finding tools in other places and bringing them home for their own use. In other words, they recycled.

Of these 29 stone balls, 10 retained traces of use-wear and residue, so the team conducted digital stereomicroscopy and metallographic microscopy to examine them more closely. They analysed residues found in the marks associated with the use-wear, and made an interesting discovery.

"In particular, on the top of the prominent ridges, residues appear as spots of organic film with a glossy and often striated appearance. They coexist with spots of crushed amorphous white  residues consistent with bone fat and collagen fibers sometimes also smeared and crushed onto the tools' scars."

That brings us to the second prong. Based on the use-wear scars and residue patterns, the team first knapped their own balls out of different kinds of rock, then tested them on cow and sheep bones. They also tested naturally shaped smooth stones.

And they found that the replicas of the Qesem Cave stones were the most efficient at cracking open bone to get to the marrow therein, and that the ridges help crack the bone in a clean break.

This suggests that the cave inhabitants were smart enough to know a good thing when they saw it. Why perform the arduous work of making a new tool when a perfectly fine one was available?

This also matches up with research published last year. Another team of researchers presented evidence that bone marrow was a very important part of the diet of the unknown hominins who inhabited Qesem Cave - so important that they would store it for up to nine weeks, to keep a rich food source available for later consumption.

So not only do we know that bone marrow was deeply important to the inhabitants of the Qesem Cave, we also know that they were pretty savvy when it came to food resources.

"These results shed light on the function of shaped stone balls and are consistent with the significance of animal fat in the caloric intake of Middle Pleistocene humans as shown by the archaeozoological evidence at Qesem Cave and possibly beyond," the researchers wrote.

But as to what the balls were used for before they came to Qesem Cave? Well, that's still a big old mystery waiting to be solved.