To many, ancient Egypt is synonymous with the pharaohs and pyramids of the Dynastic period starting about 3,100BC. Yet long before that, about 9,300-4,000BC, enigmatic Neolithic peoples flourished. Indeed, it was the lifestyles and cultural innovations of these peoples that provided the very foundation for the advanced civilisations to come.

But who were they? As it turns out, they haven't actually been studied much, at least relative to their successors. But our excavations of six burial sites – with some of the analyses recently published – have now provided important insights into their mysterious ways of life.

One reason why we know so little about Neolithic Egypt is that the sites are often inaccessible, lying beneath the Nile's former flood plain or in outlying deserts. 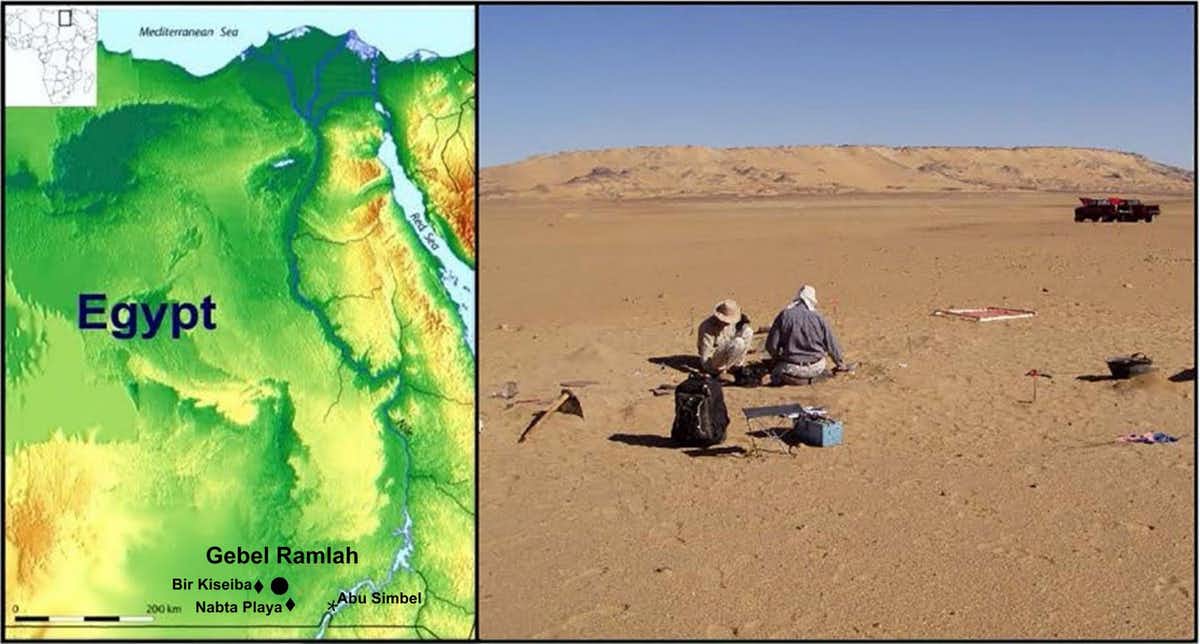 With permission from Egypt's Supreme Council of Antiquities (SCA) we – members of the Combined Prehistoric Expedition – explore Neolithic sites in Egypt's western desert. The sites we are currently excavating lie along the former shores of an extinct seasonal lake near a place called Gebel Ramlah.

Though not lush, the Neolithic was wetter than today, which allowed these ancient herders to populate what is now the middle of nowhere. We focus on the Final Neolithic (4,600-4,000BC), which was built on the success of the Late Neolithic (5,500-4,650BC) with domesticated cattle and goats, wild plant processing and cattle burials.

These people also made apparent megaliths, shrines and even calendar circles – which look a bit like a mini Stonehenge.

During the final part of the Neolithic period, people started burying the dead in formal cemeteries. Skeletons provide critical information because they are from once living people who interacted with the cultural and physical environments. Health, relationships, diet and even psychological experiences can leave telltale signs on teeth and bone. 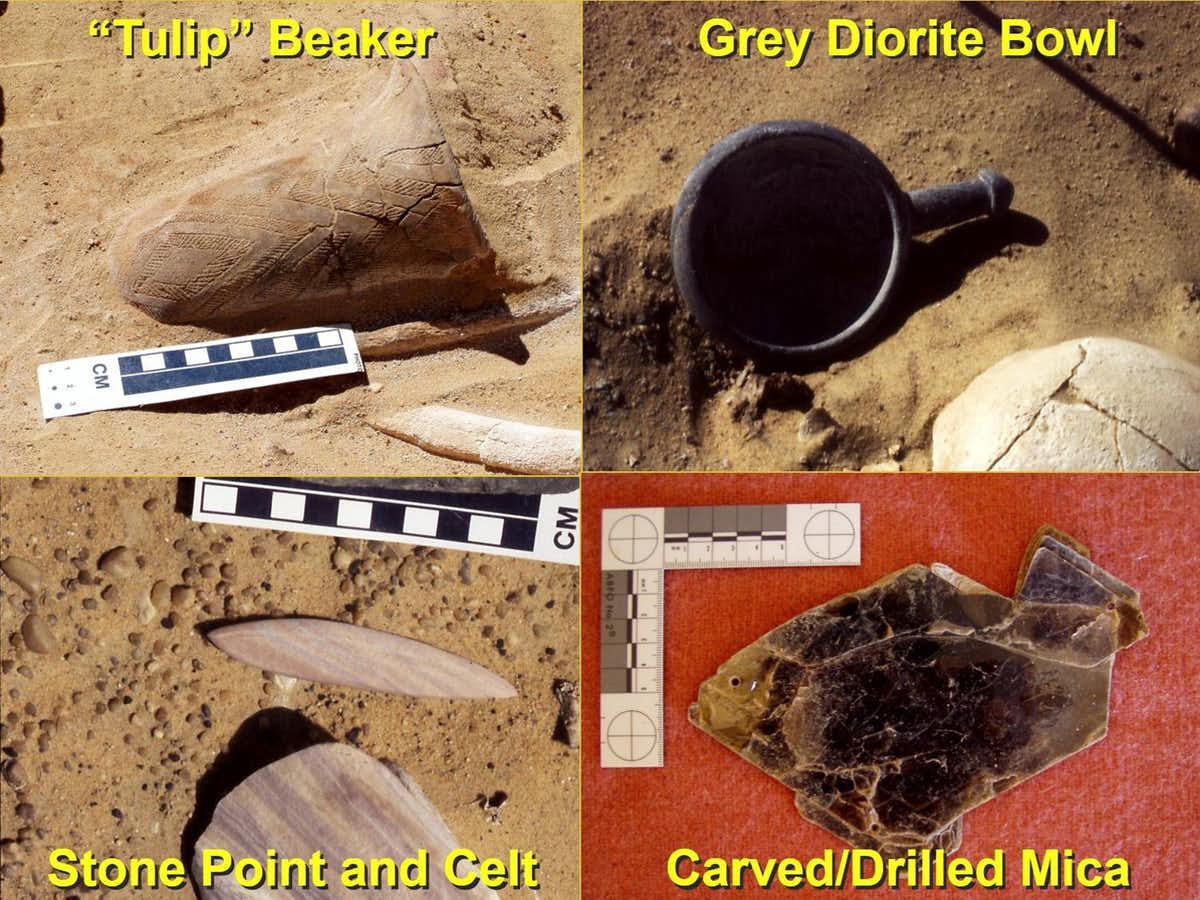 In 2001-2003 we excavated three cemeteries from this era – the first in the western desert – where we uncovered and studied 68 skeletons. The graves were full of artefacts, with ornamental pottery, sea shells, stone and ostrich eggshell jewellery.

We also discovered carved mica (a silicate mineral) and animal remains, as well as elaborate cosmetic tools for women and stone weapons for men.

We learned that these people enjoyed low childhood mortality, tall stature and long life. Men averaged 170cm, while women were about 160cm. Most men and women lived beyond 40 years, with some into their 50s – a long time in those days.

Strangely, in 2009-2016, we dug two more cemeteries that were very different. After analysing another 130 skeletons, we discovered that few artefacts accompanied them, and that they suffered from higher childhood mortality as well as shorter lives and stature.

Astonishingly, the largest of these two cemeteries had a separate burial area for children under three years of age, but mostly infants including late-term foetuses. Three women buried with infants were also found, so perhaps they died in childbirth. In fact, this is the world's earliest known infant cemetery.

So what can this tell us about these peoples, let alone their descendants? As it turns out, a lot. We can use the findings to make interpretations about gender, life-stage, well-being, status and other things.

For example, why were there such differences between the two grave sites? They could have been separate populations, but it is unlikely based on overall physical similarities. So perhaps they imply variation by status – with one graveyard being for the elite and the other for workers. This is the earliest such evidence in Egypt.

The sites also shed light on the family structures of the time. The overall sex ratio across all cemeteries is three women to each man, which may indicate polygamy.

However, the total number of burials and a lack of reference to individual houses suggests these were extended family cemeteries.

We also believe that attainment of "personhood" – the age children are socialised into being "people" – was from three years, given their inclusion in adult cemeteries.

There is also clear evidence of respect for previously buried people by later mourners reusing the graves to bury their dead. When coming across old skeletons, they often carefully repositioned the bones of these ancestors.

In some interesting cases, they even made attempts to "reconstruct" the skeletons by replacing teeth that had fallen out back into the skeleton – and not always correctly (see lead image).

These behavioural indicators, together with the seemingly innovative technological and ceremonial architecture mentioned earlier, such as the calendar circles and shrines, imply a level of sophistication well beyond that of simple herders. Taken together, the findings provide a glimpse of things yet to come in Ancient Egypt.

A key component of our work involves conservation of Egyptian (and world) heritage. We found no evidence of grave looting, unlike for sites in the Nile Valley.

The last people to touch Neolithic material at Gebel Ramlah lived during that time. However, wind-related erosion has reached a point where once-buried remains lie on or near the surface. 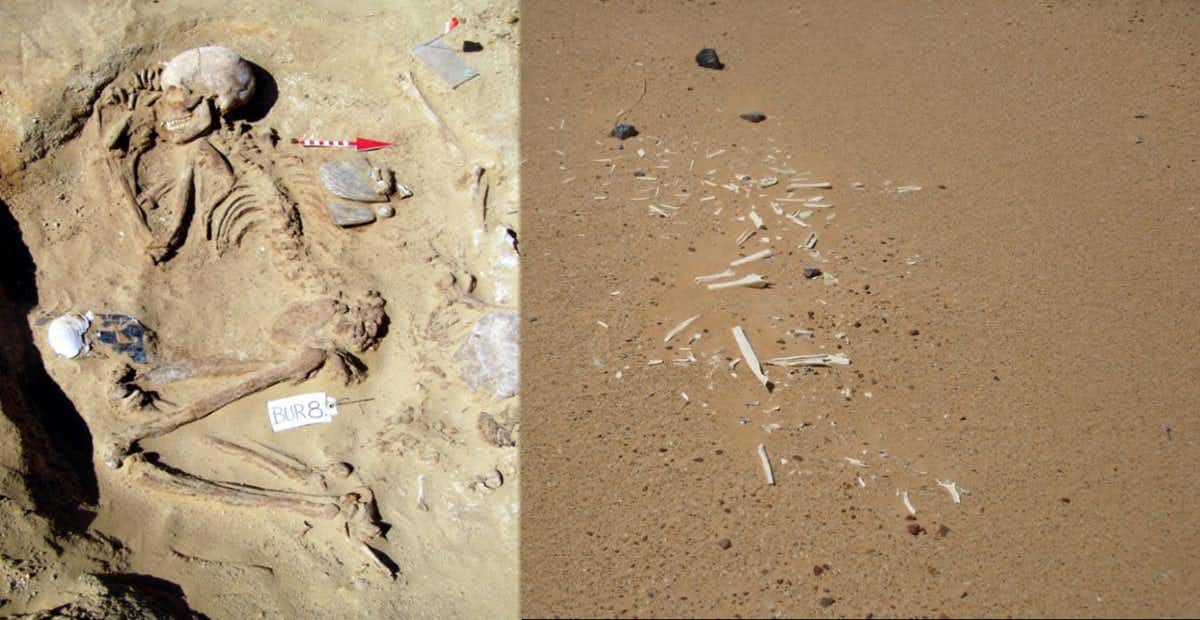 In fact, the pace of destruction has increased significantly since 2001. Once exposed, the context of these sites can be lost and organic material can get sandblasted to bits.

This means that if we hadn't discovered these remains when we did, they would have soon been lost forever. But sadly this likely means that other sites from the time are literally disappearing.

For that reason, we and the SCA have decided that, when we have studied our material, all will be reburied on site to, hopefully, survive for thousands more years.