The ruins of a palace dating back to the Bronze Age have been uncovered by archaeologists on the banks of the Tigris river – described by some as a "sensation" of a discovery, it could reveal new details about the mysterious Mittani Empire.

Although the Mittani dominated swathes of northern Mesopotamia and Syria between 1500 and 1300 BCE, we don't know much about them. This ancient palace could help fill some gaps in that period of history.

The site is Kemune, in the Mosul Dam reservoir of Iraqi Kurdistan, and archaeologists have been working here for nearly a decade. A team comprising Kurdish and German researchers was able to uncover the palace thanks to receding waters in the reservoir. "The find is one of the most important archaeological discoveries in the region in recent decades and illustrates the success of the Kurdish-German cooperation," says archaeologist Hasan Ahmed Qasim from the University of Duhok in Iraqi Kurdistan.

Archaeologists say two distinct phases of use can be identified, suggesting the impressive palace was a key part of the Mittani Empire for an extended period of time. Originally, the building would have stood on an elevated terrace overlooking the Tigris Valley.

The palace would have been around 20 metres (nearly 66 feet) from where the eastern bank of the Tigris river originally was, built on a huge terrace wall of mud-bricks.

"In the second millennium BCE, murals were probably a typical feature of palaces in the Ancient Near East, but we rarely find them preserved," says archaeologist Ivana Puljiz from the University of Tübingen in Germany.

"So discovering wall paintings in Kemune is an archaeological sensation." 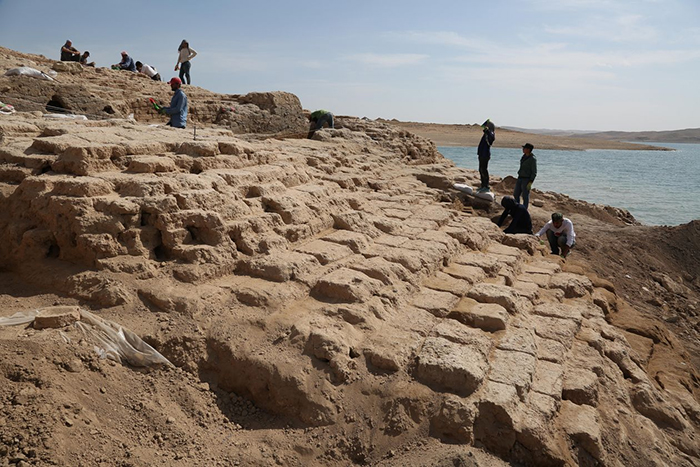 Work has begun to translate the tablets recovered from the Kemune dig, but initial observations suggest this is the site of the ancient city of Zakhiku, established around 1800 BCE and lasting for at least 400 years or so.

Experts are hoping that these writings can help us understand more about the politics, economy, movements, and history of the Mittani Empire, which at its peak would have stretched from the eastern Mediterranean coast to the east of what is northern Iraq today.

Based on ancient writings – including records of marriages – historians know that Mittani royalty interacted as equals with the Eygptian pharaohs, but we know much less about the Mittani than we do about their neighbours.

Most information so far has come from sources from other countries and civilisations. And it's only because of the receding waters of the Mosul Dam, caused by a severe drought during 2018, that Kemune has been exposed at all. Having known about the site for years, archaeologists were finally able to move in.

"The Mittani Empire is one of the least researched empires of the Ancient Near East," says Puljiz.

"Information on palaces of the Mittani Period is so far only available from Tell Brak in Syria and from the cities of Nuzi and Alalakh, both located on the periphery of the empire. Even the capital of the Mittani Empire has not been identified beyond doubt."