Way out in the Australian desert, a new observatory is making history. In a little more than a year, the Australian Square Kilometre Array Pathfinder (ASKAP) has detected a tremendous 20 of the mysterious signals known as fast radio bursts.

They also include the brightest and closest fast radio bursts ever detected.

"We've also proved that fast radio bursts are coming from the other side of the Universe rather than from our own galactic neighbourhood," said astrophysicist Ryan Shannon of Swinburne University of Technology and OzGrav ARC Centre of Excellence.

Fast radio bursts (FRBs) are one of space's most intriguing mysteries. They are extremely powerful, generating as much energy as hundreds of millions of Suns.

But they are also extremely short, lasting just milliseconds; and most of them only occur once, without warning.

This means they can't be predicted, so it's not like astronomers are able to plan observations. Unless a radio telescope - which has a relatively narrow field-of-view - is looking at exactly the right section of the sky when one of these bursts fires, that burst is going to be missed.

No wonder that prior to this latest data from ASKAP, we only had recorded 34 FRB sources.

The telescope array is the technology pathfinder project for the upcoming Square Kilometre Array, and it only commenced science observations in January 2017. Because it's so new, it's equipped with some really interesting technology. 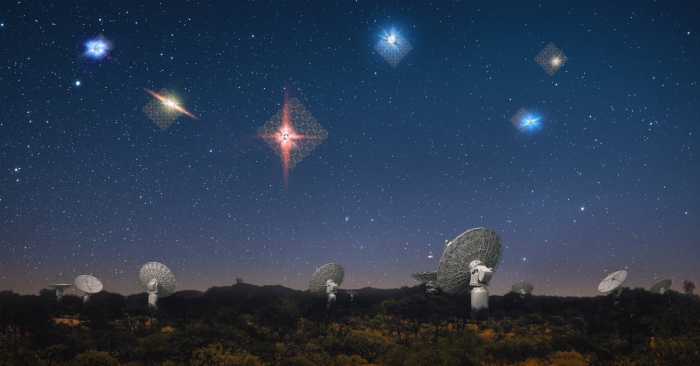 What gives the observatory its edge is something called the phased array feed (PAF), a specially developed receiver that enables a much wider field of view.

Each PAF is sensitive to 30 square degrees of the sky. With up to 12 available radio antennas pointed at a different region of the sky, this enables amazingly comprehensive coverage.

"By using the telescope's dish antennas in a radical way, with each pointing at a different part of the sky, we observed 240 square degrees all at once - about a thousand times the area of the full Moon," explained research engineer Keith Bannister of the CSIRO.

And by closely analysing the light that the telescope received for each burst, the team has been able to learn a little bit more about these tricky, mysterious space signals.

"Although these things only last for about a millisecond, their radiation dribbles in over a timescale of a few hundred milliseconds to even a second. And that's because the longer wavelength's radiation, the redder radiation, arrives fashionably late compared to the blue radiation," astronomer Jean-Pierre Macquart of Curtin University said in a press conference.

"This is an indication that the burst has travelled through a lot of matter in the Universe."

"This is a key characteristic of these bursts that we haven't been able to interpret up until now - and the finding is … that these bursts are actually coming from halfway across the Universe."

According to Macquart, those wavelength readings indicate the FRBs caught by the team are coming from at least 7 billion light-years away.

Timing the arrival of the radiation has allowed the scientists to learn more about the gas between the galaxies, also known as the intergalactic medium, which is quite tenuous and difficult to study.

So that's pretty cool. But we still don't know what causes FRBs, or even where they come from - and honestly, it's pretty perplexing, especially if they're coming from so far away. Because in order to be visible from Earth from so far away, the event or object that causes them has to be extraordinarily bright.

So the next step in trying to unravel this enigma is to locate precisely which galaxies the bursts are coming from. That will take us a step closer to homing in on what they are.

"We'll be able to localise the bursts to better than a thousandth of a degree," Shannon said.

"That's about the width of a human hair seen ten metres away, and good enough to tie each burst to a particular galaxy."