The Most Distant Single Star Was Just Detected, as Ancient as The Cosmic Dawn

From billions of light-years across the vast gulf of space-time, from the very dawn of the Universe, astronomers have detected the light of a single star.

Its discoverers have nicknamed it Earendel, from the Anglo-Saxon word meaning "morning star"; to date, it is the most distant object of its kind ever detected, dating to just 900 million years after the Big Bang.

Because Earendel's light has traveled so far to reach us, its properties are difficult to discern, but follow-up observations have already been approved for the James Webb Space Telescope.

The first billion years of the Universe's history following the Big Bang 13.8 billion years ago, also known as the Cosmic Dawn, are very difficult to see. Not only is it murky and dark very early, when the first stars and galaxies form, it's also extremely distant. Even finding quasars, the brightest objects in the Universe, stretches the capabilities of our technology and analysis techniques.

But there's a quirk of gravity that can show us small, distant things that might otherwise be beyond our reach. It's called gravitational lensing, and it has to do with the gravitational curvature of space-time around massive objects, such as galaxies and galaxy clusters.

If a massive object is at exactly the right place between us and a more distant object, light from that distant object will travel along the gravitational space-time curvature. This has the effect of an absolutely enormous magnifying glass: The light from the distant object may be smeared and distorted, but it's also magnified and often duplicated. 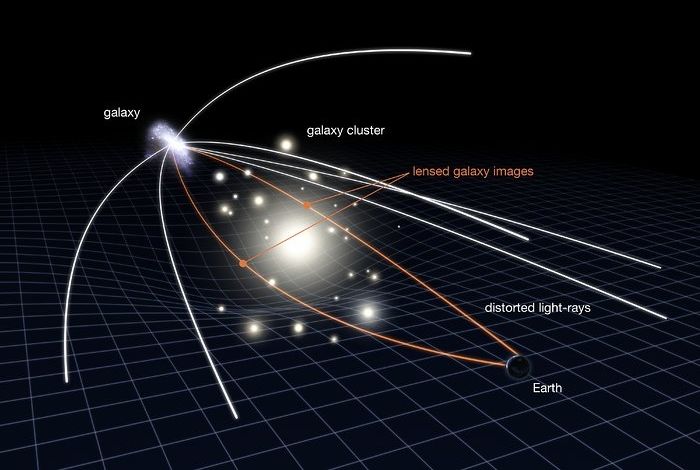 Astronomers can then reverse-engineer the light to figure out what the magnified object was. At the distance of the Cosmic Dawn, these smears usually turn out to be galaxies.

The home galaxy of Earendel, whose real name is the rather less pretty WHL0137-LS, was first picked up by the Hubble Space Telescope as just such a smear, magnified by a massive galaxy cluster. There, within the galaxy, a team led by astrophysicist Brian Welch of Johns Hopkins University found a single bright object sitting right on top of the lensing critical curve.

Across 3.5 years of observations, Earendel's brightness did not change. This, coupled with its location, suggested that it's not transient, but a bright star in the right place at the right time.

We know how far away it is, because of how stretched the light is. The expansion of the Universe causes light waves to attenuate, a property known as redshifting. Astronomers estimate the distance of early Universe objects based on the redshift of the light.

An analysis of the UV light from Earendel suggested the object is around 50 times the mass of the Sun. But more detail than that is too difficult to tease out from the available data. We don't know the spectral classification of the star, for instance, which would be useful.

We have seen some very ancient stars that have survived billions of years, but more massive stars tend to die younger, so knowing what type of star it is would elucidate the Universe's early evolution just a smidge.

We don't even know if it is one lone star, or a binary with a combined mass of around 50 solar masses. In the latter case, however, known massive binaries usually consist of one much more massive star that is emitting most of the system's light, and the team expects that would also be the case with Earendel.

The earliest star ever spotted could tell us some interesting things about the early Universe. We haven't, for instance, been able to observe the processes that led to light being able to stream freely throughout the Universe, known as Reionization. Astronomers believe stars and galaxies were behind it, but have no direct observations of how it unfolded.

We've seen galaxies in the Cosmic Dawn. Narrowing our understanding down to the types of individual stars that were around at the time would be very interesting indeed.

Time has been approved for Webb to take spectroscopic observations of Earendel, which Welch and his colleagues hope will reveal more information about the star, including its age, classification, a more detailed mass, and whether or not it's a binary system.